The highlight race of the Oaklawn Park spring meeting is the $1 million Arkansas Derby (G1), for 3-year-olds run at 1 1/8 miles and worth 100 points to the winner as part of the Kentucky Derby Championship Series. Conditions were excellent for the 17,000 fans in attendance in Hot Springs with sunny skies, a fast track, and temperatures in the mid 60's. Concert Tour was sent off as the 3-10 favorite in the field of 6, undefeated in 3 starts including the San Vicente (G2) and Rebel Stakes (G2). In to challenge him included 7-2 second choice Caddo River, 5th in the Rebel after winning the Smarty Jones, and 9-1 third choice Hozier, 2nd in the Rebel.

Jockey Florent Geroux sent Caddo River to the lead first time by and he set fractions of 22.62, 46.51, and 1:11.25 while pressed by Concert Tour and stalked by 12-1 fourth choice Super Stock. Turning for home, Concert Tour took over the lead through 1 mile in 1:37.64 but Super Stock, who sat 2 wide under Ricardo Santana Jr. the whole way, came out for room at the 1/8 pole and rallied by to win by 2 1/2 lengths over Caddo River in 1:50.92. It was a head back to favorite Concert Tour third. 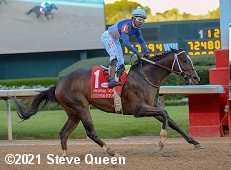 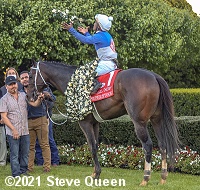 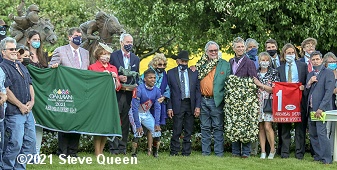 Left: Super Stock in the winner's circle. Winning trainer Steve Asmussen said, "The horse has just been touting himself, getting better and better. It truly is just a blessing to have this sort of success. My mom and dad (co-owners) to be here, what the horse has already meant to the family – to win the Arkansas Derby on such a beautiful day."

Right: The trophy presentation for the Arkansas Derby. Asmussen added, "(Tactically it set up) perfectly. We wanted to use his post position. I thought he used his post position into the first turn extremely well. Those horses went :46 2/5 for a half-mile. Plenty solid factions, carried him nicely. He got up behind them a little quicker than he thought he would, obviously, in the stretch. My confidence level was he was going to run really good. I've been in races like that, that you have no control over how good or bad somebody else runs. But I felt like that he was going to represent extremely well." 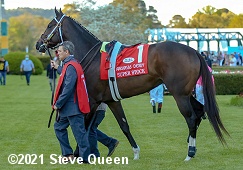 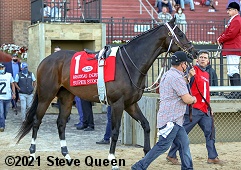 Left: Super Stock in the infield walking ring. Winning jockey Ricardo Santana Jr. said, "We got a beautiful trip. I was talking to Mr. Steve (Asmussen) for about two weeks about this race. The post was perfect. We both liked breaking from post 1. We knew there was some speed and everything came out perfect. It was a really important win for Steve and his family. I'm really blessed to be the one they chose to ride this race."

Right: Super Stock heads out to the track. 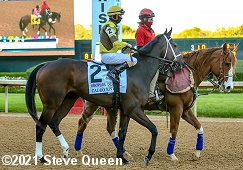 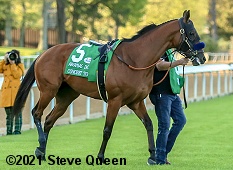 Left: Second place finisher Caddo River in the post parade. Trainer Brad Cox said, "I thought we gave him the best opportunity to win. It's kind of tough. Beat the four horses we thought we had to beat. Obviously, a very good horse won the race. I'm very proud of our horse's effort. I thought we got a good trip. He did all the running and battled back to be second. He was passed and battled back to be second. Overall, I thought it was a very good effort."

Right: Third place finisher and beaten favorite Concert Tour in the infield walking ring. Trainer Bob Baffert said, "He's there and just got tired there at the end. He's a young horse. It was a good race, but I was more disappointed in my other horse (last place finisher Hozier), he got tired early. Those things happen. You get beat and try to figure out – they're still young and they're still having these races. Sometimes, you learn more from a loss than a win. Right now, he got beat. I can make any excuses for him right now." 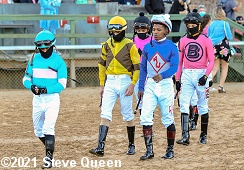 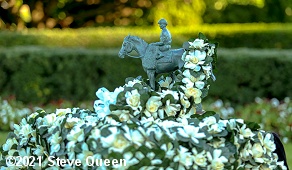 Left: The jockeys for the Arkansas Derby walk over to the infield before the race. Jockey Joel Rosario aboard favorite Concert Tour (post 5) added, "Everything was going the right way. I was happy where I was, following (Caddo River). I got to him. He kept going, but (Super Stock) came strong on the outside. He tried hard. He was moving good, doing everything right. That horse that won came running today."

Right: The trophy and flowers for the Arkansas Derby. 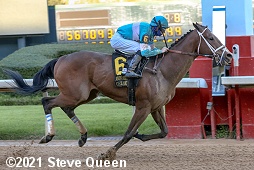 Immediately before the feature was the $500,000 Count Fleet Sprint Handicap (G3) featuring a field of 7 older horses sprinting 6 furlongs. Last year's winner and Breeders' Cup Sprint (G1) champion Whitmore was sent off as the 11-10 choice over 2-1 second choice C Z Rocket, winner of the Hot Springs Stakes, and 4-1 third choice Strike Power, an allowance winner after finishing 5th in the King Cotton Stakes.

8-1 No Parole was quickest out of the chute through an opening quarter of 21.92 before Strike Power took over on the far turn through a half in 45.35 while stalked by 52-1 longest shot Mr. Jagermeister and favorite Whimore. Turning for home, C Z Rocket, 6th early under Florent Geroux, came out 6 wide to sweep to the front through 5f in 57.53. Whitmore came through between horses for his rally but it was too late as C Z Rocket drew off to win by 2 lengths in 1:09.62. It was another 1 1/2 lengths back to 21-1 Empire of Gold third. 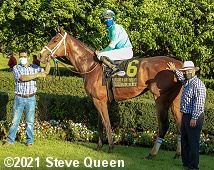 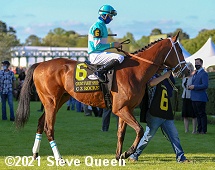 Left: C Z Rocket in the winner's circle. Winning trainer Peter Miller said, "Very similar race (to the Hot Springs). We were behind Whitmore again and we had to give up a lot of ground, but we didn't get stopped, either. You trade one for the other. Whitmore's a great horse and ran a great race, as always. He's a champion. I think that race (Hot Springs) tightened him (C Z Rocket) up good. I think that definitely set him up good for this."

Right: C Z Rocket in the infield walking ring before the race. Winning jockey Florent Geroux said, "Great trip. All the speed was what it looked like on the pp's. Tried to find a nice rhythm with him and when he was ready to go, I just tipped him out and tried to run everyone down. I got him (Whitmore) again. Two nice horses. My horse was a little bit unlucky with the trip in the Breeders' Cup. Whitmore had a great trip that day. They are very similar. Looks like my horse was a little bit better today." 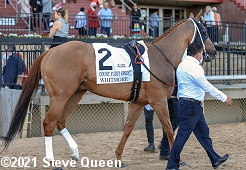 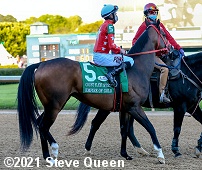 Right: Third place finisher Empire of Gold in the post parade. Jockey David Cabrera said, "At the quarter pole, I felt like I could win. I had Whitmore on the inside of me and I said, 'I got this, you know.' He made a kick for a little bit and then he got tired. He just got tired." 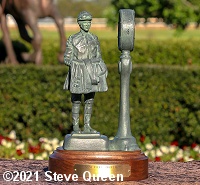 Left: The trophy for the Count Fleet Sprint Handicap.

Right: The post parade for the Count Fleet Sprint Handicap. 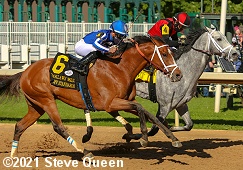 The $400,000 Oaklawn Mile Stakes featured a field of 9 older horses going 1 mile around 2 turns. Breeders' Cup Dirt Mile (G1) 7th place finisher Rushie was sent off as the 9-5 favorite over 2-1 second choice By My Standards, 7th in the Clark (G1), and 4-1 third choice Blackberry Wine, 4th in the Mineshaft (G3) before winning an allowance last out.

Jockey Ramon Vazquez sent 21-1 Pioneer Spirit to the lead first time by and he set fractions of 23.21, 47.82, and 1:12.68 while pressed by Rushie and stalked by Blackberry Wine. Turning for home Pioneer Spirit tired as Rushie inherited the lead through 7f in 1:25.55. However, By My Standards, 5th early under Gabriel Saez, came out 5 wide for room and rallied to win by a nose in 1:37.82. It was another 2 1/2 lengths back to 13-2 fourth choice Wells Bayou third. 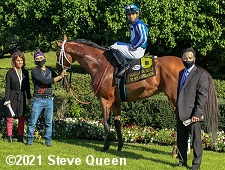 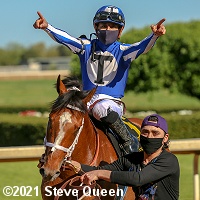 Left: By My Standards in the winner's circle. Winning trainer Bret Calhoun said, "He really was well prepared, but I was more concerned about the short stretch mile, honestly. He's just a really good horse and he keeps overcoming. Honestly, I thought he might get shuffled back a little farther than he did. I thought Gabe did a great job getting him in a very good position early without having to use too much horse. It kind of played out like we thought. There was quite a bit of speed in there. Some of the horses on the outside had speed and they had to make some quick decisions. Gabe just rode a great race. Fortunate enough to get him in a good spot early. It took every bit of that stretch to get there."

Right: By My Standards returns after the race. Winning jockey Gabriel Saez said, "I was trying to get that one position I wanted on the first turn. I got bounced around a little bit, but I relaxed and just tried to keep in that striking position. I was worried about (Rushie) inside of me a little bit, but when I saw him go through, I started to go after him. When we turned for home, my horse just left them and kicked in the extra gear I was expecting from him. Luckily we got there." 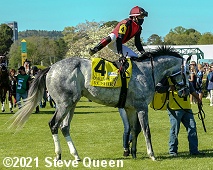 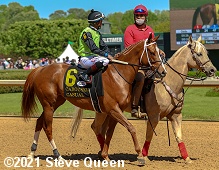 Right: Third place finisher Wells Bayou heads out to the track before the race. Trainer Brad Cox said, "Ran real well. Thought it was a big effort. Kind of pulled a little bit up the backside, but when he caught daylight down on the inside he was able to get a clean run in the lane and ran on. I thought it was a very good effort."

The horses break from the gate for the Oaklawn Mile. 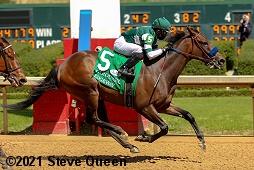 Kicking off the Saturday stakes action was the $250,000 Carousel Stakes featuring a field of 6 older fillies and mares sprinting 6 furlongs. American Beauty Stakes winner Frank's Rockette was sent off as the even-money favorite over 6-5 second choice Edgeway, an allowance winner last out at Santa Anita, and 9-2 third choice Casual, 2nd in the Spring Fever Stakes.

Jockey Francisco Arrieta sent 11-1 Wildwood's Beauty to the lead out of the chute through an opening quarter of 22.54 before Edgeway moved up 3 wide on the turn to take over through a half in 46.12 and 5f in 58.08 under Joel Rosario. Frank's Rockette put in a strong rally from 5th but Edgeway held her off to win by 3/4 length in 1:10.13. It was another 1 1/4 lengths back to Casual third. 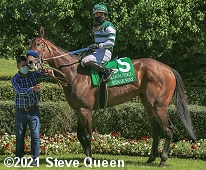 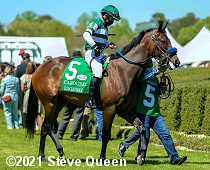 Left: Edgeway in the winner's circle. Winning jockey Joel Rosario said, "She broke really well and a couple of horses came up alongside of us and she doesn't mind, she was really good."

Right: Edgway heads out to the track before the race. 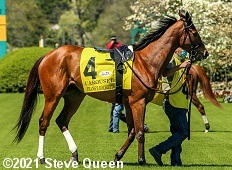 Right: Third place finisher Casual in the post parade. The Steve Asmussen trainee improved her record to 3 wins, 1 second, and 2 thirds in 9 starts, earning $219,325 for owner-breeder