The highlight race of the Oaklawn Park spring meeting is the $1 million Arkansas Derby (G1), a major prep for the Kentucky Derby run at 1 1/8 miles on closing day. The crowd of 63,804 enjoyed sunny skies and temperatures in the low 80's. Bodemeister was sent off as the 2-1 favorite in the field of 11 off his win in the San Felipe Stakes (G2) last out at Santa Anita. In to challenge him include his stablemate and 5-2 second choice Secret Circle, winner of both the Southwest (G3) and Rebel (G2), the local prep path for this event, and 9-2 third choice Optimizer, second in the Rebel last out.

Jockey Mike Smith sent Bodemeister to the lead first time by and he set quick fractions of 23.02, 46.55 and 1:11.36 over the fast track while pressed by 8-1 Stat, with Secret Circle stalking the pair in third. On the turn, Stat tired badly allowing Secret Circle to inherit second and get within 2 lengths of his stablemate. However, Bodemeister kicked clear through the stretch to win going away by 9 1/2 lengths in 1:48.71. It was just a neck back from Secret Circle to late-running 12-1 Sabercat third.

Also check out Plum Pretty winning the Apple Blossom and Alternation winning the Oaklawn Handicap during the Racing Festival of the South at Oaklawn. 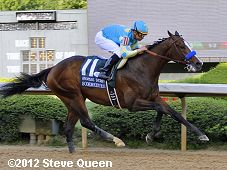 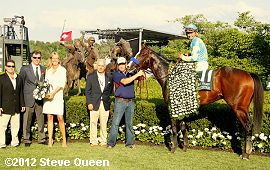 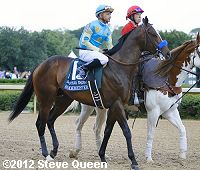 Left: Bodemeister in the winner's circle. Trainer Bob Baffert said, “That was an exciting win. So impressive. When he broke his maiden, he ran a race like that, and he had been working really well, too, at Santa Anita. Bodemeister should be in great shape. He ran hard and fast. We know distance won't be a problem. That was a 1 1/8 mile workout for him.” 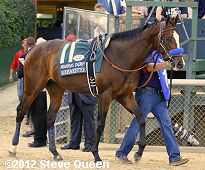 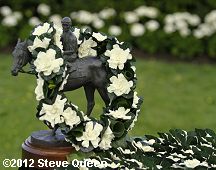 Left: Bodemeister heads out of the paddock before the race. Jockey Mike Smith said, “I was out front by about a length or so and I set him down just in case anyone was coming. I looked up on the board and I was like seven in front. That was ultra impressive.”

Right: The Arkansas Derby trophy and flowers waiting in the winner's circle before the race. 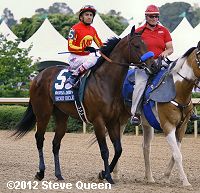 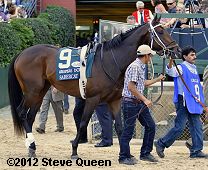 Left: Second place finisher and beaten favorite Secret Circle in the post parade. Trainer Bob Baffert said, "We took some really nice horses there. They all ran well and had been training well. I have a great staff and (assistant trainer) Jimmy Barnes does a great job. We'll see what this took out of them and then we'll start talking (Kentucky) Derby. Oaklawn is a very kind surface and the horses have been coming back great."

Right: Third place finisher Sabercat heads of the paddock before the race. Trainer Steve Asmussen said, "I was very pleased with it; it was encouraging. It was the step in the right direction we were expecting and looking for, the move forward we needed. It looked like a very good experience for him. We needed to see improvement and at this time of year, that's the important thing in each start." 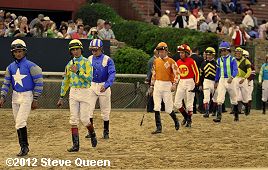 Left: The jockeys for the Arkansas Derby before the race.

Right: The horses break from the gate for the 2012 Arkansas Derby. 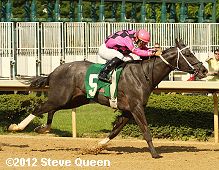 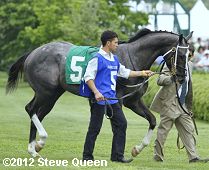 The $100,000 Northern Spur Stakes featured a field of 5 three-year-olds going 1 mile. Drill was sent off as the 3-5 favorite over 8-5 second choice Explain and 5-1 third choice Master Rick.

Winning jockey Corey Nakatani said, "It's a great day for Steve (5 wins on the card), and I am really happy to be part of his team, and for the owners. As for the race, it shaped up a little better than I thought it would. I was biding my time and about the 1/2 mile pole I let him out a little bit and when Drill came to me I opened up a little bit on him, hoping it would work and it did." 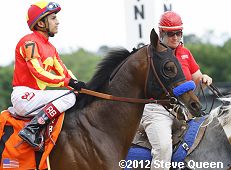 Second place finisher and beaten favorite Drill in the post parade. The Bob Baffert trainee has enough graded stakes earnings to run in the Kentucky Derby and was entered here to try 2 turns. Baffert said before the race, "Every time I've tried two turns, I've put him in the deep end of the pool. He's working really well, and we'll just see how he handles it. It might give him more opportunities if he handles it."