The feature race on the Friday of Arkansas Derby week is the $500,000 Apple Blossom Handicap (G1), for older fillies and mares going 1 1/16 miles. short field of just five faced the starter, with Plum Pretty sent off as the 1-2 favorite, unraced since finishing a distant sixth in the Breeders' Cup Ladies' Classic (G1). In to challenge her included 2-1 second choice Tiz Miz Sue, off her win in the Azeri Stakes (G3), the major local prep for this event, and 15-2 third choice Absinthe Minded, fourth in the Azeri after winning the Bayakoa and the Pippin.

Jockey Calvin Borel sent 9-1 Twelve Twenty Two to the lead first time past the stands and she set fractions of 23.89 and 47.54 while stalked by Plum Pretty to her outside. On the turn, Plum Pretty took over the lead through 3/4 in 1:11.73, with Absinthe Minded moving up to challenge as Twelve Twenty Two tired and dropped back. Through the stretch, Plum Pretty opened up on the field, and cruised past the post 2 1/4 lengths in front of Absinthe Minded in 1:42.64 over the fast track. It was just a neck back to late-runnng Tiz Miz Sue third.

Also check out Bodemeister winning the Arkansas Derby and Alternation winning the Oaklawn Handicap during the Racing Festival of the South at Oaklawn. 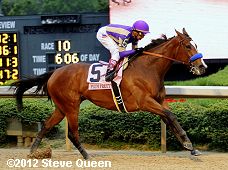 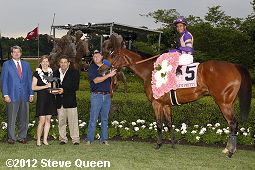 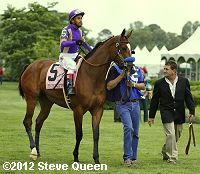 Left: Plum Pretty in the winner's circle. Winning trainer Bob Baffert said, "We had some anxious moments at the start but once he got her into gear she just dragged him around there. She's always been sort of a big filly but her frame is filling out and it was great to get her back and get a win in there. I don't know (where her next start will be); she comes home Sunday and as soon as she tips me off that she's ready to run again, we'll find a spot for her."

Right: Plum Pretty in the infield saddling area before the race. 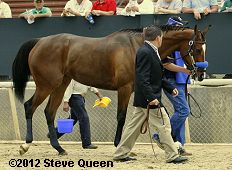 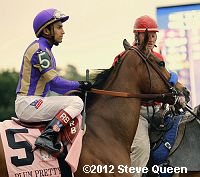 Left: Plum Pretty heads over from the barns before the race. Jockey Rafael Bejarano said, "She felt really, really good. I missed the first jump a little bit. She kind of came away from there on the wrong foot, but I think about it and it was the best thing that happened. If she had fired out of there, she might have gone up there head and head with that other filly. I saw the other filly get sent and that was good for me. She was great relaxing and after a half-mile I felt in total control. She was ready to go when I asked her." 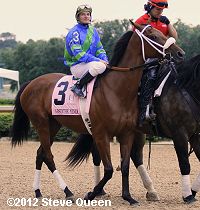 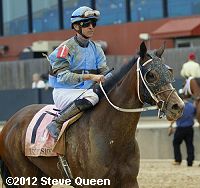 Left: Second place finisher Absinthe Minded in the post parade. The 15-2 third choice stalked the pace in third under jockey Terry Thompson, passed the tiring pacesetter but was no match for the winner. The D. Wayne Lukas trainee improved her record to 6 wins, 6 seconds, and 3 thirds in 30 starts, earning $500,661 for owner-breeder Briland Farm. 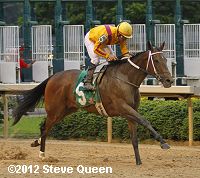 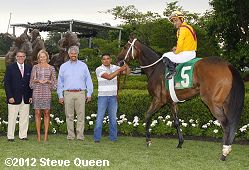 The $100,000 Instant Racing Stakes featured a field of 9 three-year-old fillies going 1 mile. Morrow Cove was sent off as the 6-5 favorite over 8-5 second choice Glinda the Good and 11-2 Zapper Belle.

Winning trainer Steve Asmussen said, "I'm very happy that even though she's been facing some of the top horses of her generation, she's still moving forward. Today was the most responsive. When he gathered her up, she accelerated nicely. I think we can try her in graded company now that we have two listed victories. She's a very nice homebred. She may be a lot fun this summer." Jockey Corey Nakatani added, "She got in a little going around the first turn, but coming down stretch, I had so much horse. When I asked her, she opened up and was impressive. She has a bright future ahead of her." Back to Horse-Races.Net main page