The $1 million Arlington Million Stakes (G1) celebrated its 36th renewal on Saturday afternoon at Arlington International Racecourse near Chicago. Conditions were excellent at the historic suburban Chicago oval, with sunny skies and temperatures in the mid 80's, with the turf rated firm. The race is also a Breeders' Cup Challenge "Win and You're In" qualifier for the Turf. A field of 9 older horses contested this 1 1/4 mile turf contest, with last year's Secretariat (G1) winner Oscar Performance sent off as the 9-5 favorite off his win in the Poker (G3). In to challenge him included 5-2 second choice Robert Bruce, 6th in the Manhattan (G1) after winning the Fort Marcy (G3), and 4-1 third choice Almanaar, winner of the Gulfstream Park Turf Handicap (G1).

Jockey William Buick sent 8-1 Century Dream to the lead first time by and he set fractions of 23.66, 48.28, and 1:12.96 while pressed by 7-1 Money Multiplier and stalked by Oscar Performance. Entering the lane, Century Dream continued to lead through 1 mile in 1:37.96 as Oscar Performance slowed down badly to be pulled up at the finish. Century Dream had a 2 length advantage at the 1/8 pole but Robert Bruce, 8th early under Irad Ortiz Jr. after bumping with Oscar Performance at the start, came out 6 wide for the drive and outfinished Almanaar by 1/2 a length in 2:02.29. It was another 2 lengths back to pacesetter Century Dream third. However, Jose Valdivia Jr. aboard fourth place finisher 36-1 Catcho En Die, claimed foul for interference against William Buick aboard Century Dream. The stewards disqualified Century Dream and placed him fourth. 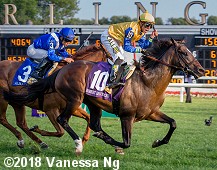 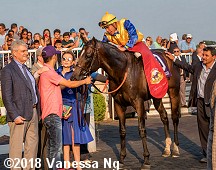 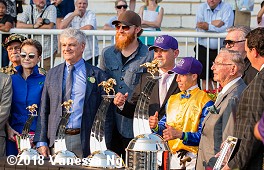 Left: Robert Bruce in the winner's circle. Owner Carlos Levin said, "The jockey was fantastic. When he entered the straight and he was in last place, I said, 'Oh, maybe he's too far back.' But, this horse has a change of speed that is incredible. He always starts the same, he makes us suffer. This is unexpected. To breed a horse in Chile and come all the way to Chicago to win this great prize (the first Chilean-bred winner of the Million) is really wonderful. I'm very glad to be in Chicago, nice city and nice people."

Right: The trophy presentation for the Arlington Million. Winning trainer Chad Brown said, "I love it here at Arlington. We circle these races and we've been blessed to have horses good enough for them. He's got an unbelievable kick (Robert Bruce), but so did the losing horse. They both ran tremendous. I may run him once before the Breeders' Cup, possibly the Joe Hirsch (Turf Classic)." 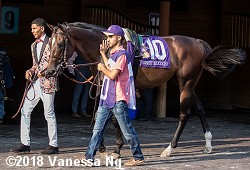 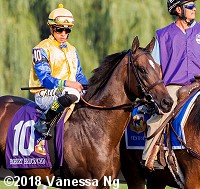 Left: Robert Bruce in the paddock before the race.

Right: Robert Bruce in the post parade. Winning jockey Irad Ortiz Jr. said, "The horse was doing so well, we were very positive, so thank God everything went perfect for us. It's great to ride a winner (on his 26th birthday). It wasn't easy for him but today was a smaller field, a little more speed. So thank God I didn't have any traffic. I put him in the clear on the stretch. On the backside I didn't want to fight with him, just wanted him to be happy on the backside, so when I turned to the backside and went to the 10-path I didn't panic." 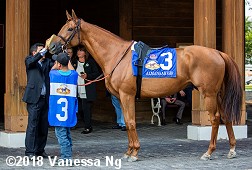 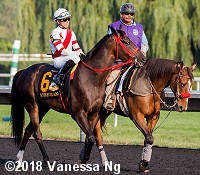 Left: Second place finisher Almanaar in the paddock. Jockey Joel Rosario said, "He's a nice horse, he ran really well. He gave me everything he had. I thought for a second we were going to be there but the outside horse (Robert Bruce) came with a strong finish. He always tries to do that (be rank early). He wanted to pull a little bit, but like I said I thought we were going to get there, but the outside horse came on strong."

Right: Third place finisher (moved up via disqualification) Catcho En Die returns after the race. He improved his record to 5 wins, 1 second, and 1 third in 10 starts, earning $302,054 for owner-trainer Naipaul Chatterpaul and co-owner Sotirios Sakatis. William Buick, aboard 3rd place finisher disqualified to fourth Century Dream said, "Simon (Crisford, trainer) was always very confident of riding a horse positively and he's real honest game horse and I thought there was a chance that everyone was going to be looking at each other and that no one really wanted the lead. We were kind of an underdog in the race so I figured we'd try our best and make something of it." 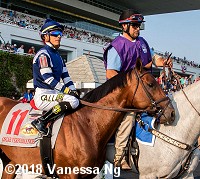 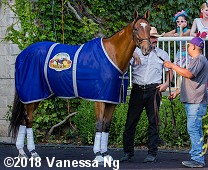 Left: Favorite Oscar Performance, who pulled up and was vanned off, heads out to the track before the race. Trainer Brian Lynch said, "We watched him cool out here at the barn and everything seems intact. Obviously tomorrow morning will be the tell-tale, but as of right now it looks good."

Right: Illinois-bred 2015 Arlington Million winner The Pizza Man made an appearance in the walking ring and winner's circle before the race.

On to the Beverly D. won by Sistercharlie
On to the Secretariat Stakes won by Carrick