The $1 million Arlington Million Stakes (G1) celebrated its 35th renewal on Saturday afternoon at Arlington International Racecourse near Chicago. Conditions were excellent at the historic suburban Chicago oval, with partly cloudy skies and temperatueres in the low 70's. The race is also a Breeders' Cup Challenge "Win and You're In" qualifier for the Turf. A field of 12 older horses contested this 1 1/4 mile turf contest, with last year's 3rd place finisher Deauville sent off as the 9-5 favorite off his 2nd place finish in the Icon Meld Stakes (G3) at the Curragh. In to challenge him included 9-2 second choice Beach Patrol, last year's Secretariat Stakes (G1) winner but 3rd in the United Nations (G1) at Monmouth last out, and 6-1 third choice Mekhtaal, 6th in the Prince of Wales's (G1) at Royal Ascot after winning the Prix d'Ispahan (G1) at Chantilly. 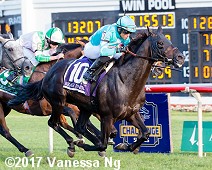 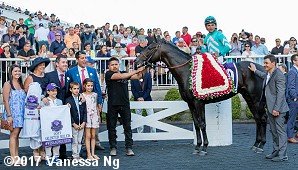 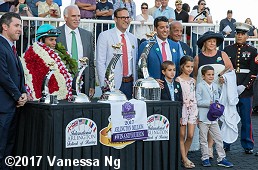 Left: Beach Patrol in the winner's circle. Winning owner Sol Kumin said, "This was the spot and the race we've been waiting for a year. He loves it here, Joel gave us a great ride, obviously Chad (Brown) and his team had the horse ready and we're super happy. It's funny I've seen the trophy and Chad always talked about this is the best trophy in horse racing. It's always been on the bucket list and I'm super fortunate to be here with my kids and dad. It doesn't get much better than this." 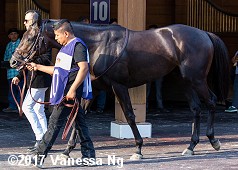 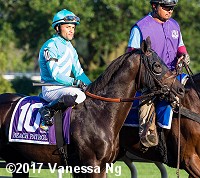 Left: Beach Patrol in the paddock before the race. Winning jockey Joel Rosario said, "They told me I had to get him out of the gate and get into a good position and let him find himself. It took a little bit of time, but he really found his way after. I appreciate the chance and the opportunity to be able to ride him today." 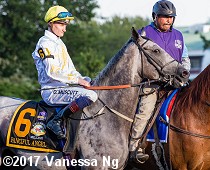 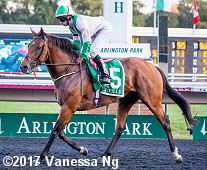 Left: Second place finisher Fanciful Angel in the post parade. Jockey Daniel Muscutt said, "We had a good spot on the rail and he cruised around. Got space at the right time, they were just one better at the end. I'm delighted."

Right: Third place finisher and beaten favorite Deauville returns after the race. Jockey Ryan Moore said, "I think he ran a very good race. He had his chance, maybe the trip stretched him."

The entire field of the Arlington Million in the post parade. Santo Sanjur aboard pacesetter Oak Brook (post 1) said, “My horse ran a really good race, I was in the lead easy and he was comfortable. The other horses beat me but he ran his race.” Frankie Dettori aboard 10th place finisher Mekhtaal (post 13) added, “The trip was terrible, he stumbled out of the gate and we were caught wide. We had eleven horses to pass and I never quite got him running. We got stopped numerous times.”

Jockey Florent Geroux sent 31-1 Crewman to the lead first time around the far turn through fractions of 25.19, 49.58, and 1:13.82 while pressed by 5-1 Applicator and stalked by 11-2 Postulation. Near the end of the backstretch Applicator gained a short lead from the tiring Crewman through a mile in 1:49.96. On the turn, jockey Jorge Vargas Jr. sent Postulation to the lead through 10f in 2:07.65. Taghleeb, last early, came out 3 wide into the lane and put in a strong late rally but was Postulation easily cruised to a 2 1/4 length win in 2:49.45. It was another 1 1/2 lengths back to favorite Keystoneforvictory third. 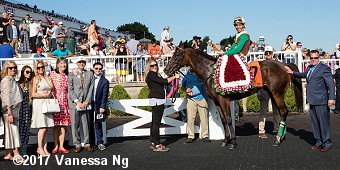 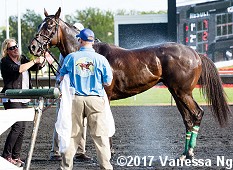 Left: Postulation in the winner's circle. Winning trainer Eddie Graham said, "When you watch his race at Delaware Park Alex said he couldn't even pull him up and that the outrider had to pull him up. I didn't think there was a question and I thought he would get it done. I don't know, I guess this is just luck here [on previously winning with Hardest Core in 2014 and today]."

Right: Postulation gets hosed off after the race. Winning jockey Jorge Vargas Jr. said, "I wanted to relax him – that was the plan since it was such a long race, but he wanted to be on the pace. When I asked him, he just took off." 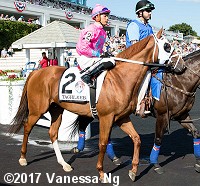 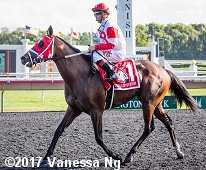 Left: Second place finisher Taghleeb heads out for the post parade. Jockey Jose Ortiz said, "I had a good trip, very clean. At the three-quarter pole I had to check a little bit, and wait for [Keystonetovictory] to go forward."

Right: Third place finisher and beaten favorite Keystoneforvictory returns after the race. Jockey Julien Leparoux said, "We had a good trip, we sat behind really good. From the three-quarter pole to the wire we were in the clear and he ran good. He was trying."

On to the Beverly D. won by Dacita
On to the Secretariat Stakes won by Oscar Performance