The feature race on the Saturday before New Year's at Santa Anita was the $300,000 American Oaks (G1) for 3-year-old fillies going 1 1/4 miles on the turf, starting on the downhill chute, and is the last Grade 1 race of the year. Just 10,158 fans came out on a sunny Saturday afternoon with temperatures in the low 60's, with the turf course rated firm. Californiagoldrush was sent off as the 2-1 favorite in the field of 8, winner of the Sands Point (G2) at Belmont after finishing third in the Del Mar Oaks (G1). In to challenge her included 7-2 second choice Paved, 12th in the Breeders' Cup Filly and Mare Turf (G1) after finishing a close second in the Rodeo Drive (G1), and 4-1 third choice Amandine, winner of the Lady Shamrock Stakes on Opening Day and running back on 3 days rest.

Jockey Tyler Baze sent 90-1 longest shot K P Pergoliscious to the lead first time by and she set fractions of 24.02, 47.86, 1:11.95, and 1:35.84 over the firm going while pressed by Amandine and stalked by 10-1 Princess Warrior and 81-1 Retro. K P Pergoliscious continued to lead to midstretch through 1 1/8 miles in 1:47.88, but 5-1 fourth choice Competitionofideas, last for the first mile under Joel Rosario, came out 4 wide into the lane, taking over inside the 1/8 pole to win going away by 2 3/4 lengths in 1:59.77. It was a head back to Amandine third, while favorite Californiagoldrush was wide throughout and showed no rally finishing 7th beaten 6 1/4 lengths. 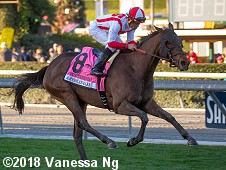 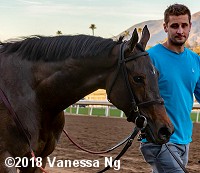 Left: Competitionofideas in the winner's circle.

Right: Competitionofideas heads back to the barn after the race. Jose Hernandez, assistant to winning trainer Chad Brown said, "It's great to finish out the year like this. This filly had settled in real good here at Santa Anita and she was doing good coming into this race. She finished up really strong today." Retired Hall of Fame jockey Laffit Pincay Jr. presented the trophy on his 72nd birthday. Pincay added, "It's nice to be here and to be able to present the trophy for a race like this. Chad Brown is a great trainer and Rosario is a good, good friend." 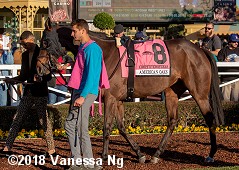 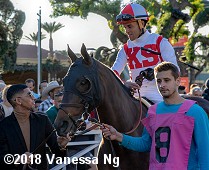 Left: Competitionofideas in the paddock.

Right: Competitionofideas in the walking ring. Winning jockey Joel Rosario said, "She broke well, we saved ground, and we took one shot. I thought we would be closer but everybody wanted their spot so I just let her settle. I always have to thank everybody for giving me the chance to ride here again and I really appreciate everybody. My plan for 2019 is just to see how it goes and go from there. We'll see what happens." 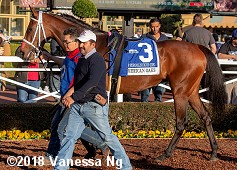 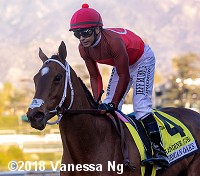 Left: Second place finisher K P Pergoliscious in the paddock before the race. Jockey Tyler Baze said, "She's a really nice horse. This is what she wants, a mile and a quarter, a mile and a half." 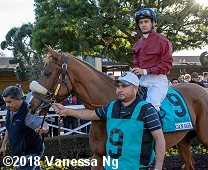 Seventh place finisher and beaten favorite Californiagoldrush in the walking ring. The Neil Drysdale trainee improved her record to 3 wins, 0 seconds, and 1 third in 5 starts, earning $322,345 for owner-breeder Alice Bamford.

The undercard feature was the $150,000 Robert J. Frankel Stakes (G3) for older fillies and mares going 1 1/8 miles on the turf. The race was originally run ast he San Gordonio Handicap but was renamed for the late Hall of Fame trainer, who won the race a record 8 times. Fahan Mura was sent off as the 8-5 favorite in the field of 8, 12th in the Matriarch (G1) after finishing second in the Goldikova (G2). In to challenge her included 9-4 second choice Excellent Sunset, 8th in the Matriarch after winning the Kathryn Crosby, and 5-1 third choice Quebec, 5th in the Kathryn Crosby after finishing second in the Swingtime Stakes.

Jockey Edwin Maldonado sent Fahan Mura to a clear lead first time by and she set fractions of 23.48, 47.43, and 1:11.15 while pressed by Quebec and stalked by 8-1 Sweet Charity. Entering the stretch, Fahan Mura continued to lead by 2 lengths through 1 mile in 1:34.78. Excellent Sunset, 4th early under Rafael Bejarano, came out for the drive and put in a strong rally but Fahan Mura easily held her off by 3/4 length in 1:46.85. It was another length back to Quebec third. 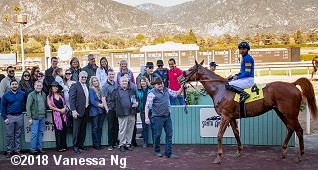 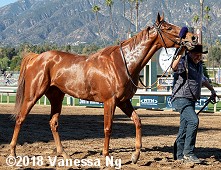 Left: Fahan Mura in the winner's circle. Winning trainer Vladimir Cerin said, "The fractions were good for her, but they were good for her last time, too. For some reason, she just didn't fire. I leave it in Edwin's hands. He's improved her by letting her be herself. He never interferes with her. He's a big reason she's doing well."

Right: Fahan Mura heads back to the barn after the race. Winning jockey Edwin Maldonado said, "She's a really fun horse to ride. She's become so much more professional. She used to pull quite a bit, but now, she relaxes so nice I want to thank Vladimir and the owners for putting me on her. Today, she made the lead easy and then she did all the work." 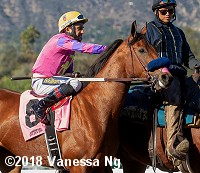 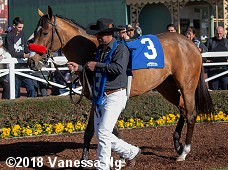