A crowd of 8,415 was on hand at overcast Belmont Park on Independence Day for two Grade 2 events both contested over the main track. The $200,000 Tom Fool Breeders' Cup Handicap (G2) features older horses sprinting 7 furlongs. Richmond Runner Stakes winner Commentator was sent off as the 1-2 favorite over 5-1 second choice Rondo from the powerful Godolphin Stable, winner of an optional claimer in his past start. Also in the field was 6-1 High Finance, also an optional claiming winner last out, but has been winless in stakes company.

Commentator broke alertly and battled on the front end with High Finance down the backstretch through a quarter in a brisk 22.07 seconds, with Rondo between them back in third. On the turn, Rondo poked his head in front of Commentator, while High Finance continued to pressure them from the inside. Entering the stretch, High Finance, taking advantage of his ground-saving trip, took over the lead at the 3/16 pole and drew away late to win by 2 3/4 lengths over late-running Awesome Twist in 1:21.81 over the fast track. It was another 1/2 a length back to Commentator, and 3 more back to Rondo in fourth, who tired in the stretch. 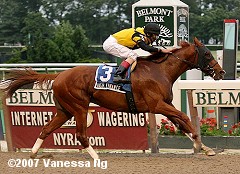 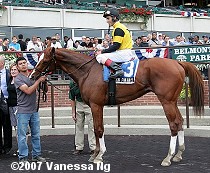 High Finance in the winner's circle. His trainer Rick Violette said, "Speed is great on this racetrack right now. The inside is terrific. Our plan was to break, go a few strides and see what was taking shape. When Rondo went up in there, Johnny was content to let them fight in front of us. It looked like he had horse all the way. He was settled; he had plenty of room inside. This horse has run two pretty hard races and he likes his races spaced. This is the first time he's run two really big races back to back.". Violette said High Finance would start next in the Forego at Saratoga. 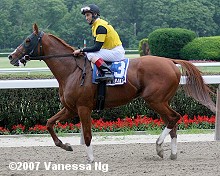 High Finance returns after the race. His jockey John Velazquez said, "We knew there was a lot of speed in the race. We wanted to be in the game. I was in a good position. Prado (Edgar Prado aboard Rondo) went with the other horse (Commentator), and I sat on my horse for a little bit. I sat there until the three-eighths pole, and then I started getting after them. He was there for me. I was pretty confident off the turn." 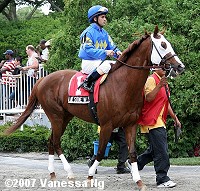 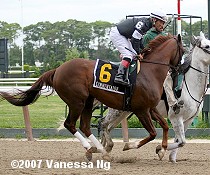 Right: Beaten favorite and third place finisher Commentator in the post parade. His trainer Nick Zito said, "If you look at 10,000 races, you'll never see that again. A :21 second quarter? Have you ever heard of that? At least go :44. I've never seen that as long as I've been coming to the track. The winner ran a great race. Once we cleared, I thought we would be okay. But the reason why we didn't stay clear is because they went the second quarter in :21. Hopefully, he'll come out all right. This was only his second race back. We'll see what happens." Jockey Corey Nakatani added, "The pace was pretty rapid. Our game plan never changed: we were going to the lead and try to kick clear. Unfortunately, the pace was too fast."

The second stakes race on July 4 was the $150,000 Dwyer Stakes (G2) for 3-year-olds going 1 1/16 miles on the main track. Holy Bull and Wood Memorial winner Nobiz Like Shobiz was sent off as the slight 7-5 favorite, making his first start since finishing tenth in the Kentucky Derby. In to challenge him was 8-5 second choice Any Given Saturday, the Tampa Bay Derby winner who was 8th in the Kentucky Derby in his last start. Peter Pan winner Sightseeing rounded out the top 3 on the board at 5-2.

23-1 outsider Believeinmenow quickly made the lead and set a pace of 23.87, 47.05, and 1:10.93 while being pressured by Any Given Saturday the whole way. Nobiz Like Shobiz stalked the pace in third out of trouble to the outside 2 lengths back from the pace. Entering the stretch, Believeinmenow tired and faded out of contention, allowing Any Given Saturday to inherit the lead. Any Given Saturday was 1 1/2 lengths clear of favorite Nobiz Like Shobiz with a furlong to go, and drew away late to win by 4 lengths at the line in 1:40.69. It was a long 5 lengths back to Sightseeing in third, who saved ground on the turn but showed no rally late. 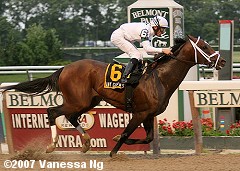 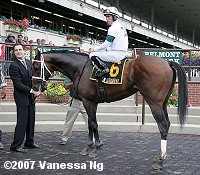 Any Given Saturday in the winner's circle. His trainer Todd Pletcher said, "It was a huge win. He came out of the Kentucky Derby with a pretty good foot bruise. It took us a while to get him over that. Then, it was a matter of picking out a game plan and put him in the best position going forward. We felt like the freshening from the Derby would be good for him, and obviously, it was. It's nice to have a horse that's tactical as this. When there is not a lot of pace, he can be right there. When there is a lot of pace, he can settle. That's what makes a horse like this a little extra dangerous. He can dictate the race and he doesn't need it to set up any particular way." Pletcher said he would start next in either the Haskell at Monmouth or the Jim Dandy at Saratoga. 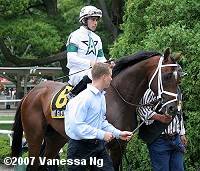 Any Given Saturday leaves the paddock before the race. His jockey Garrett Gomez said, "He's a very useful horse. He was there for me every step of the way. Today, he was like driving a car. I didn't expect to be in front of Nobiz Like Shobiz. When they took back, it left me in the driver's seat. I stayed out for a long time, wanting to make sure no one got to my outside. As the race progressed, I was liking my spot. The way my colt was traveling; it was unbelievable. We picked the tempo up at the half-mile pole. When we turned for home I said, `Let me lay him down.'" 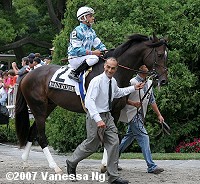 Second place finisher and beaten favorite Nobiz Like Shobiz leaves the paddock before the race. His trainer Barclay Tagg said, "I thought they would go a little faster early on. I thought he could win this race. It's hard to beat Pletcher; wherever you go, it's hard to beat him. No matter where you are, what race you're in or who the horses are, it's almost impossible to beat him. You guys will probably make a big deal out of (the front bandages), but I was worried about it raining and him skinning his heels if it came up muddy. I have no idea what (owner Elizabeth Valando) wants to do now. It looked like she was pretty disappointed." 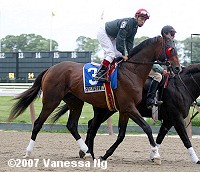 Third place finisher Sightseeing in the post parade. His trainer Shug McGaughey said, "I don't know if Edgar moved him in early or not. He had to check him once he got up to the leaders, and then he was kind of even from there. They ran fast. Always the two turns is what we've been pointing for. Backing up to a mile and a sixteenth today, I don't think, is his ballgame. But I needed to run him again, because he needs to learn to run." Jockey Edgar Prado added, "No one really wanted to go. He was a little eager the first part of the race. He gave me a little run at the end. It was just a little run."