The $350,000 Suburban Handicap (G2) features the top older handicap horses of the east going 1 1/8 miles around one turn of the Belmont Park main track, in an early prep for the Whitney Handicap (G1) and ultimately the Breeders' Cup Classic (G1). Just 5,047 fans come out under sunny skies and temperatures in the mid 90's. Flat Out was sent off as the even-money favorite in the short field of 5, third in the Metropolitan Handicap (G1) after winning the Westchester (G3) and winner of the 2011 Suburban Handicap. In to challenge him included 7-5 second choice Last Gunfighter, winner of 6 straight including the Pimlico Special (G3) last out, and 6-1 third choice Alpha, off his 5th place finish in the Godolphin Mile (G2).

7-1 fourth choice Percussion battled for the lead with Flat Out the length of the backstretch, setting fractions of 23.54, 47.22, and 1:11.14 while as many as 3 lengths clear of the rest of the field. Entering the stretch, Percussion tired to eventually finish last, allowing Flat Out to inherit the lead. He opened up a 2 length advantage midstretch through 1 mile in 1:34.93. Last Gunfighter, fourth early, put in a late rally to no avail as Flat Out cruised past the post 2 1/2 lengths in front in 1:46.87 over the fast main track. It was just a nose back to late-running 24-1 longest shot Fast Falcon third. 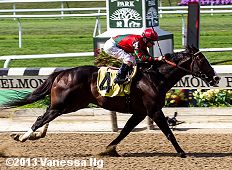 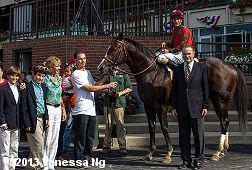 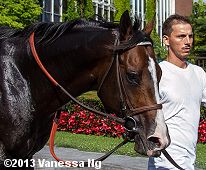 Left: Flat Out in the winner's circle with owner Art Preston at his side. Winning trainer Bill Mott said, "I was happy to see him break as well as he did, and then I thought, 'Maybe he broke too well.' You worry about him going head and head. But then, he eased off the other horse and had a nice trip down the backside. He looked like he did it the right way. He just eased back, and when (Junior) wanted him, it looked like he went right to the leader when he asked him."

Right: Flat Out heads back to the barn after the race. Mott added, "If he would be doing extremely well, I would say we might take a shot at the Whitney. I suppose that makes some sense, and then try to get him back here for the (Jockey Club) Gold Cup this fall. This obviously was an easier race than the last two. He ran hard today, but he ran real hard to win the Westchester and then he got jostled around a little bit in the Met Mile, which may have cost him something. It's nice to see him bounce back. I figured when he went by that horse on the lead, he was going to be tough to beat from there." 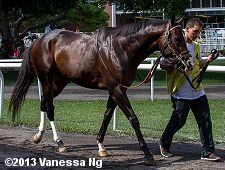 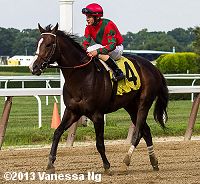 Left: Flat Out in the paddock before the race. Jockey Junior Alvarado said, "I didn't want to take the lead at that point, but he was dragging me the whole way. He was pretty much the best horse in the race. I wanted to break and put him in a good spot, clear on the outside. The pace wasn't too fast. The last two races they had been going :44, so he was a little sharp going :47. He was great. Turning for home, I asked him, and he gave it all to me." 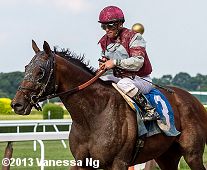 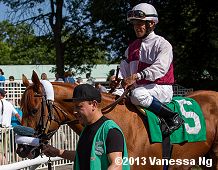 Left: Second place finisher Last Gunfighter returns after the race. Jockey Javier Castellano said, "Handicapping the race, I thought Alpha and Percussion would go to the lead, but Flat Out was much the best horse in the race. I give him all the credit, he was sharp today and he broke on top of the rest of the field. My goal was just to keep track of him – he was going to be my target to go forward to finish strong, and (Last Gunfighter) did. I think he ran second-best today, but he ran a huge race and beat some nice horses."

Right: Third place finisher Fast Falcon in the paddock. The 24-1 longest shot raced last 6 1/2 lengths off the pace under jockey Cornelio Velasquez, then rallied to get third beaten 2 1/2 lengths. The Nick Zito trainee improved his record to 1 win, 5 seconds, and 3 thirds in 15 starts, earning $310,017 for owner Richard Pell.

Immediately after the Suburban, a field of 6 three-year-olds went 1 1/16 miles on the main track in the $200,000 Dwyer Stakes (G2). Battier was sent off as the 3-2 favorite off his third place finish in the Gygistar Stakes. In to challenge him included 7-2 second choice Saint Vigeur, second in the Peter Pan (G2), and 4-1 third choice Abraham, fourth in both the Peter Pan and the Illinois Derby (G3).

Jockey Jose Ortiz sent 5-1 fourth choice Moreno to the lead exiting the chute and he set fractions of 24.21, 47.36, and 1:10.99 while about 2 lengths ahead of Battier stalking him in second. Entering the stretch, Battier tired badly and dropped to last, while Moreno began to pull away from the field. Moreno finished up under wraps 7 lengths in front of Saint Vigeur in 1:41.07. It was a neck back to 11-1 longest shot For Greater Glory third. 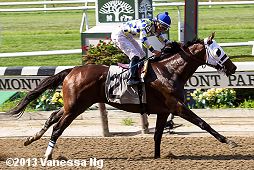 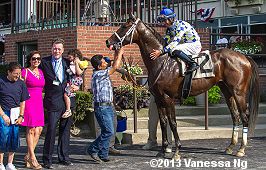 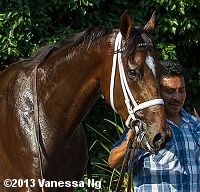 Left: Moreno in the winner's circle. John Daley, assistant to trainer Eric Guillot said, "This horse has done amazing since we have been here. He just really seems to have blossomed; all of his works have been fantastic. He's put on weight. With the way he ran in his maiden race, we figured that while we are here, why not take a shot? He's a beautiful mover and kind of floats across the ground. It seems like he is all lungs; he can run all day and can barely blow out a candle. We've been a little frustrated; we always knew there was a little more there. I'm just glad he showed his true colors today. He'll ship to Saratoga tomorrow morning, take a little break, and we'll see what's next."

Right: Moreno heads back to the barn after the race. Jockey Jose Ortiz, celebrating his first graded stakes win, said, "He won very good last time. I worked him twice and he worked pretty good. The trainer told me he came back very good, so I had plenty of confidence in my horse. Everyone wants to win a graded stakes. This is my first one and I hope it's not going to be my last." 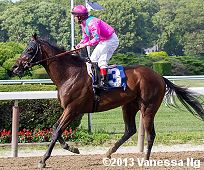 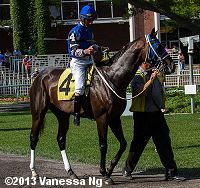 Right: Third place finisher For Greater Glory in the paddock before the race. The 11-1 longest shot was last 6 lengths off the pace early under jockey Robby Albarado, then rallied to get third beaten 7 1/4 lengths. The Steve Hobby trainee improved his record to 1 win, 3 seconds, and 3 thirds in 9 starts, earning $101,350 for owners Alex and JoAnn Lieblong. 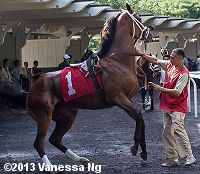 Sixth place finisher and beaten favorite Battier. The 3-2 favorite pressed the pace in second for the first 3/4 mile but tired at the 1/4 pole to finish last beaten 14 lengths. The Todd Pletcher trainee has a record of 4 wins, 2 seconds, and 1 third in 8 starts, earning $149,700 for owners Eclipse Thoroughbred Partners, Lady Sheila Stable, and Brahman Red LLC.