In the plans for many years, the new life size bronze statue of Secretariat now stands at the Kentucky Horse Park and was dedicated in a ceremony held April 8, 2006. The statue depicts Secretariat in the winner's circle after the Kentucky Derby with jockey Ron Turcotte up and being led by his groom Eddie Sweat. Artist Ed Bogucki, who also did the statue of John Henry and The Bart at Arlington Park, created the bronze using photographs and videos of the event to get the most realistic look possible. He started the smaller version of the bronze in 1989 shortly before Secretariat's death and so was able to use personal observations and measurments as well. After the small version was created, several years of fund raising were required to get the funds to complete the life size statue which now stands in a place of honor surrounded by inscribed pavers which display messages and tributes from Secrtariat's many fans. 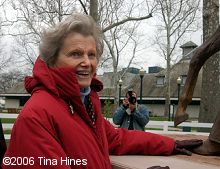 Secretariat's owner Penny Chenery next to the statue at the dedication. Even if you couldn't be there, you can still pick up some of the dedication ceremony merchandise over at Secretariat.com including the hat you see people wearing in the photos below. Of course they have lot of other stuff there as well as more information about Secretariat including his lifetime past performances. 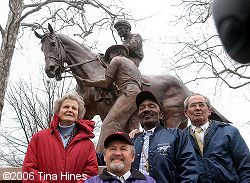 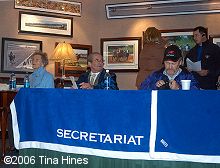 After the dedication, everyone went inside to sign autographs for the many fans in attendance. Here you see Penny Chenery, Jim Gaffney, and Ron Turcotte. 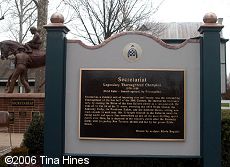 Here is the plaque in front of the statue. The inscription reads:

Secretariat, a chestnut colt of imposing size and beauty, was the outstanding Thoroughbred of the last half of the 20th Century. He showed his brilliance early by winning the Horse of the Year Eclipse award as a two-year-old. He went on to win 16 of his 21 starts, sweeping the 1973 Triple Crown: the Kentucky Derby, the Preakness Stakes, and the Belmont Stakes, setting new track records in each race. His 31-length triumph in the Belmont awed the racing world and sprorts fans everywhere as one of the most thrilling sports events ever. Here, he is depicted in the winner's circle after the Kentucky Derby with his jockey Ron Turcotee aboard and led by his groom Eddie Sweat.