The feature race on the first Saturday of the Del Mar summer meet was the $250,000 San Diego Handicap (G2) for older horses at 1 1/16 miles on the main track as the main local prep for the Pacific Classic. Conditions were excellent at the seaside oval with sunny skies and temperatures in the low 70's for the 11,765 fans in attendance. Californian Stakes (G2) Royal Ship was sent off as the 8-5 favorite in the field of 8 off his close second place finish in the Hollywood Gold Cup (G1). In to challenge him included 5-2 second choice Express Train, 3rd in both the Oaklawn Handicap (G2) and Hollywood Gold Cup, and 3-1 third choice Rushie, 4th in the Hollywood Gold Cup after finishing 2nd in the Oaklawn Mile.

Jockey Umberto Rispoli sent Rushie to the lead first time by and he set fractions of 22.97, 47.16, and 1:12.23 while pressed by Express Train and stalked by 12-1 Mo Mosa. Entering the stretch, jockey Juan Hernandez moved Express Train out wide and he swept to the lead through 1 mile in 1:37.20. 9-1 Tripoli put in a strong late rally from 6th but Express Train easily held him off to win by 1/2 a length in 1:43.37. It was another 3/4 length back to favorite Royal Ship third. 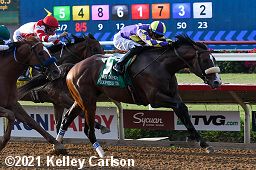 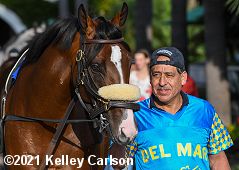 Left: Express Train in the winner's circle. Winning trainer John Shirreffs said, "I thought he was in a good spot the whole way, right off Rushie and then when he was asked in the stretch he responded well. The Pacific Classic, that would be the goal if everything works out."

Right: Express Train in the paddock before the race. Winning jockey Juan Hernandez said, "He broke real sharp today and that was the key. I stayed aggressive with him; he likes it and runs well when you do. We had a good spot until the quarter pole and then I really got after him. He was responding well and then those other horse came up on him and he dug in again. He's a tough one." 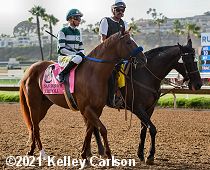 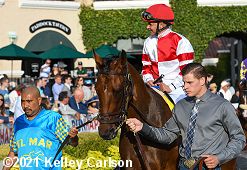 Right: Third place finisher and beaten favorite Royal Ship in the paddock before the race. The Richard Mandella trainee improved his record to 6 wins, 2 seconds, and 3 thirds in 14 starts, earning $293,305 for owners Fox Hill Farms and Siena Farm.


Immediately before the San Diego Handicap, the $80,000 Osunitas Stakes featured a field of 9 older fillies and mares going 1 mile over the Jimmy Durante Turf Course. Santa Barbara Stakes (G3) third place finisher Tapwater was sent off as the 5-2 favorite over 3-1 Brooke, 3rd in the Wilshire (G3), and 4-1 Sedamar, 9th in the Buena Vista (G2).

Ippodamia's Girl in the winner's circle. The Richard Baltas trainee improved her record to 5 wins, 2 seconds, and 2 thirds in 17 starts, earning $261,072 for owner-breeder George and Martha Schwary.