The feature race on Saturday at Del Mar was the $200,000 San Clemente Handicap (G2) for three-year-old fillies going 1 mile on the turf. Conditions were excellent at the seaside oval with partly cloudy skies and temperatures in the low 70's. Diversy Harbor was sent off as the 5-2 favorite in the field of 12 off her second place finish in the American Oaks (G1) after finishing third in the Honeymoon (G2). In to challenge her included 3-1 second choice My Conquestadory off her close second in the Selene (G3) at Woodbine, and 4-1 third choice Sandiva, fifth in the Coronation Stakes (G1) at Royal Ascot last out.

Jockey Rafael Bejarano sent 10-1 Istanford to the lead first time by and she set fractions of 23.13, 46.70, and 1:10.14 while as many as 2 lengths in front of 22-1 Miss Maciavelli and 9-1 Sheza Smoke Show. Entering the lane, Istanford continued to lead, getting 7/8 in 1:21.88. 18-1 Tepin, 7th early, came out for room and put in a strong rally but was much too late as Istanford cruised past the post 2 1/2 lengths in front in 1:33.83 over the firm course. It was another length back to My Conquestadory third, and 1/2 a length more to late-running favorite Diversy Harbor fourth. 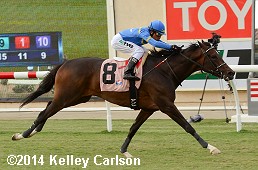 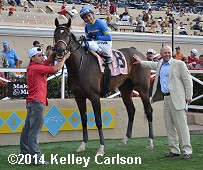 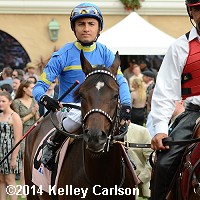 Left: Istanford in the winner's circle. Trainer Mike Stidham said, "With California speed we didn't know who would be sending and who wouldn't. I told Rafael (Bejarano) to break sharp and if you got the lead, fine, but if somebody else wants the lead let them have it. You saw what happened. Obviously, she loves this firm turf here. We'll see (what's next).We always nominate to a lot of stakes and we'll be looking around. But the way she ran on this turf course, (staying at Del Mar is) something to think about."

Right: Istanford in the paddock before the race. Winning jockey Rafael Bejarano said, "I knew there was other speed in the race and I wasn't expecting to be on the lead. But my filly broke so well and went right to the front and I just let her go. She was relaxed out there; she was running easy. That's why she had that nice kick at the end. She wasn't running that hard." 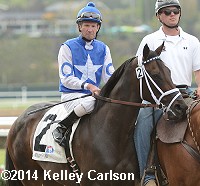 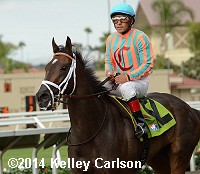 Left: Second place finisher Tepin in the post parade. Jockey Stewart Elliott said, "She ran a heckuva race. I asked her to go through (on the inside) and she went. When we went for home, I thought we had a chance there. But that winner just went and kept on going."

Right: Third place finisher My Conquestadory returns after the race. Jockey Victor Espinoza said, "I had a good trip. She was away just a little bit slow, but I got a good spot behind horses and she was fine with it. She ran well, especially when you consider it was her first time here. Watch out for her next time." 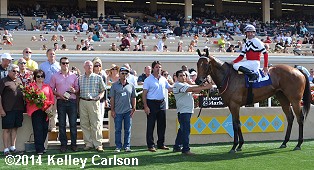 Cozze Up Lady in the winner's circle. The 11-1 shot tracked the pace under jockey Kent Desormeaux, took over at the 3/16 pole and held on to win. The Keith Desormeaux trainee improved her record to 7 wins, 2 seconds, and 2 thirds, earning $352,919 for owners Martin Racing, Morgan Thoroughbred, Westwind Property, and Farfellow Farms.