The Preakness card at Pimlico was a marathon of thirteen races, starting at an early time of 10:30am with the last race going off at 7:20pm. Besides the main event, seven other stakes were carded with several top rated horses competing.

Because of changes in the policy for photo access this year, I wasn't able to get many of the shots I normally include, especially for the turf races as we were not allowed over to photograph them. I am sorry about this and I hope things are better next year! What I can salvage of the undercard and other photos, I will get online Monday after I return back home. 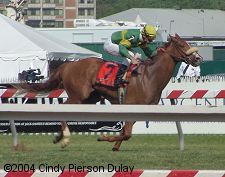 The Grade 2 Argent Dixie featured older horses going 1 1/8 miles on the turf course. 11-1 longshot Mr. O'Brien settled well off the pace early, as 36-1 longshot Wudantunoit set a brisk pace of 1:10.03 for three-quarters. Mr. O'Brien circled the field around the far turn, rallying well through the stretch to win by 2 lengths over 7-1 shot Millennium Dragon in a track record time of 1:46.34 over the firm turf. Canadian Triple Crown winner Wando faded to seventh after stalking the pace in second early, while 7-2 favorite Herculated finished tenth.
Results Chart from Equibase. 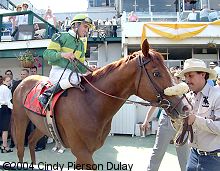 Mr. O'Brien and Ramon Dominguez enter the winner's circle. Winning trainer Robin Graham said, "We figured there was plenty of speed in the race. I told the jockey to just let him be wherever he wanted to be early. He relaxed the horse and just waited until the time was right, and the move was timed perfectly. This horse will go whenever you ask him." Jockey Ramon Dominguez said, "I wanted to make sure he relaxed, and he did. He started passing horses on the backstretch. I had to wait a little for some traffic on the turn. After that, he responded very well. He was willing to do anything I asked him to do. I was a little surprised we didn't have more company in the stretch." 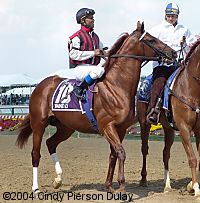 Canadian Horse of the Year and Triple Crown winner Wando in the post parade. He was in contention early but faded in the stretch to finish 7th. He is still a very gorgeous horse though. 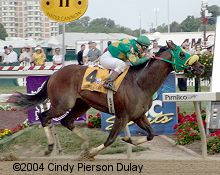 The Grade 3 Maryland Breeders' Cup Handicap featured older sprinters at six furlongs on the main track. 5-2 favorite Gators N Bears stalked the pace in fourth saving ground along the rail through the turn, then angled out at the top of the stretch and powered to the front, holding off the late charge of 15-1 shot Highway Prospector to win by 1 1/4 lengths in a time of 1:10.84. It was another 1 1/4 lengths back to 13-1 shot Sassy Hound in third, while 2-1 favorite Soaring Free was wide throughout and lacked any rally, fading to eighth.
Results Chart from Equibase. 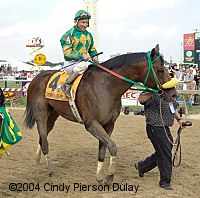 Gators N Bears and Chuck Lopez head for the winner's circle. Winning trainer Leo Nechamkin said, "He laid off the pace and it went just like I told the rider the race would go. The speed was not holding up. I told him a hole would open – go for it. And he did." Winning jockey Chuck Lopez said, "I had a good trip. I waited, got outside behind Jerry Bailey (Mt Carson) and when he went on, his horse left a little gap. I got inside and from there I had plenty of horse. When I called on him, he just took off." 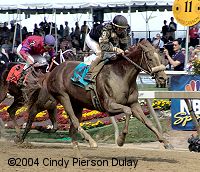 The $100,000 Sir Barton Stakes featured three-year-olds go 1 1/16 miles on the main track. Past runners have used this event as a prep for the Belmont Stakes, including 2002 winner Sarava. In this year's edition, 4-1 second choice Royal Assault saved ground in last place early on, then came on strong late to prevail by 1 3/4 lengths over 9-1 shot Dashboard Drummer, in 1:45.63. 9-10 favorite Preachinatthebar disappointed in fifth.
Results Chart from Equibase. 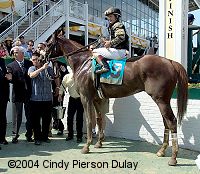 Royal Assault in the winner's circle. Winning jockey Pat Day said, "This was a really big effort today. We settled nicely down the backstretch, following horses into the far turn. As we turned for home, we found some room and the horse finished up strong." Trainer Nick Zito said, "The Sir Barton has produced a lot of good horses. Sarava won the Belmont a few years ago off this race. If you got the horse you can do it. And we needed a prep, two turns, and this worked out perfect. I'm very happy. I actually toyed with the idea of running this horse in the Preakness, but I said let's just keep gradually trying to develop these horses like we do." 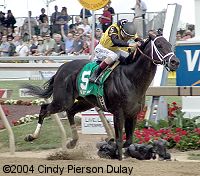 The Grade 3 William Donald Schaefer Handicap saw a field of eight older horses go 1 1/8 miles on the main track. 3-2 favorite Seattle Fitz stalked the pace in third early through six furlongs in 1:12.08, then drew clear with a furlong to go, winning by 1 1/2 lengths over 2-1 second choice The Lady's Groom in 1:49.43. It was 5 1/4 lengths back to 4-1 third choice Roaring Fever. Art Magnuson, assistant to winning trainer Kiaran McLaughlin, said, "He had a clean trip. He's shown he can run with Medaglia d'Oro types, so the Whitney seems likely." Jockey Richard Migliore said, "I just tried to give him as smooth a trip as possible. The race really set up for him perfectly. He likes to be in a position where you don't have to get after him too much. When you drop the lines and get him into a comfortable rhythm he's a much better horse. He was much the best today.
Results Chart from Equibase. 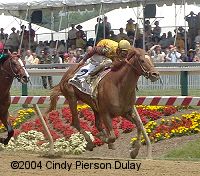 The $100,000 Hirsch Jacobs Stakes featured three-year-olds sprinting six furlongs on the main track. 5-1 fourth choice Abbondanza rallied from seventh early to just catch 6-1 shot Bwana Charlie by a head in a time of 1:10.72 over the fast surface. It was 3/4 length back to Penn Pacific in third. 9-5 favorite Teton Forest stalked the pace early but had no rally, finishing fourth. Winning jockey Ramon Dominguez said, "(Trainer) Tim (Tullock) and I talked before the race about trying something different this day. We kind of figured they'd battle it out early. We stayed back. There wasn't much room when we made our move. We squeezed through there. He was very, very game." Shane Sellers aboard Bwana Charlie said, "He had a real good run. I got right up to him (the winner), maybe put a neck in front, but he came back and got me because he probably got a better trip on the inside."
Results Chart from Equibase. 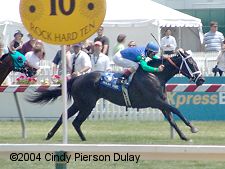 The Grade 3 Gallorette featured older fillies and mares going 1 1/16 miles on the turf. 11-10 favorite Ocean Drive lived up to expectation, as she stalked the early pace of 20-1 shot Lavender Baby through six furlongs in 1:11.70, then easily powered to the front at the top of the lane, extending her lead to three lengths at the 1/8 pole, and then easily holding off the late run of 2-1 second choice Film Maker to win by 1/2 a length in 1:40.85 over the firm course. It was 3 1/2 lengths back to 13-1 shot With Patience in third. Winning jockey Jerry Bailey said, "There as no speed in this race on paper so we wanted to stay close up and we were able to. My horse ran a good race and this is a really, really fast race today." Tristan Barry, assistant to trainer Todd Pletcher, said, "She ran the race of her life last time out, but racing luck was not on her side. She stepped up again today with a really super effort. Her drive through the stretch was powerful indeed. Mr. Bailey knew when to push her buttons."
Results Chart from Equibase. 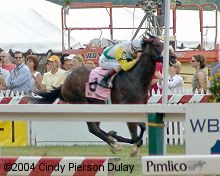 The $100,000 Woodlawn Stakes featured three-year-olds going 1 1/16 miles on the turf. 3-1 second choice Artie Schiller stalked the pace in sixth early, then took command inside the last furlong, drawing away to win by 3 3/4 lengths over 8-1 shot Lipan in 1:41.86. It was a neck back to 8-5 favorite Timo in third. Winning trainer James Jerkens said, "I was really glad to see the ground-saving trip we got. When you are able to tuck in like that you save your horse so much. This horse was skinny last winter, but the allowance win signaled he was back. It's always nice to see them explode in the stretch." Edgar Prado, aboard beaten favorite Timo, said, "The horse was very anxious today. When I asked him for run down the lane, he shut down a little. It was tough today to make up ground and get to the winner."
Results Chart from Equibase.