It was a lot more lively on the backside today as most of the competitors were on the grounds and several went out to stretch their legs. It was very sunny and hot at Pimlico and the same is expected the rest of the week, so if you are coming bring your sunscreen! Later in the morning was the traditional Alibi Breakfast for the connections of the Preakness horses and the media. More from it later. 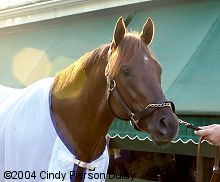 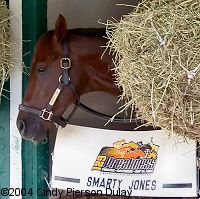 Morning line favorite Smarty Jones jogged a mile on the main track on Thursday morning the looked to be falling asleep in his stall. Trainer John Servis said, "He went to the track with his buddy (a pony) and had a fine time. I think this (Preakness) could be his toughest race. He has been campaigning hard and coming back in two weeks. If we can get through this we could have a good chance at a Triple Crown, but right now we have to take this one day and one race at a time." 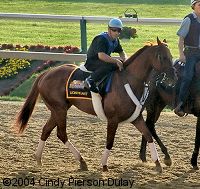 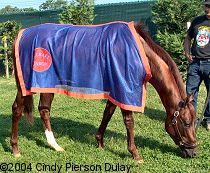 Lion Heart took an extended walk around the shedrow and then went for a mile and a half gallop on the main track with a pony. Trainer Patrick Biancone said, "He was very relaxed, he did good." Asked how his horse is enjoying the accommodations, "Lion Heart's stall is like a five star hotel." 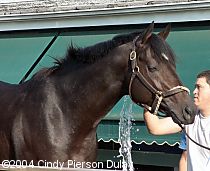 Trainer Nick Zito remained on the fence as to whether The Cliff's Edge would run on Saturday. "We have to wait for the abscess to pop. If it pops today, and the vet can treat the foot, he'll stay in. If not, I'll scratch him Friday. It's got to be 100 percent all right. We'll do what's right for the horse. We just want to get him back okay." The horse was very visibly limping on that foot this morning. 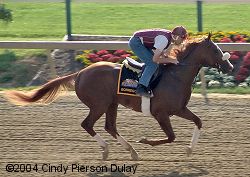 Sir Shackleton went out for a gallop with exercise rider Carlos Correa aboard. Trainer Nick Zito said, "He's doing well. He's an improving horse and we'll find out what we have in the Preakness." 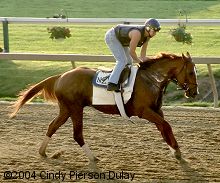 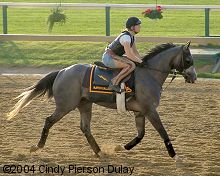 Imperialism went for a mile and a half gallop on the main track with trainer Kristin Mulhall aboard. Mulhall said afterward, "He did fine." Owner Steve Taub added, "I don't think the change to California made the difference weather-wise. I think it's the attention and love he has gotten from his trainer." 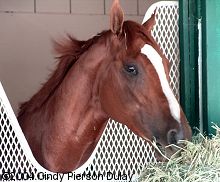 Eddington, who missed the Derby due to lack of graded earnings, was settled into his stall in the Pimlico stakes barn and was enjoying some hay. 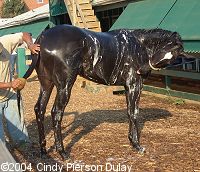 Nick Zito's filly Preach It, who will run in the Miss Preakness on Friday, seemed to enjoy licking the soap off herself during her bath.