Lost in the Fog euthanized due to cancer

Update: Sunday September 17 Lost in the Fog was euthanized after an attempt at chemotherapy for his cancer failed to give any positive results. "We accomplished what we wanted to do," said trainer Greg Gilchrist Sept. 18. "It was all about giving him quality (time). We did everything we could for him. He was happy and content right up to the end. He went quietly and easily." Gilchrist had been grazing him earlier in the day and was heading to the paddock to saddle a horse when Lost in the Fog went into distress.

"As much as he accomplished, we'll never know how good he really was," Gilchrist said. "What a warrior, to win a graded stakes race three months before he was put down. He never let us down, and we didn't ever want to let him down."

After 2005 champion sprinter Lost in the Fog showed lackluster performances in every start so far this year, including a ninth place finish in the Smile Sprint (G2) at Calder in his final start, trainer Greg Gilchrist sent him to the University of California at Davis, expecting a diagnosis of colic, and plans had been made with owner Harry Aleo to announce the colt's retirement on Monday because his quarter crack was not healing fast enough for him to run in the Breeders' Cup Sprint at Churchill Downs.

Unfortunately, veterinarians found out in a sonogram a cancerous tumor the size of a football covering his spleen. At the time, owner Harry Aleo called it a "Barbaro situation", clearly life-threatening but efforts would be made to save him if possible. Aleo's worst fears were realized on Friday when further laparoscopic examination revealed two more tumors. One was as large as the first one, beneath his spine along the back, and the other, much smaller, was in the membrane that suspends the spleen. Gilchrist said, "We went in and did a little camera search looking for more cancer outside the spleen (Friday)," Gilchrist told TVG. "He has two or three more tumors in there in bad places. They're inoperable. I'm sorry to say it's just the bottom of the ninth for Lost in the Fog. There are no choices as far as him going on. His life is pretty much over. The horse is not in excruciating pain. He's not writhing or having a terrible time. But, the best you can put it is he's just uncomfortable. Not all of the time, but some of the time he seems to have these little bouts."

Veterinarian Dr. Don Smith said that the tumor under the spine is "very intimately against the body wall. It could not be removed surgically. We had hoped we weren't going to see anything inside there except for what was in the spleen. But you could see the mass in front of you and it was very high right along the backbone. As soon as the scope went in there, you saw it and everyone knew what the implications were." Smith pointed out that the tumors have been developing for between 4 months to a year, and that cancer in horses is very rare, accounting for only 0.2% of equine deaths, and is as common in young horses as in older horses. "We're keeping him on a minimal level of pain killer. If that's not working then we'll have to reach a decision." Gilchrist said of the effects the tumors had on his last few races, it definitely wasn't helping him. What a warrior; I've never had a horse that comes close to this one." Lost in the Fog has responded well to painkillers and could survive more than a month, but he is not expected to last more than 2 weeks. When Lost in the Fog came out of anesthesia, Gilchrist said, "His head was down, I patted him, and he picked his head up. It's pretty somber here. He's like a member of the family. It will be quiet here for a while, but we'll make it through."

Gilchrist said he would bring Lost in the Fog home to Golden Gate Fields on Saturday, so that he would be in comfortable, familiar surroundings. "We'll keep him in the stall for a week or 10 days. This would be the best thing to do, get him back with his groom. I just couldn't leave him up there to be euthanized and thrown in the bone yard. We're fine with a week, 10 days, maybe two weeks. But you get beyond that, his quality of life wouldn't be good. This way we'll let the people who have always been around him take care of him. We'll bring him home and make him as happy as we can for awhile. We won't take it too far. " In a tribute to Lost in the Fog's owner Harry Aleo, Gilchrist said, "Harry's a tough guy. He's been through a lot. But with an animal, it's sometimes tougher than with humans. I gotta tell you, I've got more respect for this horse than I have for 75% of the people I deal with." Lost in the Fog's remains will be cremated and interred on the farm in Florida where he grew up.

The popular colt captured the racing public's imagination when he started his career with 10 straight victories, shipping around the country from his Golden Gate Fields base. He set track records at Turf Paradise and Golden Gate, and won the Sunshine Millions Dash, the Swale (G2), the Bay Shore (G3), the Rive Ridge (G2), the Carry Back (G2), and the King's Bishop (G1), before finishing seventh in the Breeders' Cup Sprint (G1). Despite that loss to Silver Train, he won the Eclipse Award for Champion Sprinter of 2005. Owner Harry Aleo said when accepting the trophy, "Secretariat lost a few races; Man o' War lost, too. So, Lost in the Fog's 10 for 11; that's not too bad. With a little bit of racing luck, we'll be right back here next year. We have our eyes on the Breeders' Cup next year."

Despite original reports that there was no hope for him, Dr. Gary Magdesian, chief of equine medicine at University of California at Davis, treated Lost in the Fog with Dexamethasone, a corticosteroid sometimes used in treating lymphoma. It was hoped this would make the tumors shrink to the point they could be treated with surgery or chemotherapy, but unfortunately it had no effect. They did try chemo anyway, but he only got one treatment before having to be put down.

Here is a selection of photos of Lost in the Fog from the several times we got to see him. 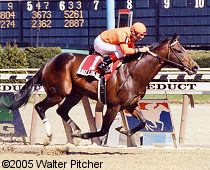 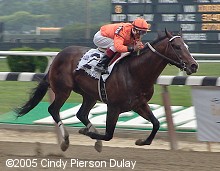 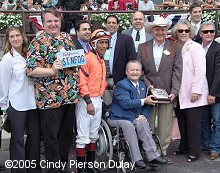 Winning the 2005 Riva Ridge Breeders' Cup Stakes on the Belmont Stakes and all his happy connections in the winner's circle. 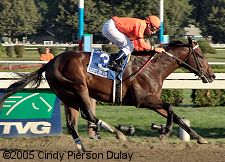 Winning the 2005 King's Bishop on the Travers undercard at Saratoga 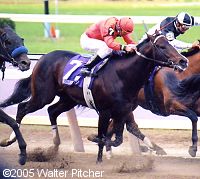 Running the 2005 TVG Breeders' Cup Sprint. He finished seventh and this was his first loss as he came into the race undefeated in 10 starts. 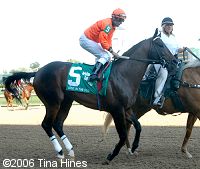 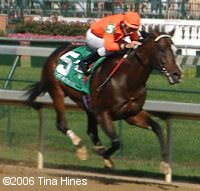 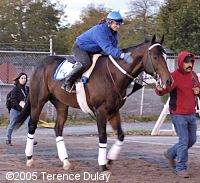 Some photos from the 2005 Breeders' Cup morning workouts at Belmont Park. 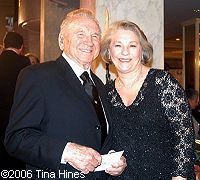 His owners Mr. and Mrs. Harry Aleo at the reception before the 2005 Eclipse Awards ceremony.