The feature race on Saturday at Del Mar was the $150,000 La Jolla Handicap (G2) for 3-year-olds going 1 1/16 miles over the Jimmy Durante turf course. The 25,769 fans on hand enjoyed a typical Del Mar afternoon of sunny skies and temperatures in the upper 60's. Freakin Rocket was sent off as the 5-2 favorite in the field of 9, winner of his first two starts before finishing third in the first division of the Oceanside last out. In to challenge him included 7-2 second choice Greeley Awesome, second in the Oceanside ahead of Freakin Rocket, and 6-1 third choice Rosengold, fourth in the second Oceanside division after winning the Tsunami Slew at Hollywood.

Jockey Martin Garcia sent Rosengold to the lead immediately and he set a brisk pace of 22.99, 45.81, and 1:09.58 while as many as 4 lengths clear of 8-1 Den's Legacy second, in turn 2 length in front of Freakin Rocket third. Entering the stretch, Rosengold tired badly, fading to eventually finish last, allowing Den's Legacy to inherit the lead through 1 mile in 1:34.07. 9-1 Dice Flavor, 8th early, came out wide into the stretch and unleashed a strong rally to get up by 1/2 a length in 1:39.82 over the firm course, just 3/100 second off Sidney's Candy's 2010 course record. It was just a neck back to 17-2 Pure Loyalty third. Favorite Freakin Rocket also tired in the stretch finishing seventh. 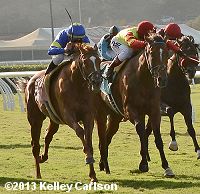 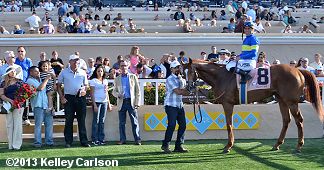 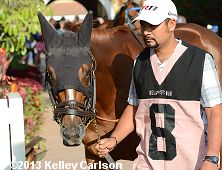 Left: Dice Flavor in the winner's circle. Winning jockey Garrett Gomez said, "Paddy (Gallagher) only told me about his (tender) mouth. Then he wished me good luck. The trip was good. I was a little wide coming out of the chute, but the rest was good. I was saving ground. I wanted to come out with him at the 5/16, but I had to wait. I knew he had that good late turn of foot, so it was OK. Then when we got out he quickened. This is special; it eases some of the pain (of his recent bout with alcohol problems that caused him to miss the beginning of the meeting; he last rode on July 14). I'm so happy to be back. You don’t think about coming back in a graded stakes. You just want to end up in the winner’s circle. And I'm so glad the fans were so supportive. This is a very special moment."

Right: Dice Flavor in the paddock before the race. Winning trainer Paddy Gallagher said, "He worked well on the grass here, seemed like better each time. The race set up nice for him and Garrett (Gomez) did a good job riding him. He's run on the turf and synthetic and when he gets a pace to run at he usually shows up. I'm glad he showed up today." He may go next in the Del Mar Derby on September 1. 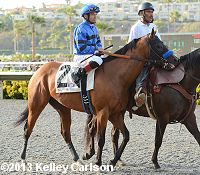 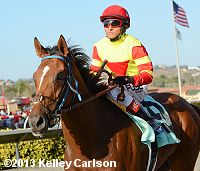 Left: Second place finisher Den's Legacy in the post parade. Jockey Corey Nakatani said, "He ran a terrific race. I knew they were going fast, but we wanted to put him in the race and that's what we did. He responded well; did everything right. Just didn't get that bob at the end. That's OK." Den's Legacy will also go next in the Del Mar Derby.

Right: Third place finisher Pure Loyalty returns after the race. Jockey Rafael Bejarano said, "Good trip for me. He ran hard. The winner came outside me and he was best today." 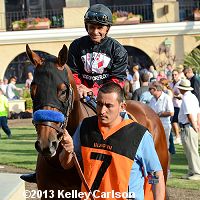 Seventh place finisher and beaten favorite Freakin Rocket in the paddock. The 5-2 choice settled in third as many as 6 lengths off the pace under jockey Mike Smith, inherited second at the 1/8 pole but tired late to finish seventh beaten 3 lengths. The Tim Yakteen trainee improved his record to 2 wins, 0 seconds, and 1 third in 4 starts, earning $65,878 for owner-breeder Mercedes Stables.