The first Saturday of "Belmont at the Big A" saw conclusion of NYRA's 2022 Turf Triple Series. Due to construction of pedestrian and vehicular tunnels to the infield at Belmont Park, the traditional Fall Championship Meeting was moved to Aqueduct, with racing to return to Belmont in the spring in time for the Belmont Stakes. Conditions were excellent on Long Island for mid September, with partly cloudy skies, temperatures in the low 70's, the main track fast and both turf courses firm.

The feature race was the $1 million Caesars Jockey Club Derby Invitational (G3) featuring three-year-olds going 1 1/2 miles around 3 turns of the inner turf course. Just six made final entry with Nations Pride sent off as the 1-2 favorite off his Saratoga Derby (G1) win after finishing second in the Belmont Derby (G1). In to challenge him included 11-4 second choice Classic Causeway, winner of the Belmont Derby but third in the Saratoga Derby, and 11-2 third choice Ardakan, winner of the Premio Derby Italiano (G2) at Capannelle before finishing 8th in the Deutches (German) Derby (G1) at Hamburg and third in the Grosser Preis von Berlin (G1) at Hoppegarten.

Jockey Flavien Prat sent Classic Causeway to the lead around all three turns through fractions of 23.80, 48.33, 1:12.55, 1:37.02, and 2:00.96 while pressed by 49-1 longest shot Daunt and stalked by Nations Pride. Turning for home, jockey Frankie Dettori moved Nations Pride 4 wide and he swept to the lead, drawing off through the stretch to win by 6 1/4 lengths over late-running 12-1 The Grey Wizard in a new course record time of 2:24.14, 2.86 seconds faster than the previous record set by Pebbles in the 1985 Breeders' Cup Turf. It was another 1/2 length back to pacesetter Classic Causeway third. 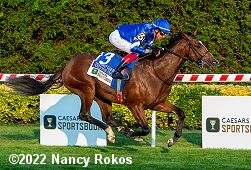 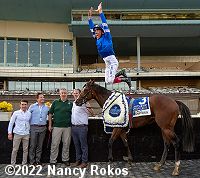 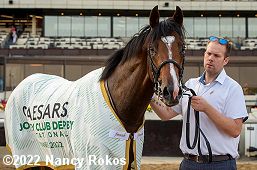 Left: Winning jockey Frankie Dettori takes his flying leap off Nations Pride in the winner's circle. Dettori said,  "He settled in at Saratoga and strengthened up. Obviously, being here, he's adapted to the tracks and it was an easy job for me. He broke well and I didn't want to let [Classic Causeway] have it easy in front. When the outside horse [Daunt] took him on, it was great. It saved me doing the job. From then on, it was just saving ground and getting him to turn properly and heading into the straight, he was never in doubt. At the corner I knew I had the race won. I knew that and I still hadn't gone for the gears yet. Everyone was cooked.” 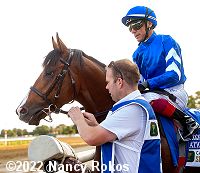 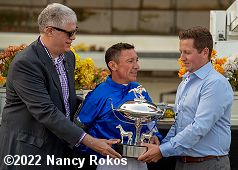 Left: Nations Pride heads out to the track before the race. Chris Connett, assistant to winning trainer Charlie Appleby said, "He jumped nicely with them today. He travelled around and got a lovely tow into the race. He quickened up how you would really like him to. He put them to bed pretty quickly. Frankie gave him an absolute peach of a ride. He travelled around and picked up just how you would like. It was fairly straightforward for a race like this. He's got that turn of foot. Since his first run here, he's really grown and filled out that frame of his. He's done fantastic since he's been here. It's nice to see. This fella has put a proposition into Charlie's head anyway (to possibly run in the Breeders' Cup Turf). We travel home on Tuesday and we'll let the dust settle, see how he comes out of it and make plans from there.” 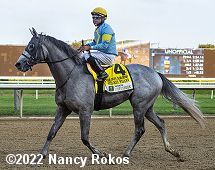 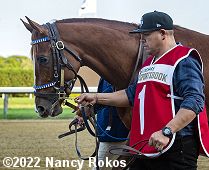 Left: Second place finisher The Grey Wizard returns after the race. Jockey Luis Saez said, "He ran big. He broke from there and I was following the winner. At the half-mile, the winner kept going but this one never gave up. He tried pretty hard to get second. It was a good race.

Right: Third place finisher Classic Causeway walks over before the race. Jockey Flavien Prat said, "He broke well and got to the lead. It was probably a bit too far, especially today with the fair pace. He ran well.”


The $700,000 Jockey Club Oaks Invitational (G3) featured 6 three-year-old fillies going 1 3/8 miles over the inner turf for the third leg of the Turf Tiara series. Belmont Oaks (G1) winner McKulick was sent off as the 4-5 favorite off her second place finish in the Saratoga Oaks (G3). In to challenge her included 5-2 second choice Toskana Belle, winner of the Preis der Diana (German Oaks, G1) at Düsseldorf and 4-1 third choice Beside Herself, third in the Regret (G3) at Churchill before winning an allowance at Saratoga last out. 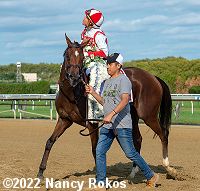 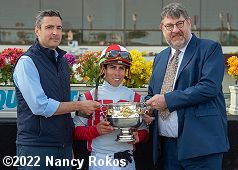 Left: McKulick heads to the winner's circle. Winning trainer Chad Brown said, "She's named after my late bookkeeper and friend, Mary, my first employee. So, it's special that the filly is having a great year. Irad rode a great race. It lined up perfect for him. He was tracking the eventual runner-up [Toskana Belle] the whole way. It was a beautiful trip. I thought maybe he was moving a little early, but he knew what he was doing. He timed it right. I'm so proud of him. He's really come through for us every race and ridden her great."

Right: The trophy presentation for the Jockey Club Oaks Invitational. Winning jockey Irad Ortiz Jr. said,  "I moved a little earlier because she's that kind of filly that needs to start going a little earlier. I let her go and do her thing a little earlier than usual and she got the job done. After we made the lead, I think she spooked a little bit. She saw something maybe inside the field, because she went out a little bit. I was able to correct her right away. I switched my stick and she responded really well. She ran last time at 1 3/16, and the pace was very slow and I fought her the whole time and she still gave me something at the end. I was pretty confident going into today. I knew as long as I could get her to relax, she was going to have some horse in the end. I never fought with her the whole race.” 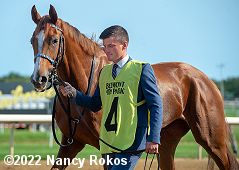 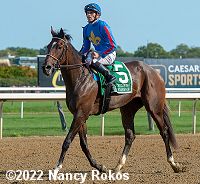 Left: Second place finisher Toskana Belle walks over before the race. Jockey Frankie Dettori said, "On the inner track, the turns are so tight she found it very difficult to negotiate them. I lost a lot of momentum on the turns and then she did her best work on the straight. The damage was done around the turns.” Trainer Andreas Wohler added, "She ran a great race. We'll see how she comes back. Maybe, we'll come back [for the Breeders' Cup].”

Right: Third place finisher Miss Yearwood returns after the race. Jockey Chris Landeros said, "She ran good. I didn't realize how tight the turns were here, I hadn't been here in a little while. Going around the first turn, I lost a little ground because it was all a little new to her and myself. When I asked her to settle, she did. When I asked her to run, she really did. It was a good run today. She's still getting it. Pace could help her. She seems to be a horse that's going to have a good turn of foot the last three-eighths, so pace in front will definitely help her.” 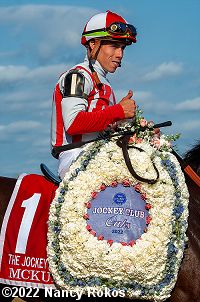 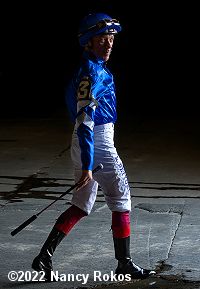