The first Saturday of the Belmont Park Fall Championship Meeting saw conclusion of NYRA's 2021 Turf Triple Series. Conditions were excellent on Long Island for mid September, with sunny skies, temperatures in the mid 80's, the main track fast and both turf courses firm. The feature race was the $1 million Jockey Club Derby Invitational featuring three-year-olds going 1 1/2 miles around 2 turns of the Widener turf course. New for 2021, the race is a Breeders' Cup Challenge event in the Turf division. Belmont Derby Invitational (G1) winner Bolshoi Ballet was sent off as the 2-1 favorite in the field of 7 off his 4th place finish in the Saratoga Derby Invitational (G1). In to challenge him included 9-4 second choice Soldier Rising, 2nd in the Prix de l'Avre at Longchamp and the Saratoga Derby, and 5-2 third choice Yibir, winner of the Bahrain Trophy (G3) and Newmarket and the Great Voltigeur (G2) at York. 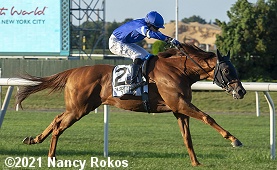 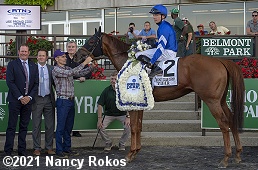 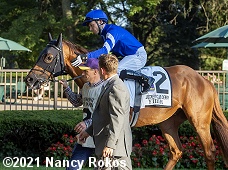 Left: Yibir in the winner's circle. Chris Connett, assistant to winning trainer Charlie Appleby said, "The ground wasn't so much of a problem. He can be a bit of a quirky character, so it was more of a matter of if he kept his head right. When they jumped out and wasn't really going a lick, I thought 'Oh, he's never done that before,', but Jamie gave him a great ride and coaxed him into it. Once he started to roll, he's got some engine on him."

Right: Yibir in the paddock before the race. Winning jockey Jamie Spencer said, "I was confident going in. He ran a good race and fared well in the stretch. I'm happy with his performance today. He's a nice horse and it was a good trip." 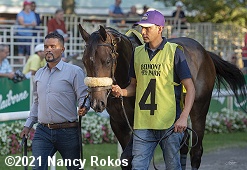 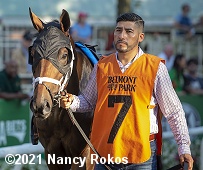 Left: Second place finisher Soldier Rising in the paddock before the race. Jockey Irad Ortiz Jr. said, "He ran well, he just got beat by a good horse. I got a good position. I can't complain. I wish I could get out earlier than the quarter pole. He takes some time to get going. When I finally got out of there in the clear, [Yibir] was full of run already. When he hit the clear, he started getting there. He took a couple of strides and he kicked on. No excuses, he was just second best. He's a nice horse."

Right: Third place finisher Slicked Back in the paddock. Jockey Luis Saez said, "I'm happy with his performance. He ran well. I was very comfortable out there with him."

Jockey Jose Ortiz sent Higher Truth to the lead first time by through easy fractions of 25.51, 51.70, 1:18.12, and 1:43.38 while pressed by 9-2 fourth choice Shantisara and stalked by 7-1 fifth choice Baby Blythe. Turning for home, jockey Flavien Prat sent Shantisara to challenge for the lead and she took over inside the 1/8 pole through 10f in 2:06.09. Kept to task by Prat, Shantisara outfinished Higher Truth to win by 1/2 a length in 2:16.91. It was another 2 lengths back to late-running Harajuku third. 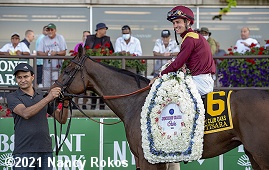 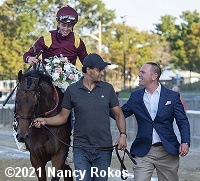 Left: Shantisara in the winner's circle. Winning trainer Chad Brown said, "She had stayed 1 1/4 before we bought her, albeit against lesser company over [in France] and did it well. I was confident that she would handle the distance. In these races, it's just a matter of if you're good enough. When you have these horses from Europe come in with top trainers, I don't know what they're going to do. I'm guessing they're well-meant and scary. The only thing you can do is control the horses you have. The pace favored us today, and it doesn't always go that way."

Right: Shantisara heads to the winner's circle with trainer Chad Brown far right. Winning jockey Flavien Prat said, "She was super relaxed. I thought it was a great run. I was very confident going into the race. Obviously, it was a step forward for the distance. She broke well and got herself into the race. She took a nice breather around the turn, and when I asked to move, she came through." 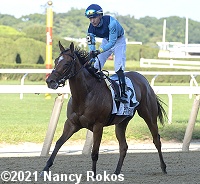 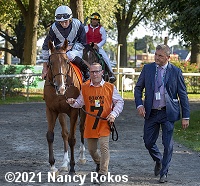 Left: Second place finisher Higher Truth returns after the race. Jockey Jose Ortiz said, "I'm happy with how it went. She ran well. It was a good ride." Trainer Chad Brown added, "Higher Truth ran her heart out on the lead. Jose gave her another great ride. She's the only filly that ran in all three legs of the Turf Triple and ran great in all three legs to show her constitution. Jose gave three masterful rides and she came up just a little bit short each time."

Kicking off the Saturday stakes trio was the $300,000 Grand Prix American Jockey Club Invitational Stakes for older horses going 1 5/8 miles on the main track. Lone Rock was sent off as the 1-10 favorite in the short field of just 5 off a 4 race win streak including the Isaac Murphy Marathon, Brooklyn (G2), and Birdstone Stakes. In to challenge him included 13-2 second choice Empty Tomb, 3rd in an allowance after finishing last of 9 in the Stephen Foster (G2), and 10-1 third choice Chris and Dave, 3rd in an allowance last out. 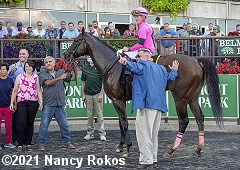 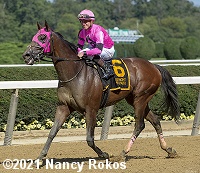 Left: Locally Owned in the winner's circle. Winning owner Jay Provenzano said, "Dylan rode the perfect race. He saved every inch of ground here. It's amazing that this horse, another claim, comes back and wins a race like this. This is what I dream of and it's all unfolding finally. If you look at his form, he runs a good race, then runs a clunker, runs a good race, then runs another clunker. He ran a clunker last time, but he ran a good race today."

Right: Locally Owned returns after the race. Winning jockey Dylan Davis said, "It was exactly what I planned. I wanted my horse to relax at the first turn. I was very happy with my position. It was an opportunity to me to come up the rail. I just wanted to make sure he was performing, and the timing was right. I took that position because I didn't want Lone Rock to get the jump early before I did. I wanted to get the jump first. I took the initiative, and [Locally Owned] took control. He really finished strong at the wire. He really wanted to be there first. I was very confident the whole way, I was just riding with him. He did it but that was the way we needed to [make it happen]." 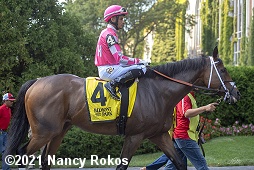 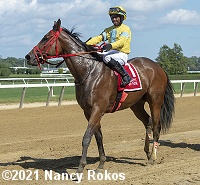 Left: Second place finisher and beaten favorite Lone Rock heads out of the paddock before the race. Jockey Ramon Vazquez said, "I had a good trip. I don't know what happened, but he didn't respond to me today like he usually does. He never picked up the bridle."