Sunday at Saratoga officially drew one of the largest crowds of the meet, announced as 65,598, but this was artificially inflated by the "turnstile spinners" looking to stock up on the giveaway T-shirts. Those that did stay for the races were treated to one of the longest races of the meet, as a field of 8 older horses traveled 1 5/8 miles over the Mellon Turf Course in the $80,000 John's Call Stakes, restricted to non-winners of a graded stakes this year. Just As Well, third in an optional claimer last time out, was sent off as the 2-1 lukewarm choice in his stakes debut over 3-1 second choice Summer Patriot, an allowance winner in his last start and also making his first start in stakes company. 5-1 Biggerbadderbetter, fourth behind Just As Well in his last start and winless since April, completed the top three on the toteboard.

Biggerbadderbetter opened up a 1 1/2 length lead down the backstretch the first time, getting the initial quarter in 25.69, before 6-1 Crown Point moved up to set the pace first time past the grandstand, getting the half in 51.48 over the good turf course. Favorite Just As Well, saving ground the whole way, moved up to take the lead on the clubhouse turn, battling on the pace with Biggerbadderbetter and Crown Point through 3/4 in 1:17.01 and 1 mile in 1:41.76. Turning for home, Just As Well tired badly to eventually finish last. Summer Patriot, who had raced at the back of the field for the first 6 furlongs, gradually made headway down the backstretch the second time and took over the lead inside the 1/4 pole. Summer Patriot drew away from the tiring pacesetters through the stretch, cruising under the line 7 3/4 lengths in front of late-running 11-2 fourth choice Taconeo in a time of 2:42.50. It was another 2 lengths back to 9-1 Codeword third. 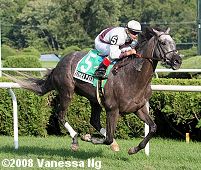 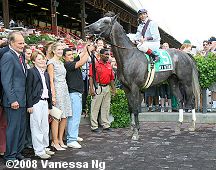 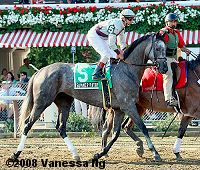 Left: Summer Patriot in the winner's circle with trainer Barclay Tagg on the far left. Tagg said, "It sounds like hindsight but I had no doubts that he should win the race. Anything can happen and you can be wrong very easily, but I felt that he would win the race and win it like that. I would have been happy with a nose, but I was very happy that he did it so easily." Tagg will enter him next in the Joe Hirsch Turf Classic at Belmont on September 27.

Right: Summer Patriot in the post parade. Winning jockey Eibar Coa said, "I wasn't pushing at all, I just let him be. He's got such a beautiful stride and the distance he just takes it so well he just went by every horse by the 1/4 pole. It's not that I planned to go by them at that point, but he was just that much the best today." 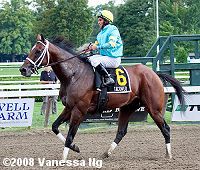 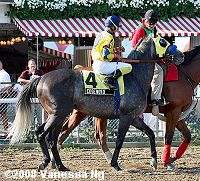 Left: Second place finisher Taconeo returns after the race. The 11-2 fourth choice was under a firm hold by jockey Alan Garcia for the first mile while back in fifth, then came out four wide for the drive, closing well to get second. The Kiaran McLaughlin trainee improved his record to 12 wins, 3 seconds, and 2 thirds in 19 starts, earning $511,541 for owner Paula C Racing Stable.

Right: Third place finisher Codeword heads out for the post parade. The 2-1 favorite took over the lead 7 furlongs into the race after stalking the early pacesetters under jockey John Velazquez, continued to lead on the far turn but tired badly approaching the 1/4 pole. The son of A.P. Indy has a record of 2 wins, 1 second, and 2 thirds in 8 starts, earning $81,366 for owner-trainer Jonathan Sheppard. 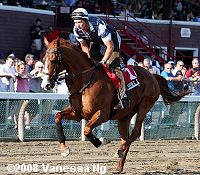 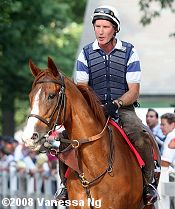 The race is named for John's Call who won the 2000 Sword Dancer as a 9-year-old. That same year, he also won the Turf Classic at Belmont and was third in the Breeders' Cup Turf at Churchill Downs. Originally purchased for $4000 as a potential steeplechaser, he was more at home on the flat. His trainer Tom Voss said, "He wasn't a good jumper." At the end of his racing career, John's Call was turned out for a short period before it was decided he would stay with Voss as the stable pony because of his quiet temperament. "John's Call was always quiet, even as a race horse," Voss said "He was the easiest horse in the barn to ride."

In addition to his duties as stable pony, John's Call also leads the post parade for the race named in his honor every year. As you can see, he is still quite fit at age 17. You can see a photo of him from 2000 here for comparison. John's Call won 16 races in 40 starts with earnings of $1,571,267.