The Cathay Pacific Hong Kong Cup provided a thrilling finish in which Irish raider Alexander Goldrun became the first filly to triumph in the race's history.

Trainer Jim Bolger and jockey Kevin Manning had been quietly confident through the week as their filly had shone in track work but were concerned after the barrier draw. "Her draw was a worry, gate 12 wasn't a help but on the day she broke well and got into a good early position behind Rakti," said Manning.

Alexander Goldrun had a light autumn campaign after some good efforts in the Irish and French Guineas. Her first Group One win came at Longchamp over today's trip of 2000m when she romped home in the Prix de l'Opera.

"After France there were no options for her to have a prep race but this was always the plan. She will now stay in training for next season," said Bolger.

Just a short head back in second was local challenger Bullish Luck who came so close to giving the Cruz/Coetzee patnership another memorable day. "We were expecting a big run. Tony (Cruz, trainer) told me whatever happened to switch him off in behind. He is the kind of horse that can quicken up of a slow pace like he did when he won the Gold Cup here last term. He lugged in a bit under pressure and that might probably have cost him."

Big race favourite Rakti ran much better than in Japan but did not show the form he did in the race last year when he finished second to Falbrav and in Group One races in Europe this year.

"He's not quite the horse he was at the start of the season. Better than he was in the Japan but still not quite at his top. He just couldn't find that extra gear. He really gave me nothing in the straight," reported his jockey Philip Robinson. The horse had been very difficult in his track work earlier in the week, bolting on several occasions.

There were three other Group One races on the card which were run before the Hong Kong Cup. Here are the results for those. 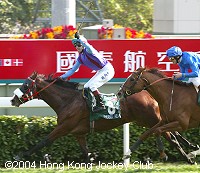 Phoenix Reach outstayed Sights On Gold as overseas runners dominated the finish to the Cathay Pacific Hong Kong Vase (2400m), the first of the four Group One races of the Turf World Championships at Sha Tin. Phoenix Reach broke his bridle just before the start to fulfil a dream come true for his trainer before his Japan Cup bid. "Before the Japan Cup I dreamt that he had broken the bridle and we had got one of Aidan O'Brien's to replace it and he won. It didn't happen then, but I wasn't too worried when I saw he broke his bridle before the start here." Winning jockey Martin Dwyer was overjoyed at the outcome. "They went very slow so I wanted to be near the pace and at the three and a half pole (700m) I quickened and he was electric. I was aware of Frankie (Dettori) looming up on my outside and I can tell you that's not a nice sight but my lad just kept pulling out more. He had a strong finishing burst," Dwyer said. 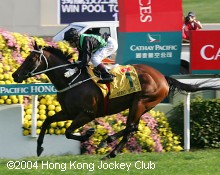 The greatest horse ever trained in Hong Kong, Silent Witness became the first local horse to defend an international title with a win of extraordinary ease in the Cathay Pacific Hong Kong Sprint (Gr.1-1000m). This year's Sprint was effectively the turf sprinters' world championship, featuring the best speedsters from Hong Kong, Europe and Japan, with strong representation from Australia and the United States thrown in for good measure. Silent Witness will remain in Hong Kong through to early next April to "hopefully clean up the three legs of the Champion Sprint Series and that will bring us up to Cigar's winning record of 16 wins in a row," said trainer Tony Cruz. "We haven't confirmed any plans to take him overseas yet but we will target a race. It could be 1200m or 1400m. We really don't know. But I don't we have seen the best of him yet," Cruz added. 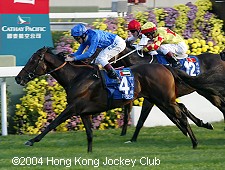 Firebreak, Godolphin's tough and consistent five-year-old, landed the first Group One victory of his fine career when gamely winning the Cathay Pacific Hong Kong Mile at Sha Tin. Firebreak, improving markedly on his fifth place in the same race last year, was given a masterful ride Frankie Dettori, who always had his horse travelling comfortably in behind the leaders. When he made his move behind the pace-making Scintillation at the 200m, he ground down the leader and forged clear to beat local runner Perfect Partner, by three-quarters of a length, with another Hong Kong horse, The Duke, closing strongly a length away in third. A delighted Dettori said: "I am so pleased for this horse to get a Group One win. He may not be that flash but he always tries for you. He can maybe only run four times a year, but you know when he comes to the races he will give you a run for your money and he certainly did that today. You could set your clock by this horse. He will always give you 110 per cent."