The feature race on Memorial Day at Santa Anita is the $400,000 Hollywood Gold Cup (G1) a 1 1/4 mile trip over the main track for the top older horses on the west coast. Conditions were typical for Southern California in late May, with sunny skies, temperatures in the high 70's, with the main track fast and the turf course firm. Last year's runner-up Royal Ship was sent off as the even-money choice in the short field of 5 off his win in the John Shear Mile. In to challenge him included 3-2 second choice Stilleto Boy, winner of the Californian (G2) after finishing third in the Santa Anita Handicap (G1), and 11-2 third choice Defunded, winner of two straight allowances after finishing second in the Los Alamitos Derby (G3).

Jockey Abel Cedillo sent Defunded to the lead first time by through fractions of 22.76, 46.13, and 1:10.99 while pressed by Stilleto Boy and stalked by Royal Ship. and 9-1 fourth choice There Goes Harvard. Turning for home Defunded continued to lead through 1 mile in 1:35.85. There Goes Harvard moved out 3 wide under jockey Irad Ortiz Jr. and rallied by to win by a length in 2:02.66. It was another 3 1/4 lengths back to favorite Royal Ship third. 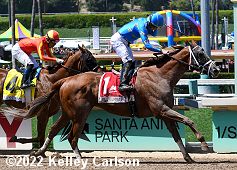 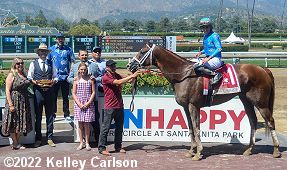 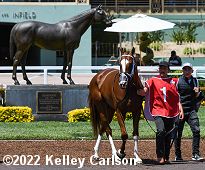 Left: There Goes Harvard in the winner's circle. Winning jockey Irad Ortiz Jr. said, "All the fans here feels good, it reminds me of home, I enjoy it. I had a perfect trip. There Goes Harvard was fighting a little bit with me going into the first turn, they went a little fast. I tried to let him relax, settle a little bit and he did come back to me on the backside. That was the key, after that I was just biding my time and kicked him out down the stretch, and he responded really well. I just trusted the trainer Mr. McCarthy. He told me he was ready. His whole team they did a great job and they had him ready."

Right: There Goes Harvard in the paddock before the race. Winning trainer Mike McCarthy said, "I was pretty excited, when I saw him stick his head in front coming to the three-sixteenths pole I got a little emotional but things just worked out properly. Small field, you have to take a shot. The horse is doing well sometimes you just have to take a chance. I just can't thank Irad enough here. Everybody involved, my grooms, my guys, everyone in barn 59, big day. These are the kinds of races you get up for in the morning, you hope you're lucky enough to participate in, let alone win." 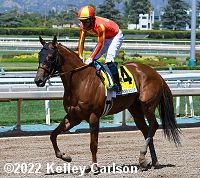 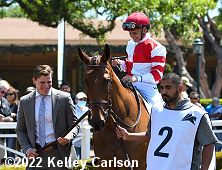 Left: Second place finisher Defunded returns after the race. Jockey Abel Cedillo said, "He was pretty strong early on, today I just left him there, I was not fighting with him at all and he tried really hard. I mean at a mile and a quarter, he ran a big race. I think this was his best race today he paid attention and tried hard."

Right: Third place finisher and beaten favorite Royal Ship in the paddock before the race. The Richard Mandella trainee improved his record to 7 wins, 2 seconds, and 4 thirds in 17 starts, earning $390,405 for owners Fox Hill Farms and Siena Farm.


Closing out the Monday stakes action was the $400,000 Gamely Stakes (G1) featuring a field of 6 older fillies and mares going 1 1/8 miles on the turf. Going Global was sent off as the 4-5 favorite off her win in the Royal Heroine (G2) after finishing fifth in the American Oaks (G1). In to challenge her included 2-1 second choice Going to Vegas, second in the Buena Vista (G2) and Santa Ana (G3), and 5-1 third choice Ocean Road, an allowance winner after finishing sixth in the Breeders' Cup Filly and Mare Turf (G1).

Jockey Juan Hernandez sent 13-1 Canoodling to the lead first time by through fractions of 23.49, 47.81, and 1:11.65 while pressed by Going to Vegas and stalked by 19-1 Eddie's New Dream. Entering the lane Going to Vegas took over the lead through 1 mile in 1:35.11, but Ocean Road, last early under Umberto Rispoli, came out four wide and rallied by to win by 1/2 a length in 1:46.66. It was another length back to favorite Going Global third. 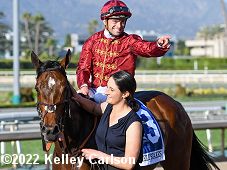 Left: Ocean Road in the winner's circle. Winning trainer Brendan Walsh said, "She was very impressive in her first start at Keeneland. We thought she'd need a run and with this race at 1 1/8, we thought it would be a good spot to take a shot. She has been doing really well since she ran, and she's been training really well. Her works have been better and she's just grown in confidence. The guys that came out with her here to Santa Anita have been telling me all week how good she's been doing, that she's just blossomed out here. Today, she had a bit of swagger about her. I knew she was going to run a good race, whether it was going to be good enough or not remained to be seen."

Right: Ocean Road returns after the race. Winning jockey Umberto Rispoli said, "It's very special, Sheikh Fahad (Qatar Racing) always was a big supporter of mine when I was in France and even overseas, a couple of times he came to run in Hong Kong with a couple of horses and I was always pleased to wear his colors. Before he's an owner he's a friend. I'm pretty sure the trainers are pleased to have him as an owner, he never complains he's a happy guy and I'm so happy to have a Grade I winner for him. Coming back and having a Grade 1 win here at (Santa Anita) makes me very happy." 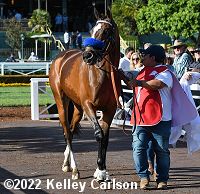 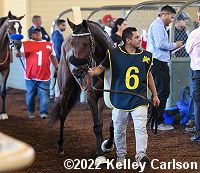 Left: Second place finisher Going to Vegas in the paddock before the race. The Phil D'Amato trainee improved her record to 7 wins, 11 seconds, and 2 thirds in 26 starts, earning $779,151 for owners Abbondanza Racing, Medallion Racing, and MyRacehorse.


Immediately after the Hollywood Gold Cup was the $500,000 Shoemaker Mile Stakes (G1) featuring a field of 6 older horses going 1 mile on the turf with the winner earning automatic entry into the Breeders' Cup Mile under the "Win and You're In" Challenge Series promotion. Breeders' Cup Mile (G1) runner-up Smooth Like Strait was sent off as the 2-5 favorite after finishing a close third in the Maker's Mark Mile (G1). In to challenge him included 5-2 second choice Count Again, sixth in the Maker's Mark after winning the Frank Kilroe Mile (G1), and 6-1 third choice Masteroffoxhounds, second in the Charlie Whittingham (G2). 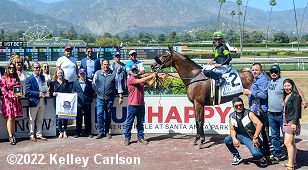 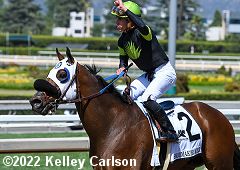 Left: Count Again in the winner's circle. Winning jockey Irad Ortiz Jr. said, "I just followed instructions. Phil told me to let him do his thing and don't rush him. He has a big turnoff foot. The horse was ready to run today, was ready to win. They went a little fast, but I wasn't too far (back). Honestly, I was happy where I was with my horse. Most of the time, he comes from off the pace. I just wanted to be in contact with the field and when he put me right there in the first turn…I said, ‘Why not', let him be there and he responded really well. When I went through horses at the quarter pole, Phil told me to make sure to keep him outside down the stretch. In the clear and that's what I did. When we were in the clear, I asked him and (he) took off."

Right: Count Again returns after the race. Winning trainer Phil D'Amato said, "He was in great position today and turning for home, he had the leader measured. He was sitting on a big race today. This puts him in a position to win the Breeders' Cup Mile in November." 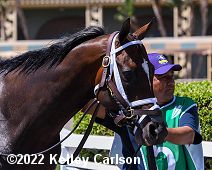 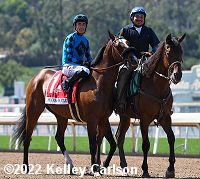 Left: Second place finisher and beaten favorite Smooth Like Strait in the paddock before the race. The Mike McCarthy trainee improved his record to 7 wins, 8 seconds, and 3 thirds in 21 starts, earning $1,581,573 for owner-breeder Cannon Thoroughbreds.