The feature race on Memorial Day at Santa Anita is the $300,000 Hollywood Gold Cup (G1) a 1 1/4 mile trip over the main track for the top older horses on the west coast. Conditions were typical for Southern California in late May, with sunny skies, temperatures in the low 80's, with the main track fast and the turf course firm. Country Grammer was sent off as the 9-5 favorite in the field of 7 off his close second place finish in the Californian Stakes (G2) in April. In to challenge him included 2-1 second choice Express Train, 3rd in the Oaklawn Handicap (G2) after finishing second in the Santa Anita Handicap (G1), and 3-1 third choice Royal Ship, winner of the Californian after finishing 5th in the Frank Kilroe Mile (G1).

Jockey Umberto Rispoli sent 19-1 Brown Storm to the front first time by and he set fractions of 22.92, 47.16, and 1:12.09 while pressed by Country Grammer and stalked by Royal Ship. On the far turn jockey Flavien Prat sent Country Grammer to challenge for the lead through 1 mile in 1:37.18. Royal Ship took over the lead midstretch through 9f in 1:49.37 but Country Grammer fought back in the final 1/16 to win by a head in 2:02.23. It was a long 4 1/4 lengths back to late-running Express Train third. 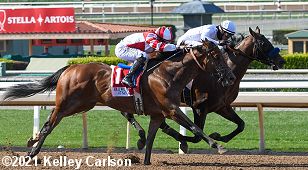 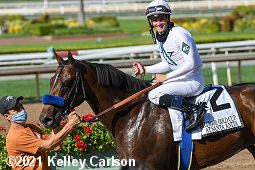 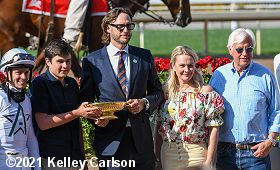 Left: Country Grammer in the winner's circle. Winning jockey Flavien Prat said, "He ran super well. He broke well and I was able to get myself in a good spot. I was a little bit worried when I saw Mike Smith (aboard Royal Ship) on the outside of me, I wish I could have kept him inside. Mike took the lead on me, but my horse was really game to come back."

Right: The trophy presentation for the Hollywood Gold Cup with winning trainer Bob Baffert far right. Baffert said, "Elliott Walden and WinStar bought him to bring to California because they figured 1 1/4 mile was his distance. His form on the dirt was really good last year. It looked like he was beat today, but he kicked it in. I'm so happy for WinStar Group. It's exciting. He ran a big race last time and just got beat. He was really ready to go today and I think the distance was the key. He got it done with a lot of class and determination." 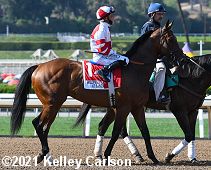 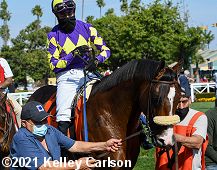 Right: Third place finisher Express Train in the paddock before the race. The John Shirreffs trainee improved his record to 3 wins, 4 seconds, and 2 thirds in 11 starts, earning $509,300 for owner C R K Stable.


Immediately after the Gold Cup was the $300,000 Gamely Stakes (G1) featuring a field of 7 older fillies and mares going 1 1/8 miles on the turf. Charmaine's Mia was sent off as the 9-10 favorite off a 3 race win streak including the Las Cienegas (G3), Buena Vista (G2), and Royal Heroine (G2). In to challenge her included 7-2 second choice Going to Vegas, winner of the Santa Ana (G3), and 9-2 third choice La Signare, third in the Jenny Wiley (G1). 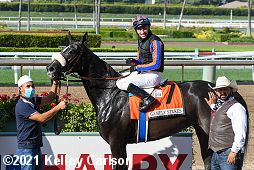 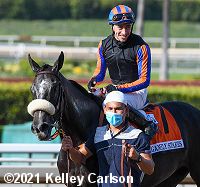 Left: Maxim Rate in the winner's circle. Winning trainer Simon Callaghan said, "We knew she was training really well coming into this race. We felt that the set up will be perfect. A mile and an eighth, back here in California I think is totally her game. We had some speed to run at and it actually turned out exactly how we wrote up the race before. The Grade 1 was our main aim and to pull it off is fantastic for all of the owners, all of the Slam Dunk Team, everyone involved. Now we'll just space the races out and it will be nice to get to the Breeders' Cup."

Right: Maxim Rate returns after the race. Winning jockey Juan Hernandez said, "I just watched a couple of replays of her. It looked like she was a really nice filly. She broke out of there, really clean break, she relaxed really well for me. She's a very classy filly, you can do whatever you want with her. I had a really good trip all the race and I just waited for the quarter pole to start working on her and when I asked her to go she took off. She's a very nice filly." 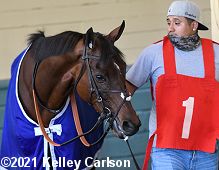 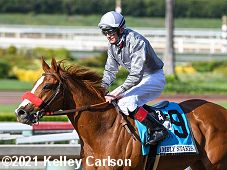 Left: Second place finisher La Signare in the paddock before the race. The Brendan Walsh trainee improved her record to 3 wins, 3 seconds, and 4 thirds in 18 starts, earning $405,576 for owners Madaket Stables, Tim and Anna Cambron, and Bradley Thoroughbreds. 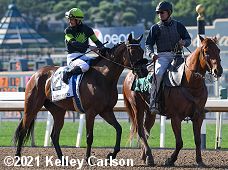 
Kicking off the Memorial Day stakes trio, the $300,000 Shoemaker Mile Stakes (G1) featured a field of 6 older horses going 1 mile on the turf with the winner earning automatic entry into the Breeders' Cup Mile under the "Win and You're In" Challenge Series promotion. Smooth Like Strait was sent off as the 7-10 favorite off a close third in the Old Forester Turf Classic (G1) after finishing second in the Frank Kilroe Mile (G1). In to challenge him included 3-1 second choice Say the Word, winner of the Elkhorn (G2), and 7-2 third choice Whisper Not, winner of the San Francisco Mile (G3). 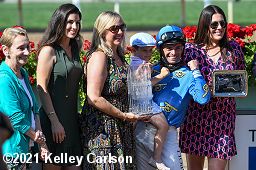 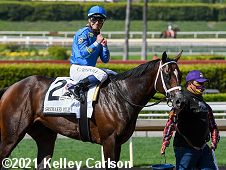 Left: Smooth Like Strait returns after the race. Winning trainer Mike McCarthy said, "Today feels very gratifying because the horse shows up and runs hard every time. I don't think he was getting the respect he deserved earlier in the year, but he showed up and put together a nice campaign. He was so relaxed for Umberto out there today. The horse responded beautifully to Umberto, they have become quite the partnership. I'm super happy for the horse and the connections. I've had an immense amount of faith in this horse all along, and I really believe that there are big things coming for him later in the year."

Right: The trophy presentation for the Shoemaker Mile. Winning jockey Umberto Rispoli said, "I was just waiting for a Grade 1 for this horse he deserves so much. So does the owner, Michael Cannon. He always says, 'Don't worry, we're gonna go to the Breeders' Cup'. He was positive from the first day. I was hoping to see him today but, I'll probably see him in Del Mar. I'm so glad for Michael (McCarthy) and the groom, who treats him like a son, also the work rider, they do an amazing job with this horse. He's so clever, so smart, he deserves a Grade 1. I love the way he runs, puts himself in the race, doesn't cheat and is a fighter. That's what we jockeys like, we fight with them and go down to the wire together and get the job done." 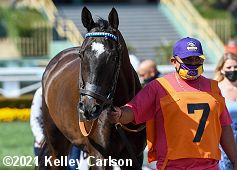 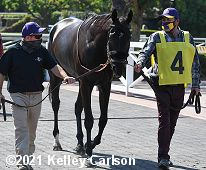 Left: Second place finisher Say the Word in the paddock before the race. The Phil D'Amato trainee improved his record to 6 wins, 4 seconds, and 5 thirds in 30 starts, earning $669,292 for owner-breeder Sam-Son Farm and co-owner Agave Racing Stable.