The $500,000 Gold Cup at Santa Anita (G1) at Santa Anita Park features the best older horses on the west coast. Formerly known as the Hollywood Gold Cup, after the Inglewood track closed its doors for good at the end of 2013 many of its stakes races were picked up by the other Southern California tracks. All four stakes races on Saturday were traditional Hollywood Park fixtures. A field of 11 older horses went to post in this 1 1/4 mile main track feature under cloudy skies and temperatures in the mid 80's before the 21,528 fans in attendance. Catch a Flight was sent off as the 8-5 favorite off wins in the Precisionist (G3) and the Californian (G2). In to challenge him inclueed 3-1 second choice Hoppertunity, third in the Stephen Foster (G1) and San Antonio (G2), and 4-1 third choice Moreno, winner of the Charles Town Classic (G2) but second in the Californian.

105-1 Batti Man was quickest away through an opening quarter of 23.37 before 47-1 Big Cazanova took over on the clubhouse turn through a half in 45.90 and 3/4 in 1:10.17 while stalked by Catch a Flight and Moreno. Entering the stretch, Big Cazanova continued to lead through 1 mile in 1:35.91, with Catch a Flight moving up to challenge. The favorite gained a short lead at the 1/8 pole but 7-1 fourth choice Hard Aces came through on the inside and held off late-running Hoppertunity on the outside to win by a nose in 2:02.46. It was another 1 1/4 lengths back to Catch a Flight third. 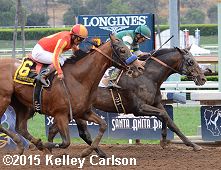 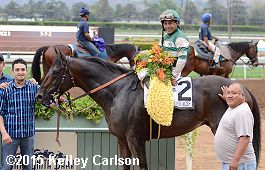 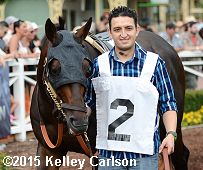 Left: Hard Aces in the winner's circle. Winning trainer John Sadler said, "We got a good trip. We were hoping the pace would be there; we saw 45 and change, it looked like there was a lot of speed, but it's got to come together. He's a very difficult horse to ride, so Victor's gone forward with him for two or three races. He was a good fourth in the Big Cap, then he came back with a good third here and put it all together in the big one today. We thought the last race was key. He really stepped forward with a strong race right at the end of 1 1/8 and he got some more pace today. Pacific Classic (next start). He'll stay home and run right in our own back yard at Del Mar."

Right: Hard Aces in the paddock before the race. Winning jockey Victor Espinoza said, "I think by the 1/2 mile pole I was committed. I already lost ground at the start from being bumped a little by Batti Man; he took me out of the race a little. I decided not to encourage him early and save ground. I thought my best shot was to save ground and get through on the inside and it worked out well. He's improving. Every race, he's getting better and better. When he was back east he wasn't quite there but in his last race he ran good and today he ran great." 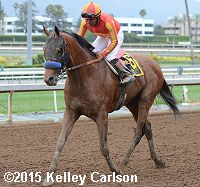 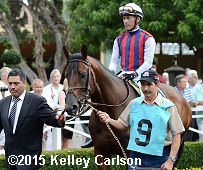 Right: Third place finisher and beaten favorite Catch a Flight in the paddock before the race. Jockey Gary Stevens said, "He ran a super race, he's as honest as any horse can get. I'm disappointed we didn't win but he runs his race every time and he tries hard, it's all you can ask. No real excuses, he had a good trip, the jock might have moved a little early."


Immediately before the Gold Cup, a field of 9 older fillies and mares competed in the $200,000 Royal Heroine Stakes (G2) at 1 mile on the turf. Santa Barbara (G3) winner Queen of the Sand was sent off as the 2-1 favorite after finishing 8th in the Gamely (G1). In to challenge her included 3-1 Birdlover, winner of the Mizdirection, and 4-1 Fanticola, second in the Gamely (G1).

Birdlover went to the lead first time by and set fractions of 23.44, 48.00, and 1:12.60 over the firm course while pressed by Fanticola. Birdlover continued to lead to the 1/8 pole through 7/8 in 1:24.68 but tired badly soon after. Fanticola inherited the lead and held off late-running favorite Queen of the Sand to prevail by a neck in 1:36.76. It was a length back to 11-1 Stormy Lucy third. 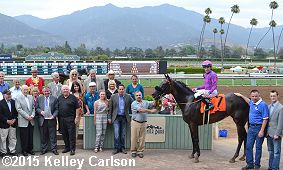 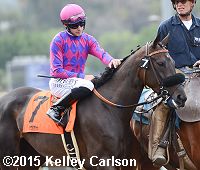 Left: Fanticola in the winner's circle. Winning trainer Phil D'Amato said, "She deserved this. She'd been knocking on the door and had two tough beats in her last two, and this is kind of vindication for all her hard efforts. She's gotten better and better, with more confidence. Instead of waiting to run her at Del Mar, we decided to go here. Maybe we'll look at the Mabee (on Aug. 8) next."

Right: Fanticola in the post parade. Winning jockey Joe Talamo said, "She settled good off Birdlover and ran a real good race today. I thought the fractions were perfect. We went slow enough that it helped me and Mike (Smith aboard Birdlover). I'm glad we drew outside of Birdlover; we were able to track her and it worked out from there. I think she's been off the board only once, she runs hard. She's just been unlucky a few times. In her last out she just didn't see that other filly. She's a fighter, when she sees other horses, she'll fight." 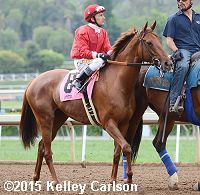 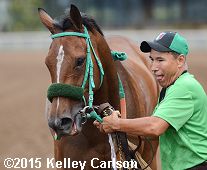 Left: Second place finisher and beaten favorite Queen of the Sand in the post parade. Jockey Rafael Bejarano said, "They went slow, the pace was slower in the beginning of the race and Fanticola and Joe took advantage of that. I wish I could put pressure on the leaders but Fanticola was in the perfect position to do it. My horse had a perfect trip but my horse has one run. I let her go and she had a little run in the stretch but Fanticola was still running strong."

Right: Third place finisher Stormy Lucy heads back to the barn after the race. The 11-1 shot raced 8th 4 3/4 lengths off the pace under Flavien Prat, then rallied to get third beaten 1 1/4 lengths. The Ed Moger Jr. trainee improved her record to 7 wins, 2 seconds, and 4 thirds in 27 starts, earning $551,450 for owner Steve Moger.


The $300,000 Triple Bend Stakes (G1) featured a field of 7 older horses sprinting 7 furlongs on the main track. Kona Gold (G2) winner Masochistic was the 11-10 favorite over 5-2 Sahara Sky, third in the Kona Gold, and 5-1 San Onofre, second in the Los Angeles (G3) and California Cup Sprint. 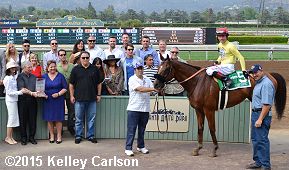 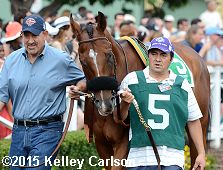 Left: Masochistic In the winner's circle. Winning owner Samantha Siegel said, "We're thrilled to death. Ron (Ellis) has done a wonderful job with him. I know he came with a history that he was a run-off horse and wouldn't rate, but after Ron got him and galloped him the first two days, he sent me a video and said, 'This is going to be a piece of cake. He's not half as bad as he was, so this will be easy.' He's responded to Ron's TLC and it's just been wonderful."

Right: Masochistic in the paddock. Winning jockey Tyler Baze said, "Ron gave him space in between races and this horse has just changed so much. Ron has done an unbelievable job with him. I worked him last week and he worked unbelievable. He worked in 10 and change and I just sat on him. I rode him today like I worked him last week, I was quiet and patient. Last week I didn't even let him run. Today, I let him run for about 1/16 mile. He was super-impressive. His head has changed, he's slowed down a bit. Last time when I rode him he was almost too aggressive. His head has calmed down and he was very classy about everything today. He quieted and he has really relaxed. I think he can go a mile, no problem." 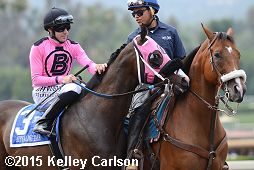 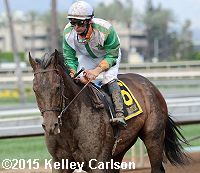 Left: Second place finisher Appealing Tale in the post parade. The 13-1 shot raced 1 3/4 length off the pace in fourth under Joe Talamo, then passed tiring horses to get second beaten 3 1/2 lengths. The Peter Miller trainee improved his record to 4 wins, 5 seconds, and 6 thirds in 22 starts, earning $343,222 for owners Gary and Cecil Barber.

Right: Third place finisher Wild Dude returns after the race. The 9-1 fourth choice faced 5th 4 lengths off the pace under Flavien Prat, then passed tiring horses to get third beaten 6 1/4 lengths. The Jerry Hollendorfer trainee improved his record to 5 wins, 3 seconds, and 4 thirds in 15 starts, earning $544,887 for owners Jerry Hollendorfer and Green Smith,


Kicking off the stakes action on Saturday, a field of 9 three-year-old fillies contested the $100,000 Senorita Stakes (G3) at 1 mile on the turf. Santa Anita Oaks (G1) fourth place finisher Curlin's Fox was sent off as the 4-5 favorite off an allowance win. In to challenge her included 9-2 second choice Avenge, winner of the Ultrafleet, and 7-1 third choice Long Hot Summer, fourth in the Evening Jewel before winning an allowance. 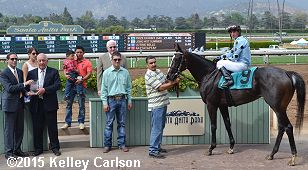 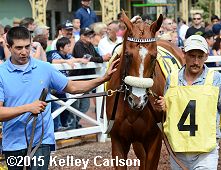 Left: Prize Exhibit In the winner's circle. Winning trainer Jim Cassidy said, "I told the jock to sit close, about third or fourth, and he didn't listen to me. I'm telling you the truth. After the race, I said to him, 'What happened to third or fourth?' He just looked at me and shrugged. At Penn National, she got back too far and there was no pace. She came running but she had so much to do, she just couldn't get there."

Right: Last place finisher and beaten favorite Curlin's Fox in the paddock. Jockey Mike Smith said, "She's been disappointing going around two turns, both times. In her defense, she's bled a bit when she's tried to go long. I hope she didn't today but at the same time if she did and it's not bad, then at least you have an excuse. She should be able to run a mile, she's so handy at 6 1/2."