The $500,000 Gold Cup at Santa Anita (G1) at Santa Anita Park features the best older horses on the west coast. Formerly known as the Hollywood Gold Cup, after the Inglewood track closed its doors for good at the end of 2013 many of its stakes races were picked up by the other Southern California tracks. All four stakes races on Saturday were traditional Hollywood Park fixtures. A field of 7 older horses went to post in this 1 1/4 mile main track feature under sunny skies and temperatures in the mid 80's before the 12,396 fans in attendance. Last year's winner Game On Dude was sent off as the 4-5 favorite off a second place finish in the Charles Town Classic (G2) after winning the Santa Anita Handicap (G1). In to challenge him included 7-2 second choice Furi Kapcori, second in the Californian (G2) last out, and 5-1 third choice Clubhouse Ride, winner of the Californian. The Gold Cup is a Breeders' Cup Challenge race with the winner earning automatic entry in the Breeders' Cup Classic (G1) at Santa Anita on November 1.

Jockey Gary Stevens sent Fury Kapcori to an contested lead of as many as 2 1/2 lengths through fast fractions of 22.38, 45.39, and 1:09.80, wih Game On Dude sitting second, in turn 2 lengths in front of 14-1 Majestic Harbor third. On the far turn, Furi Kapcori and Game On Dude tired as Majestic Harbor swept to the lead 4 wide, getting the mile in 1:35.14. Kept to task by jockey Tyler Baze, Majestic Harbor powered away to a 6 1/4 length win over Clubhouse Ride in 2:01.53 over the fast main track. It was another 1 3/4 length back to 7-1 fourth choice Imperative third, and 4 1/2 more to favorite Game On Dude fourth. 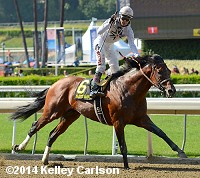 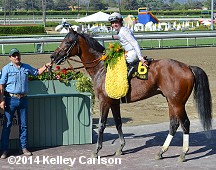 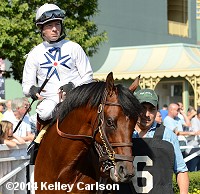 Left: Majestic Harbor in the winner's circle. Winning trainer Sean McCarthy, celebrating his first Grade 1 win, said, "It worked out perfectly for us. I was a little scared when Dude dropped out and gave Gary (Stevens on Fury Kapcori) the lead. Gary's a devil. He can get out there in front and shut that thing down on you and he had a helluva horse to do it with. The horse had a great week. You just hope that when you lead him over there, he fires, and he fired. I couldn't ask for things to have been any better. The Pacific Classic certainly is a race you've got to take a look at. He trains well over that Polytrack at Del Mar. I've never run him on it but I had him on it a couple years training over it, so we'll see how it plays out."

Right: Majestic Harbor in the paddock before the race. Jockey Tyler Baze said, "To do this for Sean, it means a whole lot for the guy that stood by my side. He gave me an opportunity to ride this horse first time out. I've gotten to know him, learn about him and learn how to ride him and I never lost any bit of faith in him. From the first time I got on him, I told Sean, 'This horse will make you. We'll win the Breeders' Cup with him.' I'm just looking forward to that and now we're goin' fishing! The guys that keep you going in these smaller barns, it just means so much. They have stood by me and they've been there for me. I'm happy to be able to do this so maybe they can get bigger. I knew we would win last week after I worked him." 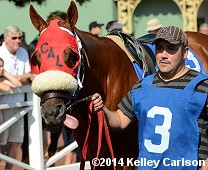 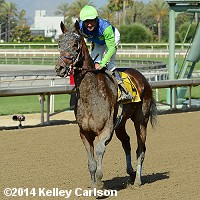 Left: Second place finisher Clubhouse Ride in the paddock before the race. The 5-1 second choice stalked the pace in fourth early under Joe Talamo then passed tired horses to get second beaten 6 1/4 lengths. The Craig Lewis trainee improved his record to 5 wins, 9 seconds, and 10 thirds in 38 starts, earning $1,320,132 for owners Six-S Racing Stable and Nick Petralia. 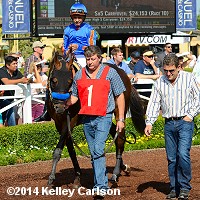 Fourth place finisher and beaten favorite Game On Dude in the paddock before the race. Jockey Mike Smith said, "I didn't want to be going that fast, but by the time we took back, we were already going real fast." When asked if he thought he had a chance at the 1/4 pole, Smith answered "No."


Kicking off the stakes action on Saturday, a field of 10 older fillies and mares competed in the $200,000 Royal Heroine Stakes (G2) at 1 mile on the turf. Parranda was sent off as the 2-1 favorite off her third place finish in the Gamely (G1) after winning the Wilshire (G3). In to challenge her included 9-2 second choice Kathleen Rose, winner of three straight allowance races and making her stakes debut here, and 5-1 third choice Moone's My Name, second in the Wilshire.

Jockey Edwin Maldonado sent Kathleen Rose to the lead and she set fractions of 23.72, 47.66, and 1:11.20 over the firm course while stalked by 21-1 Dutchessa and Parranda. Entering the lane, Dutchessa tired while Kathleen Rose stubbornly held on to the lead to mid-stretch through 7/8 in 1:23.25. However, Parranda, 3 wide for room, rallied down the stretch to outfinish Parranday by a neck in 1:35.27. It was 2 lengths back to 20-1 Molin de Mougin third. 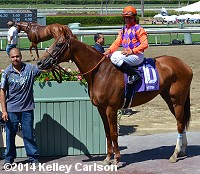 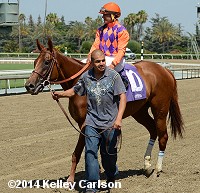 Left: Parranda in the winner's circle. Winning trainer Jerry Hollendorfer said, "Elvis rode a real good race, real smart, and helped us to win the race. We wanted to try and get out of there (the gate) and be tactical."

Right: Parranda returns after the race. Jockey Elvis Trujillo said, "Yeah, I'm happy with today. I was comfortable that she could finish strong. I knew I had a lot of speed and I was going to move at the 5/8. Desormeaux's horse (Dutchessa) being up there with (Kathleen Rose) really helped us today. I sat off those two and then moved." 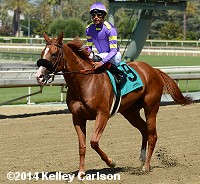 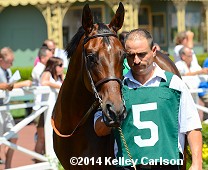 Left: Second place finisher Kathleen Rose returns after the race. Jockey Edwin Maldonado said, "She ran awesome, she's doing really well. She ran a huge race. We got chased a little bit by a horse that didn't have any shot (Dutchessa); otherwise I think I would have been there on the wire. I thought I would be alone on the lead. I'm happy with her performance today."

Right: Third place finisher Moulin de Mougin in the paddock before the race. Jockey Mike Smith said, "Great trip. I can't complain a bit. She got banged around a bit (on the first turn) and that caused her to step on herself. That took a bit of a quarter off (off her foot). But other than that, she ran extremely well, she had a great trip, she ran on through the wire and she ran a great third."


The $300,000 Triple Bend Stakes (G1) featured a field of 6 older horses sprinting 7 furlongs on the main track. Sahara Sky was sent off as the even-money favorite off his 7th place finish in the Churchill Downs Stakes after winning the San Carlos (G2) and finishing second in the Carter Handicap (G1). In to challenge him included 2-1 second choice Declassify, second in an allowance last out, and 5-1 third choice Cyclometer, winner of the Los Angeles (G3).

Cyclometer battled for the lead with Declassify exiting the chute and down the backstretch through fractions of 22.77 and 45.50 while stalked by 9-1 Wine Police and 30-1 longest shot Indexical. The pair continued their duel through the lane, getting 3/4 in 1:09.25, but in deep stretch, Declassify fought back along the rail to win by a nose in 1:22.03. It was another 1 3/4 length back to Indexical third, while favorite Sahara Sky failed to fire and checked in last. 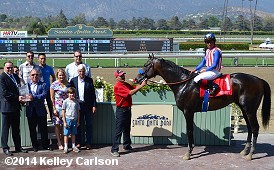 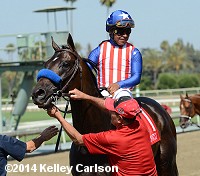 Left: Declassify In the winner's circle. Winning jockey Martin Garcia said, "I thought I was beat at the top of the stretch. My horse was trying everything, every step of the way. He never gave up. (Cyclometer) moved into me a little bit in the stretch and my horse was intimidated. He responded again though. He's such a good horse."

Right: Declassify returns after the race. Winning trainer Bob Baffert said, "I really didn't think we were going to get by (Cyclometer) there at the end, and the way (Declassify) fought back. I considered (Declassify) beat, and then when he gave that little surge and won it, that made the race even more exciting. It was a great run. He showed some real heart. You know, we're always looking for that inspirational moment and we got it with him today." 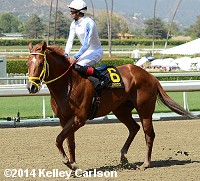 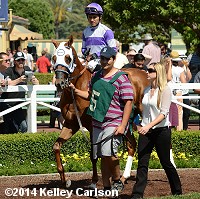 Right: Third place finisher Indexical in the paddock before the race. The 30-1 longshot stalked the pace in third under jockey Mario Gutierrez and held that position to the finish, beaten 1 3/4 lengths. The Ben Cecil trainee improved his record to 2 wins, 0 seconds, and 1 third in 7 starts, earning $119,800 for owner J. Paul Reddam. 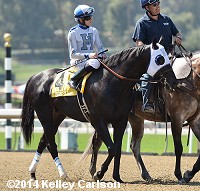 Sixth place finisher and beaten favorite Sahara Sky in the post parade. Jockey Joe Talamo said, "I had an absolutely perfect trip. I wish I had an excuse but he just didn't fire today. Before the half-mile pole I knew I was in trouble because that's when I was starting to get after him and he just never did respond."


Immediately before the Gold Cup, a field of 10 three-year-old fillies contested the $100,000 Seniorita Stakes (G3) at 1 mile on the turf. Penn National Oaks fourth place finisher Famous Alice was sent off as the 3-1 favorite over 7-2 second choice Clenor, second in the Ultrafleet Stakes, and 4-1 third choice Rovenna, off her wins in the Evening Jewel and the Melair Stakes. 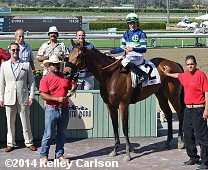 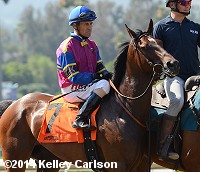 Left: Sheza Smoke Show In the winner's circle. Winning trainer Peter Eurton said of the layoff, "There was nothing wrong with her. We just thought at the time, we didn't want to face those (tough) fillies of Tom Proctor and Carla Gaines, and she was just kind of tailing off a little bit. I thought she needed some weight put on her, but we just kept her at the barn." Jockey Joe Talamo said, "I had a lot of horse, but I had to stay busy on her. Once she was out front it seemed like she was waiting on other horses. She ran a great race and we had an absolutely perfect trip. I was able to save ground on both turns and I took her out that last part and I had a ton of horse. Peter just told me 'good luck' today. Coming off that long of a layoff and to have her in stakes winning shape, I really tip my hat to him."