The $500,000 Hollywood Gold Cup Handicap (G1) at Betfair Hollywood Park features the best older horses on the west coast. Unfortunately, with the historic Inglewood track closing its doors for good at the end of the year, this will be the final running of the race. A field of 5 went to post for this 1 1/4 mile Cushion Track feature on Saturday, under sunny skies and with temperatures in the mid 70's before 6,443 fans. Defending champion Game On Dude was sent off as the 3-10 favorite off a 4 race winning streak including the Santa Anita Handicap (G1) and the Charles Town Classic (G2). In to challenge him included 7-2 second choice Clubhouse Ride, winner of the Californian (G2), the major local prep for this race, and 9-1 third choice Sky Kingdom, 6th in the San Juan Capistrano Handicap (G2) after winning the Tokyo City (G3). 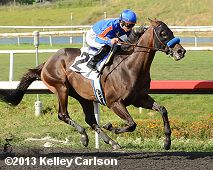 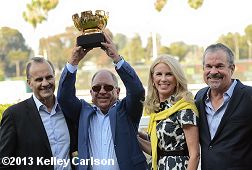 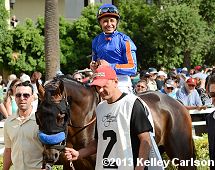 Left: In the winner's circle with MLB executive and former player and manager Joe Torre on the left and co-owner Bernie Schiappa holding up the trophy. Winning trainer Bob Baffert said, "He had that look today. He had control of the pace and everything went like we drew it up in our mind. "He just finds more gears as he goes along. There's added pressure when you train a horse like him. He has a fan base now. You don't want to see him get beat because of the fans. I can hear them cheering him on. When they turned for home, it was like the whole place was on my side. (Kettle Corn) made a nice move at him, but I was watching (Smith) and he never moved on him. He just sat on him, he knows this horse so well."

Right: Game On Dude in the paddock before the race. Winning jockey Mike Smith said, "He's a fighter. If you're going to beat him, you've got to flat run right by him. I tried not to win by too far. I was really happy with the outcome. He got himself together really quick after the race. He wasn't gutted. He was well within himself. When these horses get to be 6 or 7, and they stay sound, they get really strong. He doesn't have a soft spot on him. Me, I've got a soft spot here and there. I tuck that stuff in." 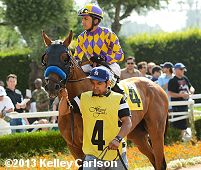 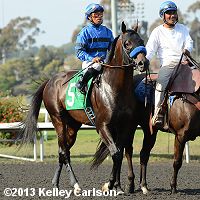 Left: Second place finisher Kettle Corn in the paddock before the race. Jockey Rafael Bejarano said, "There was no way I could beat the winner with that type of slow pace. They were walking so it was very tough to outrun him at the end."


Two hours before the Gold Cup, a field of 5 older fillies and mares competed in the $150,000 Royal Heroine Mile (G2) at 1 mile on the turf. Schiaparelli was sent off as the 11-10 favorite off her win in the Great Lady M Stakes after finishing second in the Las Cienegas (G3), over 3-1 second choice I Dazzle, third in the Marjorie L. Everett Handicap (G2), and 7-2 third choice Stormy Lucy, fourth in the Redondo Beach. 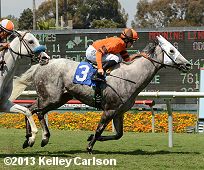 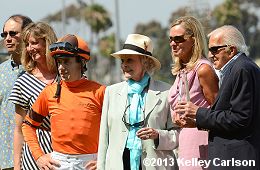 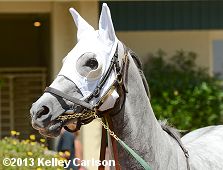 Left: In the winner's circle with actress June Lockhart (center wearing hat), . Winning trainer Mike Puype said, "She did what she was supposed to do, and I think with a legitimate pace. The first fraction looked like it was going to be a walk, but you could see them accelerate. They put up some sprint numbers. They crossed (3/4 in 1:09.74). Maybe the last 1/16 wasn't quite as good as the rest of the race, but it didn't matter, she did what she needed to do. I don't know what we're going to do next, but we'll probably keep her long on turf."

Right: Schiaparelli in the paddock before the race. Jockey Joe Talamo said, "I know the fractions were pretty quick but she was doing it well within herself. She was pressed all the way, and had to really fight the whole race to get the job done. She was kind of looking around a little bit down the lane, which she kind of does sometimes. I had to ride her a little harder than I thought I would have to. But she pulled it off and every time (Egg Drop) would get close to her she kept finding more. For her to get a mile, especially in (1:34.11) is a pretty good time for a filly stretching out for the first time. She's definitely got a future going long on the turf." 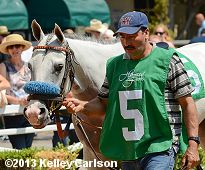 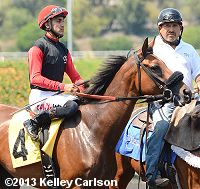 Left: Second place finisher Egg Drop in the paddock before the race. Jockey Martin Garcia said, "She ran big today. The winner is a really good filly, but my horse ran one of her best races. I knew we were going fast, but she was really comfortable. After today, I think she can handle more distance"

Right: Third place finisher My Gi Gi in the post parade. Trainer Peter Eurton said, "I think she's going to improve off this race. She's improving mentally and physically and I think as she goes a little farther, like 1 1/8 or 1 1/4, she'll do better. The speed just got away from her today."