The feature race on Labor Day at Del Mar was the $158,000 Generous Portion Stakes for 2-year-old California-bred or sired fillies going six furlongs on the main track. Conditions were typical for the seaside track in early September with sunny skies and temperatures in the low 80's. Chismosa was sent off as the 2-1 favorite in the field of 8, undefeated in 2 starts including the CTBA Stakes on August 7. In to challenge her included 9-4 second choice Uncontrollable off her debut win on July 22, and 11-4 third choice Big Hopes, a debut winner on August 13.

Jockey Armando Ayuso sent 14-1 Electric Lettuce to the lead out of the chute through an opening quarter in 21.73 before Chismosa moved up to gain the lead on the turn through a half in 45.13. Chismosa opened up a 6 length lead midstretch through 5f in 57.74. Uncontrollable put in a strong late rally from last but Chismosa, kept to task by Edgar Payeras, cruised the rest of the way to win by 1 3/4 lengths in 1:11.18. It was a long 7 lengths back to 9-1 Fun Money third. 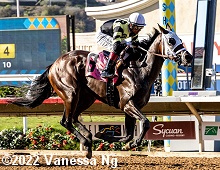 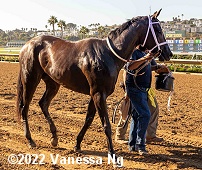 Left: Chismosa in the winner's circle. Winning trainer Rafael DeLeon said, "She is a power horse. She's been training super every day. Soon as he threw her to the rail (in the stretch) I knew I was going to win the race. Edgar knows the filly real good; he works her every single time and if she gets behind a horse, she responds and tries to pass. I think she can (run longer) if she doesn't go too early."

Right: Chismosa in the paddock. 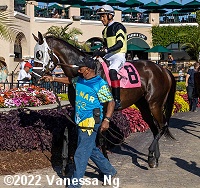 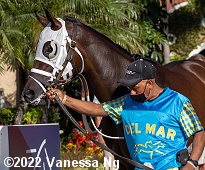 Left: Chismosa enters the paddock before the race. Winning jockey Edgar Payeras said, "She is an amazing filly. Through the turn I was too wide. I dropped in to save a little ground; when she feels the dirt in her face, she wants to go. She was, like, pulling. So I said 'Let's go.' She doesn't want to go alone. She likes the company, even in workouts."

Right: Chismosa heads out to the track. 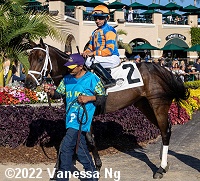 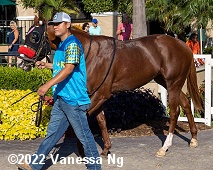 Left: Second place finisher Uncontrollable in the paddock before the race. Trainer Mike McCarthy said, "It seems it takes her a little while to get going. She's a stretch-running sprinter or two turns."

Earlier in the afternoon, the $100,000 Tranquility Lake Stakes featured a field of 7 older fillies and mares going 1 mile on the main track. Samurai Charm was sent off as the 9-5 favorite off her third place finish in the Desert Stormer Stakes (G3) followed by a second place finish in the Great Lady M (G2) at Los Alamitos. In to challenge her included 2-1 second choice Teddy's Barino, off a 3 race win streak all in allowance company, and 5-2 third choice Velvet Slippers, fifth in the La Canada (G3) before unseating her jockey in an allowance last out. 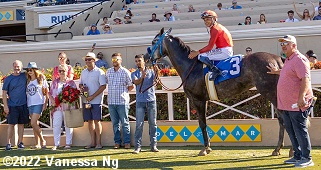 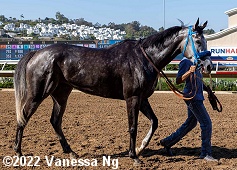 Left: Teddy's Barino in the winner's circle. Winning trainer Mark Glatt said, "Mike gave her a great ride. He had to make a decision to go up or take back, and he made the right one. That was one of the races where both deserved to win. I'm glad we did."

Right: Teddy's Barino heads back to the barn after the race. 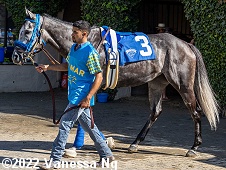 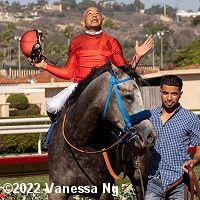 Left: Teddy's Barino in the paddock before the race. Glatt added, "She continues to climb the ladder," referring to a possible start in graded stakes company next time. 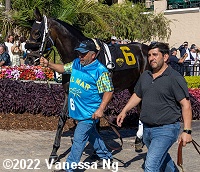 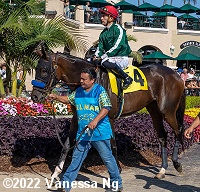 Right: Third place finisher Velvet Slippers heads out to the track before the race. The Bob Baffert trainee improved her record to 2 wins, 2 seconds, and 1 third in 8 starts, earning $126,350 for owners Sarah Kelly and Jane Wiltz.

The fillies break from the gate for the Tranquility Lake Stakes.