The last farm we visited on Saturday afternoon was Gainesway Farm which has 10 stallions. This open house was more organized as they brought out the stallions one at a time to display, although you could request one to return for a second look. The stallions were displayed in front of the breeding shed, then walked back to their barn. Here are photos of several for you to enjoy. Click the smaller photo to view a larger version. 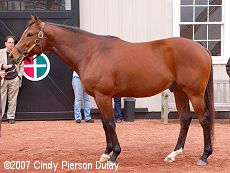 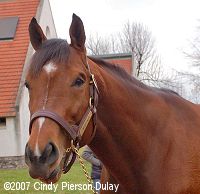 Afleet Alex was the Champion 3-year-old of 2005 and had 8 wins from 12 starts, including the Preakness and Belmont plus he was 3rd in the Kentucky Derby. As good as he was at 3, he wasn't shabby as a 2-year-old either with wins in the Hopeful and Sanford, plus 2nd in the Breeders' Cup Juvenile and Champagne. He retired late in 2005 after unsuccessfully trying to come back from a condylar fracture of his left front that showed up after the Belmont Stakes. His first foals will be born in 2007, so we will have to wait a while before we can see how well he passes on his talent. By Northern Afleet out of Maggy Hawk, Afleet Alex stands for a $40,000 stud fee. For more photos of Alex check the page from last year with photos from only a month after he had retired. 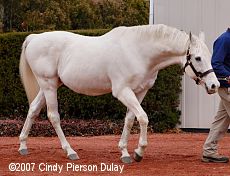 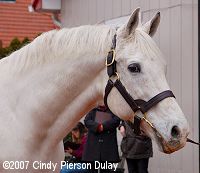 Cozzene was the Champion Turf Male of 1985 and won the Breeders' Cup Mile that year, one of 10 wins out of 24 career starts. He has been a success at stud too siring two Breeders' Cup champs, Classic winner Alphabet Soup and Turf winner Tikkanen, among his 71 stakes winners with total progeny earnings of over $73 million. He is 27-years-old now and this may be he last season at stud, but he still looks good. A son of Caro out of Ride the Trails, Cozzene stands for a $35,000 stud fee. 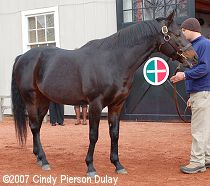 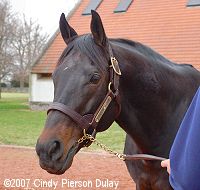 Strategic Mission won 7 of 24 starts lifetime with his only stakes win coming in the Fort Marcy Handicap. He didn't get much attention when he retired to stud with only 18 foals in his first two crops. Of the 12 to race so far, he has had 3 stakes winners, including Showing Up (winner of the Secretariat Stakes and Jamaica Breeders' Cup Handicap, 3rd in the Man O'War), Golden Strategy (Champion 2-year-old in Panama), and Miss Savannah. This should generate more interest in him for 2007. A son of the great sire Mr. Prospector out of stakes winner and multiple Grade 1 producer Sultry Sun, Strategic Mission stands for a fee of $10,000. 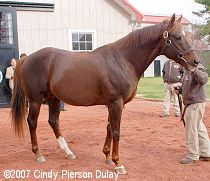 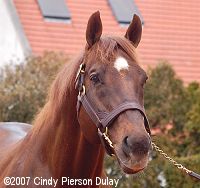 Mr. Greeley was a talented sprinter with 5 wins and 6 seconds from 16 starts. His wins included the Lafayette and Swale Stakes, plus he was 2nd in the 1995 Breeders' Cup Sprint. Out of 8 crops to race, he has 31 stakes winners so far with total progeny earnings of over $29 million. His top runners include Nonsuch Bay (Mother Goose winner), El Corredor (Cigar Mile winner), Greeley's Galaxy (Illinois Derby winner), and Horse Greeley (2006 Del Mar Futurity winner). A son of Gone West out of Long Legend, dam of 2006 Breeders' Cup Juvenile winner Street Sense, Mr. Greeley stands for a $60,000 stud fee. 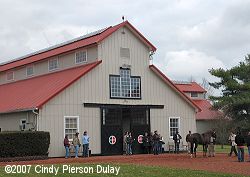 The breeding shed at Gainesway where the stallions were displayed.

You can see more of the Gainesway stallions on last year's farm tour.