The final farm we visited on Sunday was Castleton Lyons. By this time, it was pouring rain and very dark so they did everything inside their barn area. To say it was "challenging" to shoot there is an understatement, as the area was quite small and there were tons of people there. It was easily the most crowded open house of the six we attended. They have seven stallions and we managed to get decent photos of six of them. Their new stallion for 2007 is the French import Anabaa and you will notice lots of red jackets with his name on the back which were worn by all the staff. Click the smaller photos to view a larger version. 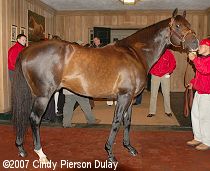 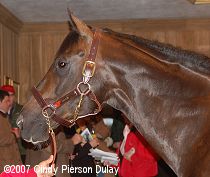 Anabaa raced at age 3 and 4 in France and England where he won 8 of 13 starts, including the Darley July Cup and Prix Maurice de Gheest and was named Champion older male in France. This is his first year in the US, but he has had great success as a sire in Europe and Australia with 28 stakes winners out of his first 7 crops to race. Some of his best runners so far at Yell (Champion sprinter in Australia), Martillo (champion 3-year-old and older male in Germany), Ana Marie (champion older mare in France), Anabaa Blue (winner of the French Derby), and Headturner (winner of the Australian Derby). By the late great Danzig out of the Group one winner Balbonella, Anabaa will stand for an introductory fee of $40,000 in 2007. 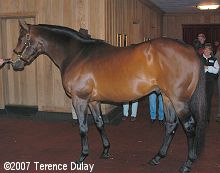 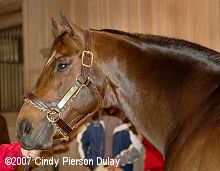 Malibu Moon had a very brief career with only 2 starts at age 2 with only a maiden special weight win at Hollywood Park. With only 4 crops to race so far, he already has 18 stakes winners and his progeny won over $3.8 million in 2006. His best runners so far are Champion 2-year-old of 2004 Declan's Moon, multiple graded stakes winning sprinter Malibu Mint, Best Pal Stakes winner Perfect Moon, Federico Tesio Stakes winner Ah Day, and multiple stakes winner Malibu Moonshine. By the brilliant sire A.P. Indy out of French Group 1 winner Macoumba, Malibu Moon stands for a $40,000 stud fee. 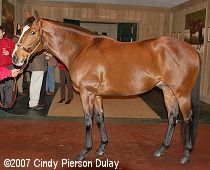 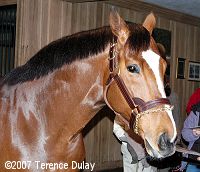 Toccet was a brilliant 2-year-old who never found his niche in his 3 and 4 year old seasons. Winner of 6 out of 8 starts at 2, he finished with only 7 out of 23 wins lifetime. His wins at 2 included the Champagne, Hollywood Futurity, and Remsen Stakes with the Widener Stakes at age 3 his only other win despite trying him in everything from 7 furlongs on the dirt to 1 1/2 miles on turf. His first foals will be yearlings in 2007, so we have yet to see if he can pass on his 2-year-old brilliance to his babies. By Breeders' Cup Classic winner Awesome Again out of Cozzene's Angel, Toccet stands for a $20,000 stud fee. 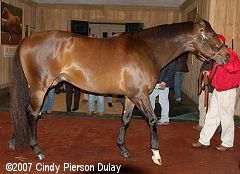 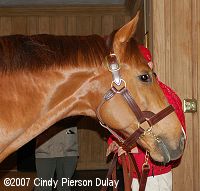 Action This Day was another promising 2-year-old who never had success afterwards, going winless at ages 3 and 4. His big moment and only stakes win was in the 2003 Breeders' Cup Juvenile. His first crop will be yearlings in 2007 so it will be a while before we see what they can do on the track. By Kris S. out of Majecam, Action This Day stands for a $10,000 stud fee. 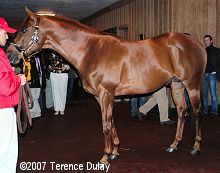 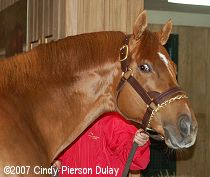 Wiseman's Ferry raced in England and Ireland at age two before coming to the US. He had his best year as a 3-year-old where he won 3 of 8 starts including the West Virginia Derby and Lone Star Derby plus a 2nd in the Ohio Derby. He retired after going winless in 2 starts at age 4. His first babies will be 2-year-olds in 2007, so this year will give us a better idea what kind of runners he can sire. By Hennessy (who you can see at Ashford) out of Emmaus, Wiseman's Ferry stands for a stud fee of $8,500. 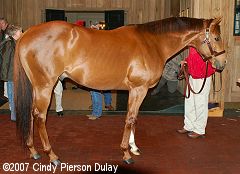 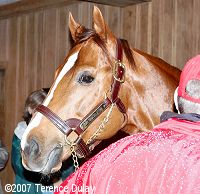 Sir Shackleton had 7 wins from 20 starts at ages 3 to 5, including the West Virginia Derby, Derby Trial, and Richter Scale Breeders' Cup. He also raced in top company with a 2nd in the Woodward to Saint Liam, 3rd in the Whitney to Commentator and 3rd in the Met Mile to Ghostzapper. This year will be his first season at stud, so we won't get to see any of his foals until 2008. By Miswaki out of Naskra Colors, Sir Shackleton will stand for a $7,500 stud fee. 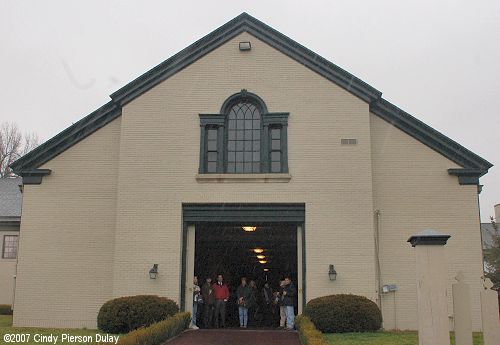 Because of the rain, I wasn't able to take many outside photos but did get this quick shot of the side of the stallion barn. The layout there was different with the barns right behind the office and the breeding shed behind those, all in one big building complex.