The highlight race of the second Saturday of Del Mar's summer meeting is the $250,000 Eddie Read Stakes (G2) for older horses going 1 1/8 miles on the Jimmy Durante turf course. Conditions were cool for late July on the beach with cloudy skies and the temperature near 70, with 10,383 fans in attendance. Smooth Like Strait was sent off as the even-money choice in the field of 7 off his win in the Shoemaker Mile (G1) after finishing a close third in the Old Forester Turf Classic (G1). In to challenge him included 3-1 second choice United, 4th in the Charlie Whittingham (G2) after winning the San Luis Rey (G3), and 4-1 third choice Count Again, unraced since 4th in the Old Forester Turf Classic.

Jockey Juan Hernandez sent 15-1 Award Winner to the lead exiting the infield chute through easy fractions of 25.19, 49.43, and 1:14.01 over the firm going while pressed by Smooth Like Strait and stalked by 27-1 longest shot Vintage Print. Entering the stretch, Award Winner tired allowing Smooth Like Strait to inherit the lead through 1 mile in 1:38.07 but United, 5th early under Flavien Prat, came out 3 wide for room and rallied to get up by a neck in 1:49.49. It was another length back to late-running Count Again third. 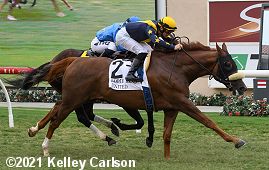 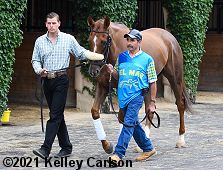 Left: United in the winner's circle. Winning trainer Richard Mandella said, "He ran well and I'm very proud of him. He was coming off a terrible race, I've never had him run that bad. We worried and watched and did every test you can do on him and we found a bruise under his shoe two weeks old. It didn't seem like that big a deal, but it must have been. We'll probably look at the Del Mar Handicap next."

Right: United in the paddock. Winning jockey Flavien Prat said, "I could tell the fractions were slow; I could feel it. But my horse was travelling well and he was comfortable. I knew his last race wasn't his real race and I felt he'd run better today. The only question was being able to get out. He did and ran well through the lane. He's back." 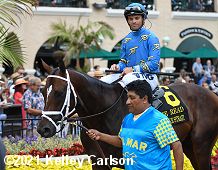 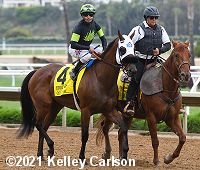 Left: Second place finisher and beaten favorite Smooth Like Strait in the paddock before the race. The Mike McCarthy trainee improved his record to 7 wins, 4 seconds, and 2 thirds in 16 starts, earning $983,823 for owner-breeder Cannon Thoroughbreds.


Two hours after the Eddie Read, a field of 10 three-year-old fillies went 1 mile on the turf in the $200,000 San Clemente Stakes (G2). Going Global was sent off as the 2-5 favorite off 5 straight wins including the Providencia (G3) and Honeymoon (G3) at Santa Anita. In to challenge her included 11-2 second choice Madone, 6th in the Honeymoon after winning the Senorita (G3), and 19-2 third choice Karakatsie, a close second in the Martha Washington at Gulfstream.

Jockey Abel Cedillo sent 29-1 Nimbostratus to the lead first time by and she set fractions of 22.26, 45.86, and 1:11.12 while pressed by 35-1 Equilove and stalked by 20-1 Pizzazz. On the far turn Nimbostratus tired badly as Pizzazz inherited the lead through 7f in 1:23.63 before also fading badly. Madone, 8th early under Juan Hernandez, came out 5 wide into the stretch and outfinished Going Global to win by 1/2 a length in 1:35.28. It was another length back to 13-1 Tetragonal third. 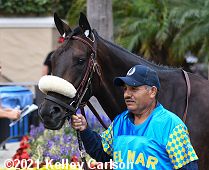 Left: Madone in the winner's circle. Winning trainer Simon Callaghan said, "We were able to save ground and they were going quick early, so I was happy with our spot early. Juan made a wide early move but it was the right one. She's got a nice turn of foot and she's such a good filly. I blame myself (for sixth-place result in the Grade 3 Honeymoon on May 22 at Santa Anita); I ran her back too quickly. She bounced, it's as simple as that. We'll now look to the Del Mar Oaks."

Right: Madone in the paddock. Winning jockey Juan Hernandez said, "That was the plan, to lay back then come running. Simon (trainer Simon Callaghan) said to keep her covered up and save ground. That's what I did. On the turn (for home), I took her out and she gave it to me. She really came running. Nice win for sure." 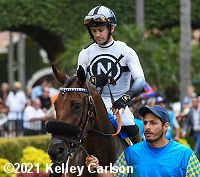 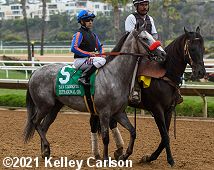