The highlight race of opening weekend at Del Mar is the $400,000 Eddie Read Stakes (G1) run on Saturday. The 12,609 fans at the oceanside track braved unusually wet conditions and temperatures in the low 70's. A field of 7 older horses contested this 1 1/8 mile contest over the Jimmy Durante Turf Course, with last year's Del Mar Derby (G2) winner Midnight Storm sent off as the 6-5 favorite off a second place finish in the Shoemaker Mile (G1). In to challenge him included 2-1 second choice Finnegans Wake, winner of the Woodford Reserve Turf Classic (G1) but 4th in both the Manhattan (G1) and Santa Anita Gold Cup (G1), and 9-2 third choice Gabriel Charles, third in the American (G3) last out.

Jockey James Graham sent 9-1 Big Cazanova to the front first time by and he set fractions of 23.43, 47.26, and 1:11.04 while pressed by Midnight Storm. Entering the lane, the pacesetters tired as 11-1 Twentytwentyvision, 4th early, gained a short lead through 1 mile in 1:35.95. Gabriel Charles, 6th early, came out wide for room, taking over inside the 1/8 pole to win going away by 3 3/4 lengths over Twentytwentyvision in 1:48.13 over the good turf course. It was another 1 1/2 lengths back to Finnegans Wake third, while favorite Midnight Storm faded to 5th. 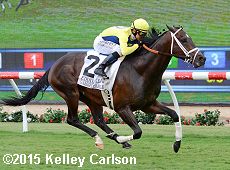 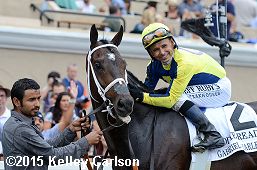 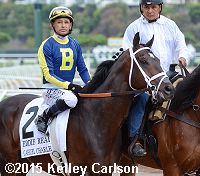 Left: Gabriel Charles in the winner's circle. Winning trainer Jeff Mullins said, "The early fractions were well enough that I thought we were OK. He was perched up on him like they were going a two-minute mile and when he swung him into the clear I could see he had plenty of horse. How many horses bow a tendon and come back and win a Group 1? We took our time with him and that was the key. We knew he had this caliber of talent, it was a matter of keeping him healthy. We were worried about the turf course after the rain but Mike said the course was great."

Right: Gabriel Charles in the post parade. Winning jockey Mike Smith said, "I don't think it rained on the turf course; only the main track. It was plenty fast. My horse was so nice and comfortable; going along so easy. I was watching the competition up front, but I thought I could handle them. I was worried about (Finnegans Wake). I knew he was going to be coming and he's run some big ones. On the turn I gunned (Gabriel Charles) to put a little distance between myself and the rest. I guess I sure did. He was impressive." 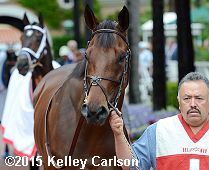 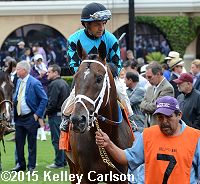 Left: Second place finisher Twentytwentyvision in the paddock before the race. Jockey Flavien Prat said, "He really ran great. The winner was just too much today. But my horse is a very good one."

Right: Third place finisher Finnegans Wake in the paddock before the race. Jockey Victor Espinoza said, "He just got a little tired at the end. Maybe he came back a little quick. But he always tries; he always runs his race. Today just wasn't his day." 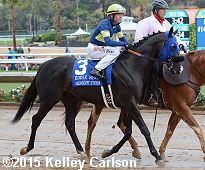 Fifth place finisher and beaten favorite Midnight Storm in the post parade. Jockey Tyler Baze said, "He just never got comfortable. I'd like to blame it on the course, but I don't think that was it. He just couldn't get into a rhythm today." 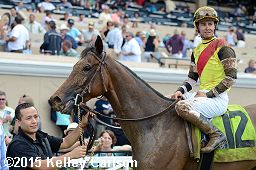 Gas Total in the winner's circle. Winning trainer Richard Mandella said, "She's good on any surface. She's a nice mare. Not great, but nice." Mandella added that she may go next in the Yellow Ribbon Handicap (G2) on September 6.