The highlight race of opening weekend at Del Mar is the $300,000 Eddie Read Stakes (G1) run on Saturday. The 19,586 fans at the oceanside track enjoyed a cool afternoon under mostly cloudy skies and temperatures near 70. A field of 9 older horses contested this 1 1/8 mile contest over the Jimmy Durante Turf Course, with Jeranimo sent off as the 5-2 favorite off his fourth place finish in the Shoemaker Mile (G1) at Hollywood. In to challenge him included 3-1 second choice Sofast, seventh in the Prix d'Ispahan at Longchamp, and 9-2 third choice Fed Biz, off a fifth place finish in the Metropolitan Handicap (G1) at Belmont. 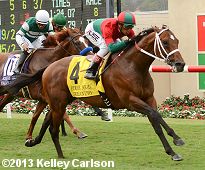 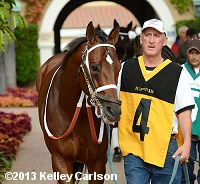 Left: Jeranimo in the winner's circle. Trainer Mike Pender said, "It seems almost surreal to say the horse redeemed himself when he had nothing to prove. They're going to say this was a weak rendition of the Eddie Read, but all he has done is run second to Accclamation (in 2011) and take down the winning honors today. I think when Jeranimo is in a real horserace, where there's speed, tactical speed and deep closers like himself, that's when he's able to shine. And today he had perfect conditions."

Right: Jeranimo in the paddock before the race. Jockey Rafael Bejarano said, "I could tell they were going kind of fast up there and I knew that would be good. My horse likes to make that last run and he's really got a good kick. You can do what you want with him. He's so classy. I have a lot of confidence when I ride him." Jeranimo could go next in the Arlington Million or the Pacific Classic. 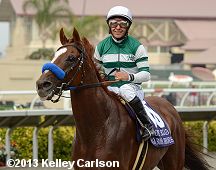 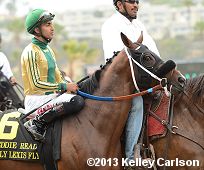 Left: Second place finisher Vagabond Shoes returns after the race. Jockey Victor Espinoza said, "I had a perfect trip. He put in a good close for me; an unbelievable close actually. And he'll run better next time, too."

Right: Third place finisher Fly Lexis Fly in the post parade. Jockey Edwin Maldonado said, "He handled the turf great and I had a beautiful trip. I couldn't ask for more from him." 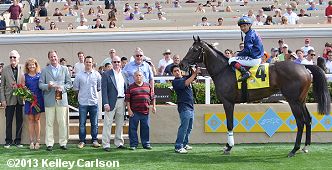 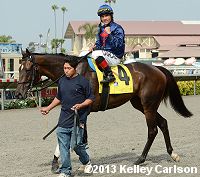 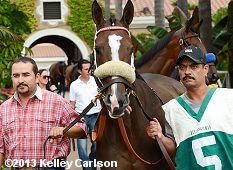 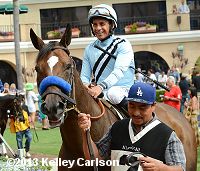 Left: Second place finisher and beaten favorite Unusual Hottie in the paddock. The 7-5 favorite stalked the pace 5th early under jockey Joe Talamo, then closed well but just missed by a neck. The Jeff Mullins trainee improved her record to 7 wins, 4 seconds, and 2 thirds in 15 starts, earning $370,928 for owner Seyyed Nilforushan.

Right: Third place finisher I Dazzle in the paddock. The 11-2 fourth choice was last early under jockey Victor Espinoza, then finished well on the outside to get third beaten 1 length. The John Sadler trainee improved her record to 4 wins, 2 seconds, and 4 thirds in 19 starts, earning $217,345 for owners Katie Jones and Peter Peluso.