The feature race on Saturday at Del Mar was the $300,000 Del Mar Oaks (G1) for three-year-old fillies going 1 1/8 miles on the turf. Conditions were excellent as usual at the seaside oval with sunny skies and temperatures in the low 80's for the 20,757 fans in attendance. Prize Exhibit was sent off as the 7-5 favorite in the field of 8 off her wins in the Senorita (G3) and San Clemente Handicap (G2). In to challenge her included 7-2 second choice Sunset Glow, second in the Breeders' Cup Juvenile Fillies Turf (G1) and the San Clemente Handicap last out, and 6-1 third choice Sharla Rae, 7th in the Belmont Oaks (G1) and third in the Bourbonette Oaks (G3). 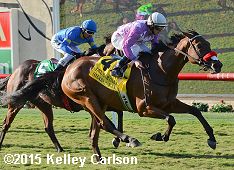 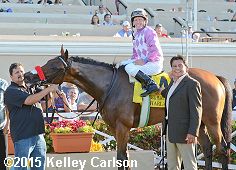 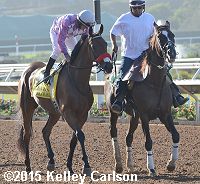 Left: Sharla Rae in the winner's circle. Winning trainer Doug O'Neill said, "I just loved (the way the race developed). It was like we had a walkie-talkie to James. He was in a perfect spot and this filly has been training great. Last time she ran in New York, Joel Rosario called me after the race and said ‘If I knew this filly she would have won.' He was afraid to use her early because he was afraid she'd run off. James put her in the race and she still shut it off and conserved herself. What a ride by James Graham. It was a matter of me getting it right. I had her on turf, dirt, synthetic and all over the place but (turf) is obviously where she wants to be. She's a quality turf filly."

Right: Sharla Rae in the post parade. Winning jockey James Graham said, "I've been working her for the last while and we've been trying to figure her out. She's got that wonderful late kick, but you've got to get it just right. Today it all came together. This is a treat for me; my first stakes win at Del Mar and it's a Grade I. I don't do things by half measure, do I? You need to hang in and have a bit of luck. Then it happens. I'm really enjoying it here. I'd love to stay. If things keep going like they have been, maybe I will." 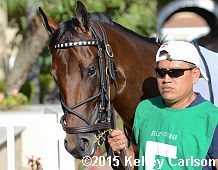 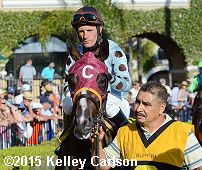 Left: Second place finisher Her Emmynency in the paddock before the race. Jockey Rafael Bejarano said, "I had her right behind the speed in a good spot. I was right where I wanted to be. When I asked her she was good, but the winner was too good. She went by me as much the best today."

Right: Third place finisher and beaten favorite Prize Exhibit in the paddock. Jockey Santiago Gonzalez said, "I didn't like the pace. She had too much to do."