The feature race on Saturday at Del Mar was the $300,000 Del Mar Oaks (G1) for three-year-old fillies going 1 1/8 miles on the turf. Conditions were excellent as usual at the seaside oval with sunny skies and temperatures in the high 70's. Sea Queen was sent off as the 7-5 favorite in the field of 8 off her second place finish in the Belmont Oaks Invitational (G1) after winning the Wonder Again, both at Belmont Park. In to challenge her included 3-1 second choice My Conquestadory, third in the San Clemente (G2) last out, and 4-1 Diversy Harbor, fourth in the San Clemente (G2) after finishing second in the American Oaks (G1).

Jockey Victor Espinoza sent My Conquestadory to the lead first time by and she set fractions of 23.31, 46.80, and 1:11.15 over the firm course while as many as 2 1/2 lengths in fron of Sea Queen, in turn 4 lengths ahead of the rest of the field. Entering the lane, Sea Queen drew even with My Conquestadory through 1 mile in 1:35.45. However, 9-1 Personal Diary, last early, came out wide for room and ran by the pacesetters at the 1/16 pole to win going away by 2 3/4 lengths over 11-1 Stellaris in 1:47.56. In a 4-horse photo for second, Stellaris was a neck in front of pacesetter My Conquestadory third, who nosed out favorite Sea Queen fourth, a neck ahead of fifth place 16-1 Famous Alice. 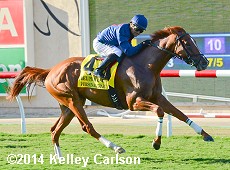 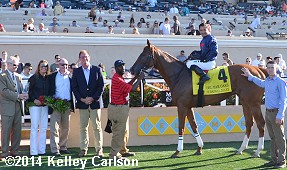 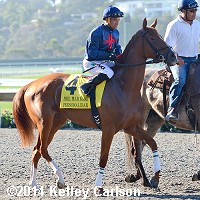 Left: Personal Diary in the winner's circle. Winning trainer Victoria Oliver said, "She's always been a very nice filly. She's had some troubled trips or she could have had a couple more wins. Today (Corey) Nakatani rode her perfect and it was her day. I thought she was good enough, absolutely. This is my first Grade 1 and it feels great."

Right: Personal Diary in the post parade. Winning jockey Corey Nakatani said, "I didn't get any instructions. Just go out there and do your thing. The race came up about the way I thought it would and my filly put me in the right spot. From there it was just a matter of making sure we did it good. She's a nice filly and it's going to be fun to see where she goes from here." 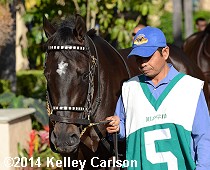 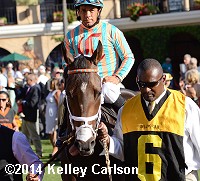 Left: Second place finisher Stellaris in the paddock before the race. Jockey Kent Desormeaux said, "She's the kind that can run all day. Now that I know her, I wished I would have moved her sooner. But she's a really nice filly and I'd say ‘mission accomplished.' Michael (trainer Michael Stidham) wanted to see if she belongs and she sure does."

Right: Third place finisher My Conquestadory in the paddock. Jockey Victor Espinoza said, "(Trainer Mark Casse) told me to ride it the way it came up. If she broke good, see what she can do. She broke running and I didn't want to take her out of the race so I just let her go. When we came into the stretch and (Sea Queen) came up to me, I thought I was done. But my filly fought back. She didn't want that one to get by us." 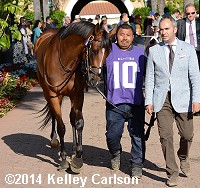 Fourth place finisher and beaten favorite Sea Queen heads into the paddock. Jockey Rafael Bejarano said, "I had a beautiful trip. I was right where I wanted to be. But then she was out of gas. It just wasn't there today."