The feature race on Saturday at Del Mar was the $300,000 Del Mar Oaks (G1) for three-year-old fillies going 1 1/8 miles on the turf. Kitten's Dumplings, winner of her last 3 starts, the Edgewood and Regret (G3) at Churchill followed by the Lake George (G2) at Saratoga, was sent off as the 8-5 favorite in the field of 10. In to challenge her included 9-2 second choice Discreet Marq, winner of the Sands Point (G2) and the Eventail at Belmont, and 11-2 third choice Wishing Gate, off her win in the San Clemente Handicap (G2)

Jockey Corey Nakatani sent 15-1 Need You Now to the lead first time by and she set fractions of 23.69, 48.67, and 1:13.00 over the firm course while pressed by 25-1 Unusual Way and stalked by Discreet Marq. Entering the stretch, Discreet Marq came out 3 wide for room, taking over the lead at the 3/16 pole through 1 mile in 1:36.18. Wishing Gate, 9th early, came through between horses for her rally but Discreet Marq held her off by 3/4 length in 1:47.38. It was another 3/4 length back to 6-1 Emotional Kitten third, and a length more to favorite Kitten's Dumplings fourth. 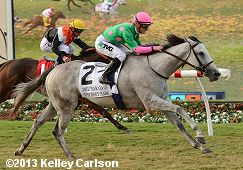 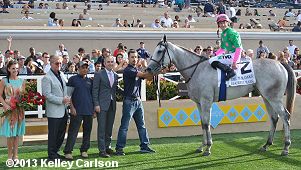 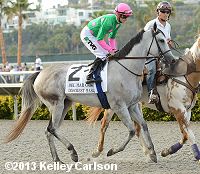 Left: Discreet Marq in the winner's circle. Winning jockey Julien Leparoux said, "Good filly. Good trip. It all worked out right today. The plan was to get her to relax; to get her in behind horses and get her to relax. She did that quite well. Then when I got her outside, she went. She was good. It was hard to take off (Need You Now). But what are you going to do. It's business I guess, and when you get a chance to ride a nice filly like this, you've got to go."

Right: Discreet Marq in the post parade. Christophe Lorieul, assistant to trainer Christophe Clement said, "This is very good for the owner and breeder (Patricia Generazio) and very good for us. The decision to come out here worked out well. The only question we had today was the distance. We told Julien (Leparoux) that the only chance we had today was to get her covered up, because she had been running on the lead in New York. We worked her from behind horses in New York and (rating) had been no problem. She's very rateable, she can do anything you want. That's why she's a very good filly. " 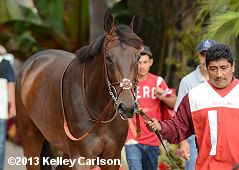 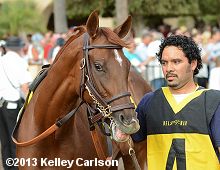 Left: Second place finisher Wishing Gate in the paddock before the race. Jockey Garrett Gomez said, "We had the good trip and she ran really well. They were going a little slow. I knew that, but there wasn't much I could do. She's improving; she's getting better. She's a nice filly."

Right: Third place finisher Emotional Kitten in the paddock. Jockey Victor Espinoza said, "I just couldn't catch that winner. I just couldn't. I was trying, but she couldn't get there." 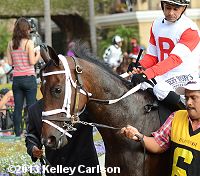 Fourth place finisher and beaten favorite Kitten's Dumplings in the paddock. Jockey Mike Smith said, "I got through on the rail. Followed Garrett (Gomez on Wishing Gate) through. My filly was running, but they weren't stopping."