Also on the Cigar Mile undercard was the Grade 2 $200,000 Demoiselle Stakes featured 2-year-old fillies going 1 1/8 miles on the main track. Trainer Richard Dutrow sent out a coupled two-horse entry of Sis City and K.D.'s Shady Lady, who were sent off as the prohibitive 4-10 favorites in a field of seven, with Salute the third choice at 3-1.

Sis City got a length clear out of the gate to lead the field around the clubhouse turn, getting the quarter in 24.55, when Jerry Bailey sent Salute up to challenge her to the outside. The two battled it out down the backstretch run, as Sis City continued with a half in 48.30 and 3/4 in 1:12.49. Turning for home John Velazquez asked Sis City for her best and got it, as she quickly surged to a 3 length lead in mid stretch, and continued on to win by 3 3/4 lengths over Salute in 1:50.39. It was just a nose back to Winning Season in third.

The other 2-year-old stakes on the card was the Remsen Stakes for the colts. 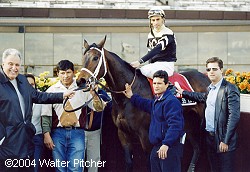 The connections in the winner's circle. Winning jockey John Velazquez said, "She relaxed early on. Going into the first turn, she put her ears up and relaxed really, really good. In the Breeders' Cup, we were going much faster than we were today; that's why she had so much left today."

Owner Sanford Goldfarb added, "Sis City is really maturing. We'll put her away for the winter and give her some time off on the farm in Florida. We want to have her fresh for the big races next year." 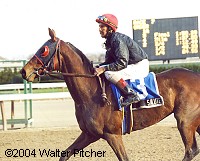 Second place finisher Salute returns after the race.
Back to Horse-Races.Net main page