The Grade 1 Cigar Mile closes out the fall meeting at Aqueduct before action shifts to the inner track for the winter. A field of eight went to post in this $350,000 event around the one-turn mile on the main track, with Pico Central the heavy favorite at 0.95-1. Going into the event, he was one of the contenders for the Eclipse Award for champion sprinter, but because he isn't Breeders' Cup eligible he was not entered at Lone Star Park to compete against Speightstown. Also in the field were 7-2 second choice Badge of Silver and 4-1 third choice Purge.

As expected, jockey Victor Espinoza sent the favorite straight to the front, as Pico Central and Purge battled on the pace down the backstretch. They went the initial quarter in 22.47, the half in 44.29, and 3/4 in 1:08.23, with Badge of Silver stalking them right behind in third. As they rounded the turn, 12-1 shot Lion Tamer came out four wide from last early on, and at the top of the stretch, drew even with Pico Central. With a furlong to go, Lion Tamer shook off the stubborn Pico Central and drew away to win by 1 1/4 lengths, in a time of 1:33.46 over the fast track. Badge of Silver dug in gamely in the final strides to nose out the favorite for second. Purge succumbed to the fast early fractions and faded to sixth.

Also on the card were the Remsen Stakes for 2-year-olds colts going 1 1/8 miles and the Demoiselle Stakes for the 2-year-old fillies at the same distance. 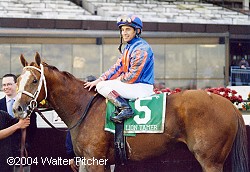 Lion Tamer in the winner's circle. His trainer Todd Pletcher said, "You know that Pico Central is a game horse. I was just worried that maybe Lion Tamer had gotten there too soon. But when you have momentum like that, you don't want to take it away. He was rolling along. "Lion Tamer will go down to Florida and play it by ear. (Stablemate) Purge was just a little too keen early on and he just got a little tired."

Asked about who should get the Eclipse Award, Pletcher added, "As far as champion sprinter goes, I think the one race that really solidifies the championship is the Breeders' Cup (Sprint). When you show up on a neutral playing field against everybody and win, if it is close, that's what separates the closeness. I obviously have a biased opinion, but I think if there is anyone out there that was on the bubble, maybe this sways them the other way." 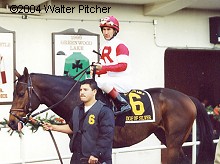 Second place finisher Badge of Silver heads out to the track before the race. His jockey Jerry Bailey said, "I couldn't stay with Lion Tamer around the turn, although he was trying. I think the winner kind of pulled up when he made the lead, but my horse never stopped trying. Maybe that gives you the impression that he might want to go on." 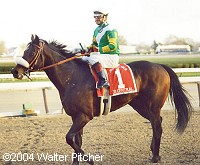 Third place finisher and beaten favorite Pico Central returns after the race. His trainer Paulo Lobo said, "He lost his right-back shoe. With the rail, there is no option. We talked before the race about trying to leave one or two horses in front of him, but from there, it was impossible. Aldebaran did the same thing last year, and he was sprint champion. Pico won the Vosburgh, Carter and the Met Mile. He ran the first three-quarters of the Carter in less than 1:08. Now, we'll have to wait until January )for the Eclipse Awards) We have no plans with him right now, but he will run next year."
Back to Horse-Races.Net main page