"Stars and Stripes Day" is the final Saturday of the Belmont Park spring-summer meeting. Conditions were excellent on Long Island with cloudy skies and temperatures in the low 80's, fast track and firm turf. The highlight race of the afternoon was the $1,000,000 Caesars Belmont Derby Invitational (G1) for 3-year-olds going 1 1/4 miles on the inner turf course. Nations Pride was sent off as the 5-2 favorite in the field of 12 off his 8th place finish in the Cazoo Derby (G1) at Epsom Downs after winning the Jumeirah Derby in Dubai. In to challenge him included 3-1 second choice Stone Age, sixth in the Cazoo Derby after winning the Derby Trial (G3) at Leopardstown, and 5-1 third choice Tiz the Bomb, 9th in the Kentucky Derby (G1) after winning the Jeff Ruby Steaks (G3). 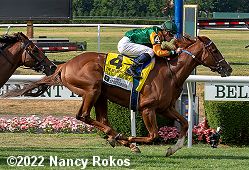 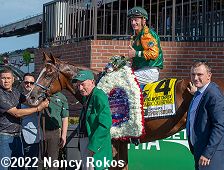 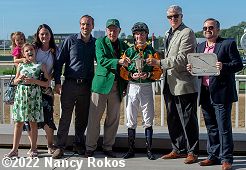 Left: Classic Causeway in the winner's circle. Winning owner Patrick O'Keefe said, "We knew he was pretty much the speed in the race. He's like a 14-year-old kid that can throw a baseball 100 miles per hour. Now, he's slowed down a little to 90 miles per hour and can hit the play. [Trainer Ken McPeek] is amazing. To me, he's a life send. I have someone who really knows the breeding and knows where to put them. I loved [the idea of running him on the turf]." He will go next in the Saratoga Derby Invitational on August 6.

Right: The trophy presentation for the Belmont Derby Invitational. 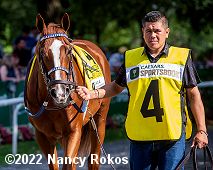 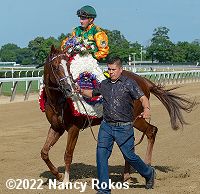 Left: Classic Causeway in the paddock before the race.

Right: Classic Causeway with his winner's blanket. Winning jockey Julien Leparoux said, "The plan was to go on the lead. The only time I was a little worried was in the first turn when Joel [Rosario aboard Royal Patronage] was kind of head-to-head with me. When he took back, my horse got to cruising and happy to be on the lead. I was getting him to relax nicely and switch off. It was a good run for him. He was actually feeling pretty fresh today. It was Kenny's idea to wheel him right back on the grass, and it paid off today for sure." 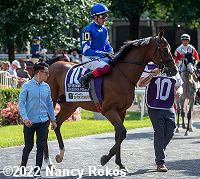 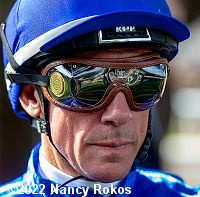 Left: Second place finisher and beaten favorite Nations Pride in the paddock before the race. Jockey Frankie Dettori said, "He got upset in the gates. I was the last one out and I had to play catch up then and go through traffic. The winner had a trouble-free run. If he jumped, it could have been a different story. In America, if you give too many lengths away at the start, you're going to pay at the end."

Right: Jockey Frankie Dettori in the paddock with his game face on. 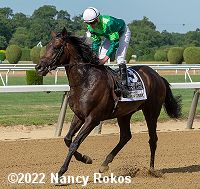 Right: Third place finisher Stone Age returns after the race. T.J. Comerford, assistant to trainer Aidan O'Brien said, "It's his first run in America, I'm sure he'll build on it. It's a good run back from his run in the English Derby. Ryan is happy with him and Aidan is happy with the run. When you're focusing on the draw like you do over here, it's probably an advantage if you're drawn in a bit for a European that you probably have a better chance of getting out and being able to sit where you want to sit. Before he ran in the English Derby, he was used to sitting handy and obviously he made [the pace] at Leopardstown. It probably was a factor but he still ran well. He came home well and we'll fight another day with him."


The $700,000 Belmont Oaks Invitational (G1) featured a field of 10 three-year-old fillies also going 1 1/4 miles on the inner turf. Cazoo Oaks (G1) fourth place finisher Concert Hall was sent off as the 3-1 favorite off her fourth place finish in the Pretty Polly Stakes (G1). In to challenge her included 11-2 second choice McKulick, second in the Edgewood (G2) and Regret (G3), and 6-1 third choice New Year's Eve, winner of the Edgewood. 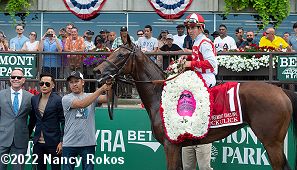 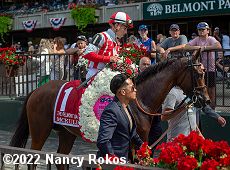 Left: McKulick in the winner's circle. Winning trainer Chad Brown said,  "She was really born to run 1 1/4. We were patiently waiting for a long time to get her to this distance, and my whole team did a super job with this horse in all divisions this filly has been in throughout this year. It's an extra special win with it being Bobby Frankel's birthday today.The irony and the importance of it today, on his birthday means everything to me personally. She's special and she finally got enough room to fully utilize that closing kick she has. Irad rode a beautiful race. He was lined up behind Haughty down the backstretch which I thought was a good decision by him. Haughty at least took them into the stretch, where he could take it from there."

Right: McKulick takes her walk down Victory Lane. Winning jockey Irad Ortiz Jr. said,  "I got a beautiful trip. I broke and followed the instructions – tried to save ground and let her get to some position. She broke sharp and she put me in a good position right in behind horses. I bided my time and saved some ground. At the 3/8 pole, I started asking her a bit and she just ran really good and nice. She responded really well and took off in the stretch and that was really nice. I think 1 1/4 miles [made the difference]. If you see in her last two races, she came running late past the wire and kept galloping out nicely." 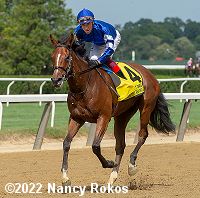 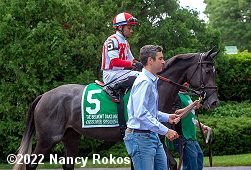 Left: Second place finisher With the Moonlight returns after the race. Jockey Frankie Dettori said,  "I had a good trip. I forced the issue at the three-eighths because we weren't going very fast and apart from one, she beat all the rest."

Right: Third place finisher Consumer Spending exits the paddock. Trainer Chad Brown said, "She ran terrific. Unfortunately she was bottled up too long or she clearly would've been second. She just missed. No fault of Manny's [Franco], it was just the way the trip lined up. I loved the trip actually. There just wasn't an opportunity in the stretch to put her where she likes to be. She was probably second best." 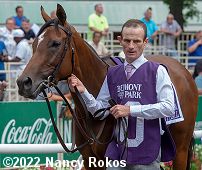 Fourth place finisher and beaten favorite Concert Hall in the paddock before the race. Jockey Ryan Moore said, "It might have been quick enough [ground] for her, she was just lugging in down the straight. They went hard and we had a nice run following the winner - just didn’t keep up with them, but she ran respectably."

Kicking off the Saturday stakes quartet was the $400,000 Suburban Stakes (G2) for older horses going 1 1/4 miles on the main track. Just five made final entry with Ben Ali (G3) runner-up Dynamic One sent off as the 9-10 favorite after winning the Blame Stakes. In to challenge him included 9-5 second choice First Captain, winner of the Pimlico Special (G3), and 5-1 third choice Untreated, third in the Pimlico Special.

Jockey Joel Rosario sent Untreated to the front through fractions of 24.90, 49.39, and 1:13.75 while pressed by 11-2 fourth choice Max Player and stalked by First Captain. Turning for home, Untreated tired allowing First Captain to move up and lead through 1 mile in 1:37.49. Dynamic One, last early under Irad Ortiz Jr., came out 4 wide to sweep to the lead through 9f in 1:51.43. First Captain moved up to challenge but Dynamic One held him off to win by a nose in 2:01.26. It was another 3/4 length back to Untreaated third. 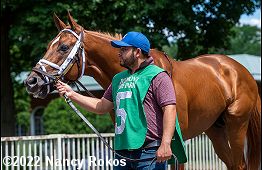 Left: Dynamic One in the winner's circle. Winning trainer Todd Pletcher said, "He has progressed and caught kind of a tough race first time back at Tampa and then we were at a starting point and felt like he would improve after that. He made a move forward at Keeneland and then put together probably his most professional race last time in the Blame. It seems like he just keeps getting a little better and he's starting to figure things out. He's a horse that we've always had high hopes for."

Right: Dynamic One in the paddock. Winning jockey Irad Ortiz Jr. said, "He's getting better. His mind is much better. He's starting to figure out the game and he's changed a lot. He's having a great mind right now, switched up [leads] when I wanted to and he let me do my thing. Then he turned it on when I wanted to. His mind is getting better and better every time. When he made the lead, he waited a little bit and then he fought back. We always liked him, but he could do some things that were a little green out there. I think the last three times [he ran], he's started to figure it out." 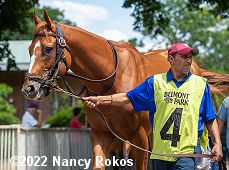 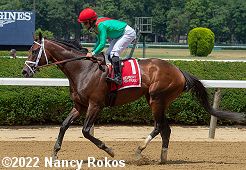 Left: Second place finisher First Captain in the paddock before the race. Winning jockey Luis Saez said, "He tried and he ran his race. He was battling, but the other one just got the jump. My horse tried pretty hard."

Right: Third place finisher Untreated returns after the race. Trainer Todd Pletcher said, "We decided after talking to Barry [Irwin, owner] that from the one-hole going a mile and a quarter with the start on the turn there that we might as well go ahead and secure our position. I thought we got a comfortable pace and the horse ran good. We were a little concerned with Dynamic One; how the pace scenario was going to set up for him. He's a horse that want's to settle and make one late run. In this case, you couldn't let him [Untreated] get too far away."

The $150,000 Victory Ride Stakes (G3) featured a field of 7 three-year-old fillies sprinting 6 1/2 furlongs on the main track. After two scratches just five went to post with Pretty Birdie sent off as the 7-5 favorite off second place finishes in the Eight Belles (G2) and Leslie's Lady Stakes both at Churchill Downs. In to challenge her included 5-2 second choice Sterling Silver, winner of the Bowerie Stakes, and 3-1 third choice Happy Soul, second in the Miss Preakness (G3).

Jockey Luis Saez sent 4-1 fourth choice Hot Peppers to the lead through fractions of 22.10 and 45.52 while pressed by Happy Soul and stalked by 8-1 longest shot Half is Enough. Turning for home Hot Peppers continued to lead through 3/4 in 1:10.98. Half is Enough continued to chase but Hot Peppers easily held her off to win by 3/4 length in 1:17.73. It was another 2 1/2 lengths back to Sterling Silver third, while favorite Pretty Birdie stumbled at the break and never recovered, finishing last beaten 37 3/4 lengths. 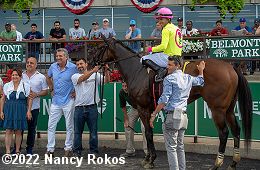 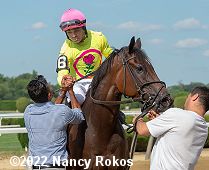 Left: Hot Peppers in the winner's circle. Winning jockey Rudy Rodriguez said, "She shows a lot of class and that's what you want to see in these kinds of races. I know most of the time there will be a lot of challenges, especially with her speed. They went 21 [for the quarter] and 45 [for the half], and I was kind of worried about the distance a little, but she hung in there and she prevailed. She showed what she can do. She's a 3-year-old and has all the indications. She passed this test, so hopefully we'll look forward to the Test (Stakes at Saratoga)."

Right: Hot Peppers returns after the race. Winning jockey Luis Saez said, "Today, she surprised me a lot because she went pretty fast and challenged the other ones. But she proved she can really run. She beat some nice fillies and I'm pretty happy with her. This filly I've been following for a long time. She's that kind of filly that always fights. If she's in a fight, she's pretty tough to get by. She always gives you everything she has and she did that today." 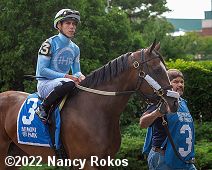 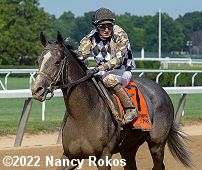 Left: Second place finisher Half is Enough exits the paddock before the race. Jockey Irad Ortiz Jr. said, "She ran big. She did everything right, but the winner was really nice. She was tough to get by."