Independence Day is one of the highlights of the Belmont Park spring-summer meeting, with 6 rich graded stakes run on Saturday afternoon. Conditions were excellent on Long Island, with sunny skies and temperatures in the mid 80's. The highlight race of the afternoon was the $1.25 million Belmont Derby Invitatational (G1) for 3-year-olds going 1 1/4 miles on the inner turf course. Bolo was sent off as the 2-1 favorite in the field of 9 off an allowance win on the Santa Anita turf after finishing 12th in the Kentucky Derby (G1). In to challenge him included 5-2 second choice Divisidero, winner of the American Turf (G2), and 6-1 third choice Takeover Target, second in the Penine Ridge. 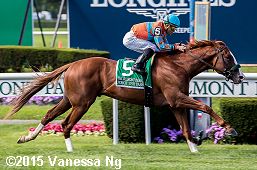 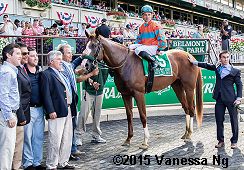 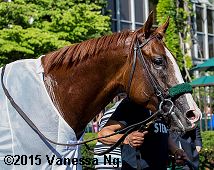 Left: Force the Pass in the winner's circle. Winning trainer Alan Goldberg said, "We were hoping early on for a dirt horse because he handled everything so well. Very professional. We brought him up here three days ago - he'd never been here before -  and he never turned a hair. We'll give him the summer off and look towards the fall."

Right: Force the Pass heads back to the barn after the race. Winning jockey Joel Rosario said, "He broke a little slow and then we were covered right away. It looked like we were going to be fourth going into the first turn, but we ended up being second or third. He was getting out a little bit going forward and I just tried to stay near the rail. As soon as I got to the three-eighths pole, I got room to go on the inside and just went forward and controlled the race from there." 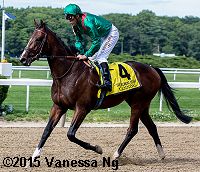 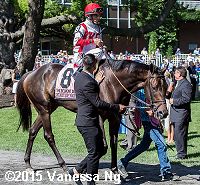 Left: Second place finisher Canndal returns after the race. The 9-1 shot raced 6th 6 lengths off the pace under Christophe Soumillon, then rallied to get second beaten 3 3/4 lengths. The Mikel Delzangles trainee improved his record to 1 win, 2 seconds, and 2 thirds in 6 starts, earning $284,722 for owner-breeder The Aga Khan. 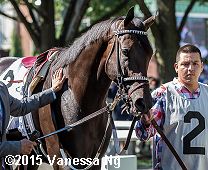 Last place finisher and beaten favorite Bolo in the paddock. The 2-1 favorite set the early pace under Rafael Bejarano but tired badly to finish last beaten 11 lengths, was pulled up and vanned off. An initial examination by track veterinarian Dr. Lisa Fortier found "nothing wrong". The Carla Gaines trainee has a record of 3 wins, 0 seconds, and 2 thirds in 8 starts, earning $288,700 for owners Golden Pegasus Racing and Earle I. Mack. 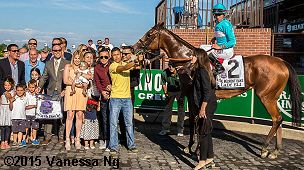 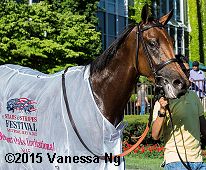 Left: Lady Eli in the winner's circle. Winning trainer Chad Brown said, "I didn't know how he was going to (get outside) with the two post, but I figured if the pace was quick enough - which it was - there'd be some separation and he could do it. That was our game plan and that was what happened. Once she got outside - there's never any certainties - I knew it wouldn't be the trip that got her beat. As we stretch out our turf horses, you wonder if they're going to lose their turn of foot. The term 'breathes different air' gets thrown around a lot when someone has a very good horse, and I've been lucky to have some great turf fillies and mares, but this one 'breathes different air' for sure."

Right: Lady Eli heads back to the barn after the race. Winning jockey Irad Ortiz Jr. said, "I had a perfect trip, no complaints. "We talked about the race in the morning, don't get in too much trouble in the race. We expected to have the best horse in the race so that's why we saved ground the first half of the race, but after that, I know nobody noticed us so I just took her out and looked behind and before the 1/2 mile I knew I had a lot of horse. Nobody put pressure on me and she took off." 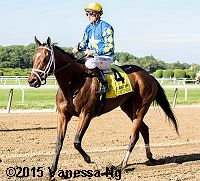 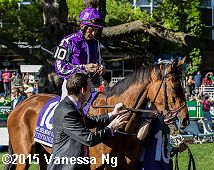 Left: Second place finisher Itsonlyactingdad returns after the race. Trainer Todd Pletcher said, "I was really pleased. I thought our filly ran really well. She kind of got squeezed from both sides leaving the gate and it caused her to get shuffled back a bit. I thought she closed really well. We were second best."

Right: Third place finisher Outstanding in the paddock before the race. The 11-2 second choice raced 6th 5 lengths off the pace under Colm O'Donoghue, then rallied to get second beaten 2 3/4 lengths. The Aidan O'Brien trainee improved her record to 2 wins, 0 seconds, and 1 third in 5 starts, earning $150,373 for owners Mrs. John Magnier, Michael Tabor, and Derrick Smith. 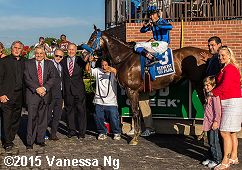 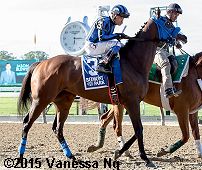 Left: Private Zone in the winner's circle. Winning trainer Jorge Navarro said, "Good performance, we were expecting this. It was a team effort, our plans were to give him some time off but he came back so good after the race [Grade 1, Metropolitan Mile]. We'll see how he comes out of this first, but our next target is the Forego."

Right: Private Zone in the post parade. Winning jockey Martin Pedroza said, "He broke so well. He always does, he's such a good gate horse. He's such a classy horse. As soon as he feels the competition, he just keeps going. Usually, if I go to the left-handed stick, he'll give me even more. But today, I didn't even have to go to the left.  Jorge has done a great job because when this horse opens up on horses, he can have the tendency to wait. Today, he just took off." 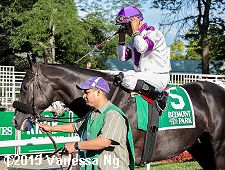 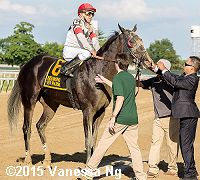 Left: Second place finisher Clearly Now in the paddock before the race. The 7-2 second choice raced fourth 4 lengths off the pace under Luis Saez early, then passed tiring horses to get second beaten 3 1/4 lengths. The Brian Lynch trainee improved his record to 5 wins, 5 seconds, and 5 thirds in 20 starts, earning $997,094 for owner Up Hill Stable.

Right: Third place finisher Stallwalkin' Dude returns after the race. The 7-1 third choice rated in third 3 lengths off the pace under Cornelio Velasquez but could not improve finishing third beaten 5 1/2 lengths. He improved his record to 11 wins, 3 seconds, and 4 thirds in 30 starts, earning $488,352 for owner-trainer David Jacobson.