New records in attendance and handle for Belmont Park and NYRA were set as Birdstone upset heavily-favored Smarty Jones in the 136th running of the Belmont Stakes on June 5, 2004. The attemdance was 120,139, up from the previous record of 103,222 set durind the 2002 Belmont Stakes.

Despite a weather forecast of rain, wind and below-average temperatures, the record crowd saw jockey Edgar Prado pull off another stunning Belmont Stakes upset. Birdstone, a 36-1 longshot, paid $74 for a $2 win wager. Two years ago, Prado guided Sarava ($142.50) to a record $2 win payoff when War Emblem made his bid for the Visa Triple Crown in the Belmont Stakes. Smarty Jones finished second to Birdstone as the shortest-priced Belmont Stakes favorite since Spectacular Bid in 1979. 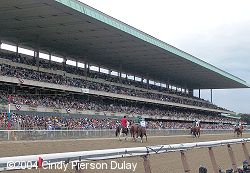 A view of the crowded stands from the infield. 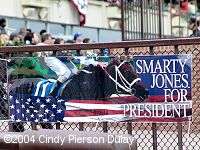 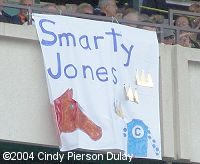 Smarty Jones was quite popular with the fans which means there were quite a few signs out rooting for him. 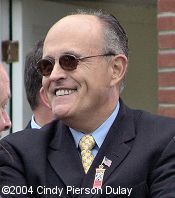 There were lots of Celebrities in attendance including Rudolph Giuliani, former mayor of New York City. 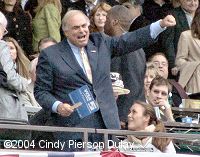 Fans from Philly were everywhere. Even Governor Edward Rendell of Pennsylvania was there to cheer for Smarty Jones. 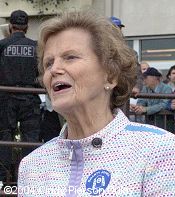 Penny Chenery, the owner of Secretariat, was on hand to present the trophy for the Riva Ridge Stakes and show her support for Smarty. 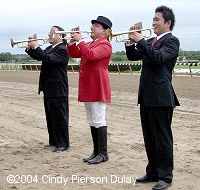 The Belmont Stakes Buglers performed the call to the post for each race. 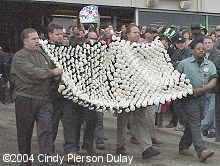 The blanket of white carnations being carried to the winner's circle. 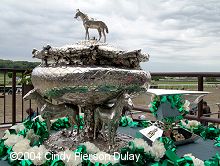 The Belmont Stakes trophy and the Triple Crown trophy. Alas the latter will have to go back in storage for another year and another dream.