The 2022 Breeders Crown, North American harness racing's year-end championships, are at Woodbine Mohawk Park in Campbellville west of Toronto. The 4 races for juveniles are run on Friday night with the remaining 8 championship races are run on Saturday. It was a typical fall evening in Southern Ontario, with clear skies, minimal wind, and a temperature of 7 C (44 F) at the start of the card, but this dropped down to 1 C (33 F) by the time the Colt and Gelding Pace result was declared official at 11PM. All Breeders Crown races are contested at the standard 1 mile distance, a 2-turn trip over Mohawk Park's 7/8 mile stonedust track rated fast. 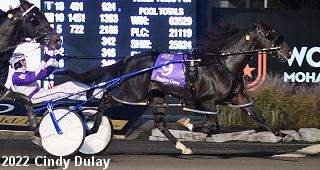 The highlight of the evening was the $600,000 (all purses U.S.) 2-Year-Old Colt and Gelding Pace, with a full field of 10 lining up behind the gate. Kentucky Championship Series winner Confederate was sent off as the 1-2 favorite over 5-1 second choice Handlelikeaporsche, winner of the International Stallion Stakes, and 11-2 third choice Stockade Seelster, winner of the Ontario Sires Stakes Super Final. 76-1 longest shot Ervin Hanover was quickest away through an opening quarter in 27 1/5 before Combustion took over down the backstretch through a half in 56 seconds and 3/4 in 1:23 3/5, pressed by 52-1 Ammo and stalked by Stockade Seelster. Turning for home, driver David Miller sent Ammo to the lead and he was all out to hold off late-running favorite Confederate to win by 1/2 a length in 1:50 4/5. It was another length back to 10-1 Combustion third. 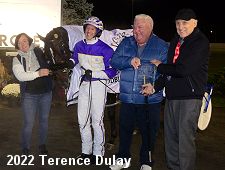 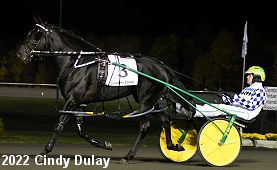 Left: Ammo in the winner's circle. Winning trainer Joe Holloway said, "I thought he raced well last week, and I thought racing him back in a week might suit him, and David just drove him great. And sometimes it works out. I tried to map it out for (Miller) as best I could, told him to do all that and then he just kind of handled it from the head of the stretch home. I think he knows his way around there." 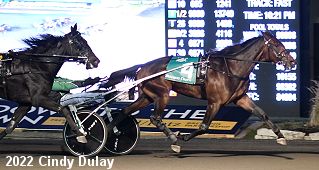 The $600,000 2-Year-Old Filly Trot featured a full field of 10, with Bluegrass Stakes winner Special Way sent off as the 1-2 favorite over 4-1 second choice Righteous Resolve, winner of the Ontario Sires Stakes Super Final, and 9-2 third choice Walner Payton, winner of the International Stallion Stakes. Driver Paul MacDonell sent Righteous Resolve to the lead first time by through fractions of 27 1/5, 56, and 1:24 1/5 while pressed by 26-1 Mambacita and stalked by Walner Payton. Turning for home, Righteous Resolve continued to lead but favorite Special Way, 4th early with driver-trainer Ake Svanstedt, came out wide into the lane and outfinished Walner Payton to win by 3/4 length in a new track and Canadian record time of 1:52. It was another 1 1/2 lengths back to pacesetter Righteous Resolve third. 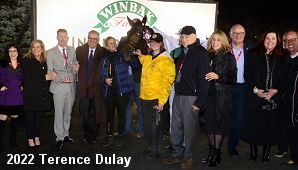 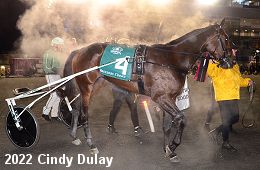 Left: Special Way in the winner's circle. Winning co-owner Marvin Katz said, "We trained the grandmother of this filly and her mother, it's a family we have a great deal of faith in and we developed together and that's what makes it exhilarating to develop something like this. [Winning a Crown race at his home track is] as good as it gets."

Right: A steamy Special Way returns after the race. Winning driver-trainer Ake Svanstedt said, "She's a great racehorse and gave me a strong race today. She's the best filly I've ever had." 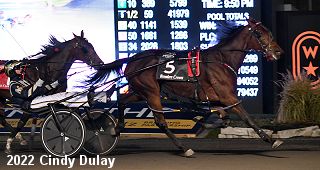 A full field of 10 contested the $600,000 2-Year-Old Filly Pace, with She's a Great Lady Stakes winner Sylvia Hanover sent off as the 1-2 favorite over 7-2 second choice Charleston, runner-up in the She's a Great Lady, and 6-1 third choice Strong Poison, second in both the Kentucky Championship Series and International Stallion Stakes. 47-1 Bellisima Hanover was quickest away through an opening 1/4 in 27 3/5 before driver Bob McClure sent favorite Sylvia Hanover to lead through a half in 57 seconds. On the far turn, driver Dexter Dunn moved Charleston wide to sweep to the front through 3/4 in 1:23 4/5, but Sylvia Hanover fought back to prevail by 1 1/4 lengths in 1:51 1/5. It was another 1 1/2 lengths back to Strong Poison third. 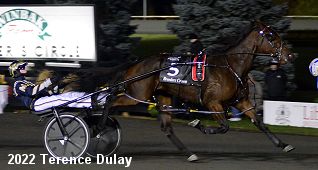 Left: Sylvia Hanover in the winner's circle. Winning driver Bob McClure said, "From the three-quarter pole on, there's no driving her. She gives you everything she's got. She's great leaving the gate, it's just that middle half. You can sit there and knock her down for that trait and the odd trait — she is finicky, she is lazy — but man, she definitely knows how to get her nose to the wire first. And she's proving it. If it weren't for the 11-hole one week, she would've been undefeated this year. I'm just extremely lucky to be along for the ride with her."

Right: Sylvia Hanover races in third first time by. Winning owner Tony Infilise said, "It's very, very special after all those decades of being in this. It's a fabulous business. It gives not as many highs as lows, but they're really worthwhile when they happen and this is a phenomenal one, probably our best in the business so far." 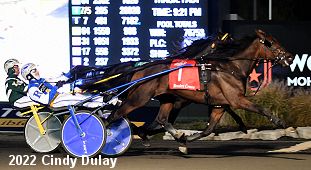 Kicking off the 2022 Breeders Crown, the $600,000 2-Year-Old Colt and Gelding Trot featured a full field of 10 with New Jersey Classic Stakes runner-up Celebrity Bambino sent off as the 7-5 favorite over 9-4 second choice Oh Well, winner of the Mohawk Million, and 7-2 third choice Gaines Hanover, winner of the Champlain Stakes. 34-1 Dire Straits was quickest away through an opening quarter of 27 2/5 before 15-2 Kilmister took over through a half in 57 and 3/4 in 1:25 4/5. Turning for home, driver Yannick Gingras sent Celebrity Bambino, 5th early, out wide to sweep to the front at the 3/16. However, Gaines Hanover and driver Louis-Philippe Roy rallied from 7th early to win by 1/2 a length in 1:53 2/5. It was another 1 3/4 lengths back to Kilmister third. 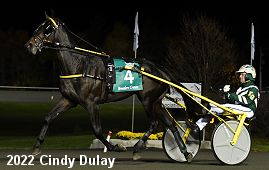 Left: Gaines Hanover in the winner's circle. Winning driver Louis-Philippe Roy, celebrating his first Crown win said, "It was great, the trip felt pretty good. I just had in my mind, I said, 'please win, we didn't do all that just for a second,' it was just a great moment. I feel like Yannick was the same way as me, we didn't want anyone in front to have too easy fractions, but we didn't want to have to use our horses too early. He knew he had a pretty good horse on his backside and he didn't want to tow me in too early. I think he drove his perfectly but mine, when he showed up, was a little bit better." 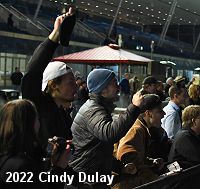 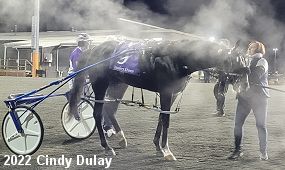 Left: Some of Gaines Hanover's connections cheer him down the stretch in the Colt Trot.

Right: It was very chilly so all the horses came by quite steamy like Ammo here in the Colt Pace. 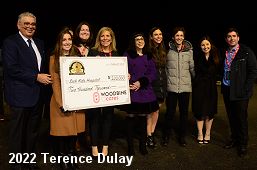 Left: Before the 4 Championship races on Friday, Woodbine Entertainment Group presented checks for the Breeders Crown Charity Challenge, won by Team Steve Heimbecker and driver James MacDonald (left) donating $62,250 to their chosen charity the Pine River Institute. Each team pledges the minimum $25,000 to their chosen charity, and additional money can be won through the Driver Challenge, Social Media Challenge, and donations from fans. Heimbecker said, "It's wonderful to be able to help out a charity of your choice, to raise money and awareness for them. It's just as win-win. That's the best way to describe it. If we're able to do these things, especially for one of the premier nights in Canadian and North American racing, it's a great venue to have these charities in the spotlight, using it as a platform to showcase some great causes."