The 2019 Breeders Crown, North American harness racing's year-end championships, are at Woodbine Mohawk Park in Campbellville west of Toronto. Unlike past renewals, this year the 4 races for juveniles are run on Friday night with the remaining 8 championship races run on Saturday. It was a typical fall evening in Southern Ontario, with cloudy skies and a temperature of 10 C (50 F) at the start of the card, but this dropped down to 5 C (41 F) by the time the Colt and Gelding Pace result was declared official at 11PM, with the fields facing a 9 km/h headwind in the stretch. All Breeders Crown races are contested at the standard 1 mile distance, a 2-turn trip over Mohawk Park's 7/8 mile stonedust track rated fast. 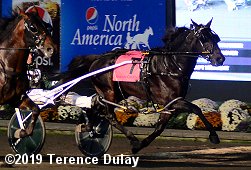 The highlight of the evening was the $600,000 (all purses U.S.) 2-Year-Old Colt and Gelding Pace, with a full field of 10 lining up behind the gate. Metro Pace runner-up and Kindergarten Stakes winner Papi Rob Hanover was sent off as the 6-5 favorite over 9-5 second choice Tall Dark Stranger, winner of his division of the International Stallion Stakes, and 7-2 third choice Capt Midnight, winner of the Champlain and the Metro Pace. Driver Yannick Gingras sent Tall Dark Stranger to lead through fractions of 27 3/5, 55 1/5, and 1:23 2/5 while pressed by 17-1 Cattlewash and stalked by Papi Rob Hanover. In the stretch, driver David Miller sent Papi Rob Hanover to challenge, and the pair bumped inside the 1/8 pole before Papi Rob Hanover pushed on to finish first by a head in 1:51. It was another 2 lengths back to Cattlewash third. Driver Gingras claimed foul againsty Miller for interference, and after a lengthy inquiry the judges agreed, disqualifying Papi Rob Hanover and placing him second, moving Tall Dark Stranger up for the win. In addition, driver Andrew McCarthy behind Capt Midnight (finished 5th) claimed interference against Doug McNair driving 4th place finisher 84-1 Mayhem Hanover. The judges also allowed this claim, moving Capt Midnight up to 4th and Mayhem Hanover down to 5th. 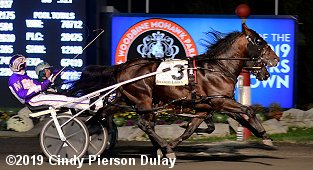 Left: Tall Dark Stranger in the winner's circle. Winning driver Yannick Gingras said, "My colt was fighting back. I haven't made an objection since Yonkers in 2002." 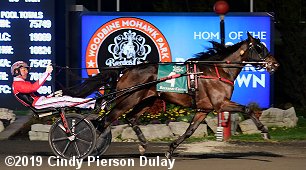 The $600,000 2-Year-Old Colt and Gelding Trot featured a full field of 10 with undefeated Peter Haughton Memorial winner Real Cool Sam sent off as the even-money favorite over 5-2 Amigo Volo, winner of the Bluegrass and International Stallion Stakes, and 13-2 Chestnut Hill, 2nd in the Kindergarten Classic. Driver Dexter Dunn sent Amigo Volo to a clear lead first time by through fractions of 26 4/5, 55 3/5, and 1:24 while pressed by 24-1 Third Shift and stalked by 8-1 Capricornus. Turning for home, Dunn asked Amigo Volo to draw off and he promptly opened up a 6 1/2 length advantage midstretch. 36-1 Rome Pays Off put in a strong late rally from 6th and very wide into the lane but was left with too much ground to make up as Amigo Volo cruised to a 4 1/4 length win in 1:54 3/5. It was another 1/4 length back to Chestnut Hill third, and another 3/4 to favorite Real Cool Sam fourth. 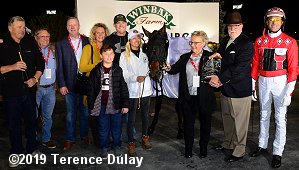 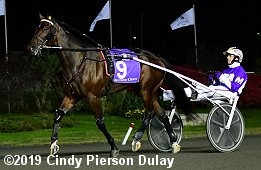 Left: Amigo Volo in the winner's circle. Winning driver Dexter Dunn, celebrating his first Breeders Crown win said, "That feels pretty awesome. We got away from the gate so good we weren't going to take any chances. We were pretty quick to the half, and then around the last turn other horses were dropping off so I took my shot." Trainer Richard "Nifty" Norman added, "He didn't get a chance to make a mistake tonight." 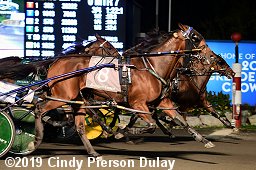 A full field of 10 contested the $600,000 2-Year-Old Filly Pace, with She's a Great Lady and Simpson Stakes winner Lyons Sentinel sent off as the even-money choice over 2-1 Priceless, winner of the Kentuckiana Stallion Management Stakes, and 11-2 New Year, winner of the International Stallion Stakes. Diver Brandon Bats sent Priceless to the front on the clubhouse turn through an opening quarter of 26 4/5 before Tim Tetrick moved Lyons Sentinel to lead down the back through a half in 53 3/5 and 3/4 in 1:22 1/5. Lyons Sentinel continued to lead to the 1/16 pole but driver Andrew McCarthy, 7th early behind 27-1 Reflect With Me, came out to the centre of the track for room and rallied to get up by a neck in 1:50 3/5. It was another neck back to 55-1 Marloe Hanover third. 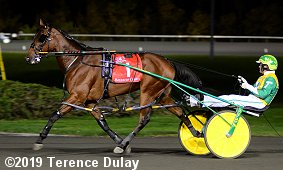 Left: Reflect With Me in the winner's circle. Winning driver Andrew McCarthy said, "She got a little tired near the wire but she kept on coming." WInning trainer Tony Alagna added, "I spoke with Andy before the race and we both felt there was a lot of speed inside." 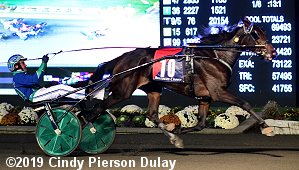 Kicking off the 2019 Championships was the $600,000 2-Year-Old Filly Trot. John Doherty Memorial and New York Sire Stakes winner Hypnotic Am was the 8-5 favorite in the field of 10 over 9-2 Ms Savannah Belle, second in the Bluegrass after winning the Kentucky Sires Stakes, and 7-2 Sister Sledge, 3rd in the Bluegrass then 2nd in the International Stallion Stakes. Driver Andrew McCarthy sent 15-1 Ramona Hill to the lead through fractions of 27 and 56 seconds flat while pressed by Sister Sledge and Hypnotic Am. On the far turn, driver Brian Sears sent Hypnotic Am to lead through 3/4 in 1:23 4/5, taking that lead into midstretch. Ramona Hill re-rallied late, taking over at the 1/8 pole and drawing off to win by 4 lengths over Sister Sledge in 1:53 2/5. It was a head back to favorite Hypnotic Am third. 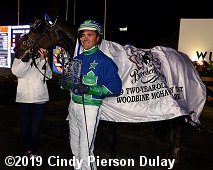 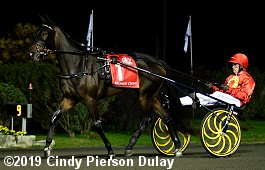 Left: Ramona Hill in the winner's circle. Winning driver Andrew McCarthy said, "She's so talented. She just wasn't quite herself last week. She was slick today. Leaving from the 10 hole I said I'm going to step her out to the front and I was not surprised she could leave so quickly. She was very smooth and good-gaited. She was pleasant today." Winning owner Robert LeBlanc, winning his first Breeders Crown race added, "When we got the 10 hole we were still positive, we thought she could still get it. We think she is just going to get better."

Right: Third place finisher and beaten favorite Hypnotic Am in the post parade.