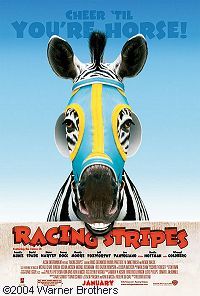 Racing Stripes is about an abandoned baby circus zebra named Stripes (voiced by Frankie Muniz) who is found and taken in by Kentucky horse trainer Nolan Walsh (Bruce Greenwood). Immediately, the young colt makes friends with Nolan's daughter, Channing (Hayden Panettiere), and they form a bond. He also meets an assortment of animals on the farm: An ornery Shetland pony named Tucker (voiced by Dustin Hoffman); a wise goat named Franny (voiced by Whoopi Goldberg); a displaced pelican named Goose (voiced by Joe Pantoliano); and many more (including a pair of wisecracking horseflies voiced by David Spade and Steve Harvey).

Stripes starts to harbor dreams of becoming a racehorse, but the local Thoroughbreds think it's all a big joke, making the striped wannabe even more determined to overcome prejudice and self-doubt to pursue his dream of running with the big horses.

This children's fantasy film is not only fun for kids -- track enthusiasts will be treated to one of the wildest horseracing scenes ever filmed. The screenwriter of the film, David Schmidt, is a bettor and that is actually how the idea for the movie came to him: "I love to go to the racetrack," he said. "That's where the Racing Stripes idea came from; Saturday night at Los Alamitos. I wish had a more glamorous story, but that's it. So yeah, I did my research betting on the track. The track is a really fun place to go, because everybody is the same class. You could be a surgeon or a truck driver, and you show up at the track and you're all there for the same buzz. It's bigger than life, it's fun, and you don't have to bet a lot of money. I just love to watch them run; they are beautiful."

The Thoroughbreds in the film are beautiful indeed, but it's the funny-looking little zebra who steals the show. While you might think that the striped animal actors were bred and raised for their big shot on the silver screen, you'd be thinking wrong -- trainer Steve Martin revealed, "We only brought one [domestic-born zebra] from the States onto the set in South Africa. All the rest of the zebras were just on the range. None of them were halter-broke. Some of them, we had to capture. We put up blinds and fences, fed the wild zebras into the blinds and then blocked them off." 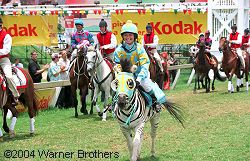 Since these once-wild zebras had to be safe around actors -- particularly the teenaged girl who would be riding -- a lot of work went into gentling the animals. "There is a whole process that goes into training an adult wild zebra," Martin explained. "First, just getting a halter on them. Then letting them drag a lead rope so they can just get used to feeling it. Then we take a hold of the lead rope, with one person behind them to them moving forward with another on the rope leading. And then just getting them used to being touched and petted, we sacked them out [a common desensitizing technique, also used with horses]. After that, they realize that we're not going to hurt them."

Hayden Panettiere, the young actress cast as the zebra's jockey, hadn't had much horse-riding experience before taking on the role of Channing. Prior to casting, she took a "horse test" (kind of like a screen test) and promptly fell off her mount! But it was her mettle in getting right back on that won her the role. She learned to ride a horse in all three gaits with proficiency, then graduated to the plains ‘ponies'. Panettiere said, "Riding a horse and a zebra is two totally different things. Because, like, when you race, when you're in a jockey position, you've got a horse's neck to brace on. When you're on a horse, it feels like they are moving forward. But on a zebra, it feels like you're going from side to side. They waddle. It's very difficult to get them to go in a straight line at any time, because they do like to zig-zag. Also, they don't have much of a neck, so when you go to lean on it, you feel like you're going to go right over the front." Still, she said it was an exhilarating experience, and she came to love the main zebra she rode, Sammy.

Once filming wrapped, the once-wild zebras were turned out on a predator-free preserve. "If the studios decide to do a sequel, we'll just go back down and re-acquire those same zebras," said Martin. "We'll probably have to start almost from scratch to halter break them again, and get them used to being handled again."

Staci Layne Wilson is the author of Staci's Guide to Animal Movies, which includes an extensive list of horse and horseracing films. Find it at Amazon.com or read an excerpt here.