On Friday at Belmont Park was the proverbial calm before the storm, in more ways than one. Two graded stakes events were conducted under mostly sunny skies before a modest crowd of 12,278, as racing fans await the Belmont Stakes where rains are in the forecast. The Grade 1 Acorn Stakes featured eight top three-year-old fillies competing over a one-turn mile on the main track. Society Selection was sent off as the 2-1 favorite over 3-1 second choice Victory U.S.A. and 4-1 third choice Island Sand.

When the gate opened, 13-1 longshot Bohemian Lady was sent to the front and led the field through initial fractions of 23.52, 45.95 and 1:09.95 saving ground along the rail as 7-1 shot Friendly Michelle battled with her just to her outside. Turning for home, the very fast pace took its toll on the two speedsters, setting the race up perfectly for the closers. Island Sand, who was outrun in seventh early, split rivals wide on the turn and rallied strongly through the stretch to win by 1 3/4 lengths over favored Society Selection, who closed from last but was no match for the winner. The winning time was 1:34.89 over the fast track. It was just a nose back to Friendly Michelle in third, while Bohemian Lady tired badly and finished seventh. It was the first Grade 1 win and first win in New York for both jockey and trainer. 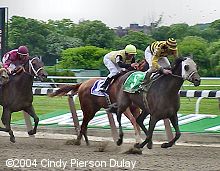 Heading down the stretch to the finish with Island Sand drawing away. Winning trainer Larry Jones said, "This is my biggest win, absolutely. And where better to win it than in New York? This is my first start ever in New York, and I like the way it started. Terry (Thompson, jockey) was very patient and he had her rolling when he hit the wire. She'll go back this time, and if everything goes well, we may leave her here." She will make her next start in the Grade 1 Mother Goose Stakes on June 26." 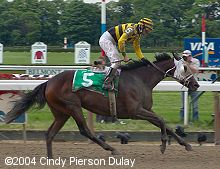 Island Sand and jockey Terry Thompson at the finish. Thompson said, "This is my first mount at Belmont. It set up just like we talked about. We didn't want to get pushed back like the Oaks; the gate hurt us that day. I knew there were like four or five out there cooking. In the turn I went ahead and swung down because it was a short field, was able to get inside of two horses and ease on down at the top of the stretch. It was just the perfect trip." 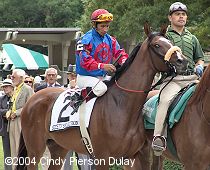 Second place finisher Society Selection before the race. Her trainer Allen Jerkens said, "She ran very well. I thought she actually got a little tired at the end, but she ran her heart out. As long as she's okay, we'll go on to the Mother Goose." Jockey Jorge Chavez said, "She went hard, but she ran a little too short. When I took her to the outside a little bit, she had a little run left in her. She tried hard, but the winner was much better." 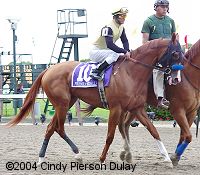 Third place finisher Friendly Michelle, with Alex Solis up, in the post parade. She hung on for third after being on the pace the entire race. 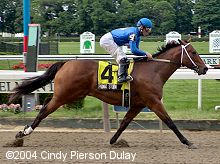 On the undercard of the Acorn was the Grade 3 Flash Stakes for two-year-olds sprinting 5 furlongs on the main track. 4-5 favorite Primal Storm ran to expectations, going gate to wire to win going away by seven lengths in 57.49 over 5-1 shot Winning Expression. Primal Storm survived a stewards' inquiry to keep the victory.
Results Chart from Equibase. 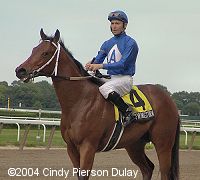 Primal Storm and Shane Sellers returning to the winner's circle. Sellers said, "He broke well. We ran right into that turn, and I guess Edgar (Prado, aboard Winning Expression) wanted to get in there, but I had to hold my ground and we got a little tight. It doesn't take a rocket scientist to ride these kind of horses. All we wanted to do was stay off the rail."